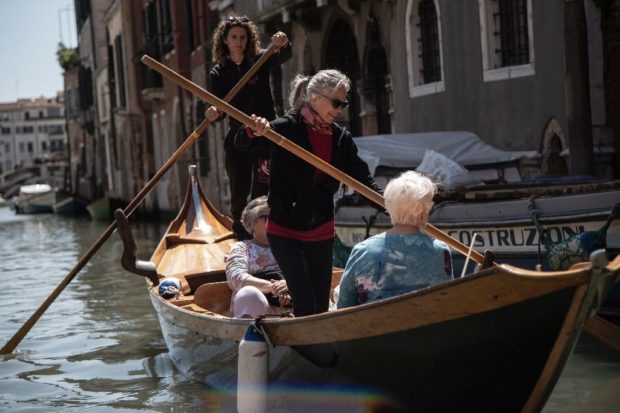 The Row Venice organisation is a group of women who teach tourists how to row Venetian style, standing up. Image: AFP/Marco Bertorello

“Big wave incoming, use your legs!” shouts Gabriella Lazzari, as her laughing students try out their new gondolier skills in the sunshine of Venice’s lagoon.

Lazzari is one of some 20 women who teach tourists from around the world how to row standing up, Venetian style, in “Batela coda di gambero,” shrimp-tailed wooden boats.

“We take them out to the lagoon so they can do the gondoleering part without crashing into everybody,” said Jane Caporal, who founded the Row Venice organization more than eight years ago in a bid to save the “voga alla veneta” style of rowing.

“Obviously Venice is motorized now, so people don’t row around in their little boats anymore,” Caporal said. “The idea is to save the tradition. Not just the actual rowing, everything, the boat building, the oar making, the forcola (oar rowlock) making, crafts that have been going for centuries and centuries.”

Accountant Yezi Jin shrieks in delight as she drives the blade into the water and propels the boat forwards, far from the peaceful canals of Italy’s floating city, in the vast open waters where Vaporetto waterbuses sail back and forth.

“It is hard work, my back’s aching, but it is great fun!” the 32-year old from Portland in the United States said, as her husband, gripping his own oar tightly, tried valiantly to match her pace.

“We see all the islands here, it is very different from the Rialto Bridge or being in the crowds,” Jin added.

Most of the women who teach “voga” also race professionally and Row Venice sponsors them.

Caporal sees it as a way of attempting to level the playing field in a sport and profession dominated by men.

“There is currently only one female gondolier in the whole city. She has had to fight tooth and claw for her share of the 20 million tourists who visit the Serenissima each year,” Caporal stated.

“The number of people certified as gondoliers is controlled by the gondoliers’ association, it is a tightly-closed shop with Row Venice we have carved out space for women to work too,” she added. 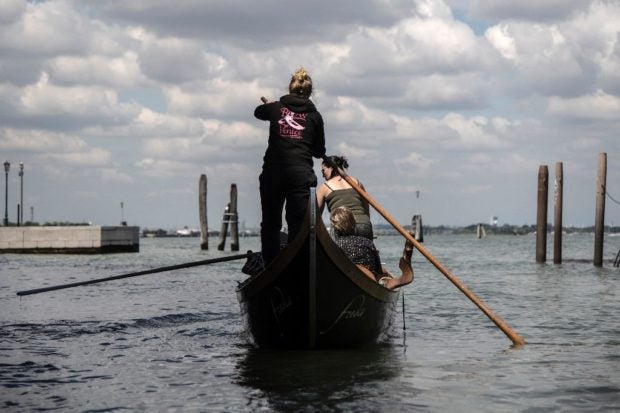 Row Venice aims to preserve tradition, both of the rowing style itself, but also the crafting of the ‘batela,’ a traditional workboat now out of production. Image: AFP/Marco Bertorello

The British-born Australian, who has lived in Venice for 30 years, said she picked the batela, a traditional workboat now out of production because it is more stable than the asymmetrical gondola and easier to maneuver.

“I came across one that was sold to me by a rowing club, it had been out of use for years. It was made by a master craftsman who had seen this kind of boat as a boy and remembered it,” she said.

The former stockbroking analyst fell in love with it and was ready to shell out 14,000 euros (about P800,000) for a replica to be made.

But the master craftsman died. With no one left alive who knew how to make them, the boat builders had to get the plans from the city’s naval history museum.

“It is a pleasure to enable tourists to live Venice by water, and explain the pollution and high-water problems,” said Lazzari, in reference to the damage cruise ships cause to the fragile ecosystem and floods that leave Saint Mark’s Square underwater.

Just a week ago, a massive cruise ship lost control, crashing into the wharf and sparking fresh controversy over the damage the huge vessels cause to the city.

“I tell them about the types of boats there used to be, like the mascareta, so-called because it was used by masked ‘working women,’ or the gondolas, which were the taxis of the rich,” Lazzari added.

The Doges of Venice, the Republic’s rulers until the 18th century, boasted golden, two-deck ships which were used yearly in a “Marriage of the Sea” ceremony, which symbolically wedded Venice to the water.

Row Venice pays tribute to the carnival city’s heyday by sponsoring parties held on boats in the lagoon on summer nights.

By day, its craft glide peacefully past ducks diving for crabs and disused boatyards transformed into canal-side gardens.

“It was a dream come true,” said Alice Hendricks, 71, her eyes sparkling as she gets out of the batela after her first lesson.

“It was very challenging, it looks so easy when you watch the gondolieri doing it but after a few tries with it, you kind of get a feeling for it. It is a joy,” she said. HM/JB

Malaysia fights to save centuries-old creole