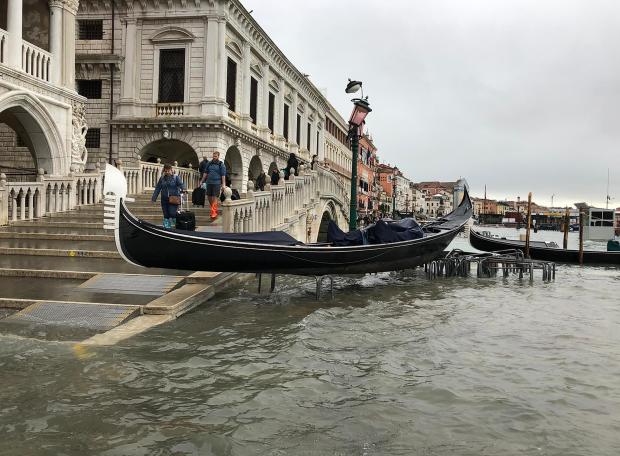 A gondola is stranded atop a bike rack after high tide in Venice, Italy, Wednesday, Nov. 13, 2019. The high-water has flooded most of the city over the past few days, hindering thousands of tourists and causing widespread damage for Venetians who are used to living on the water’s edge. (Photo by Alessandra Rallo via AP)

MILAN — The mayor of Venice is blaming climate change for flooding in the historic canal city that has reached the second-highest levels ever recorded, as another exceptional water level was recorded Wednesday.

The high-water mark hit 187 centimeters (74 inches) late Tuesday, meaning more than 85% of the city was flooded. The highest level ever recorded was 194 centimeters (76 inches) during the infamous flood of 1966.

A man in his 70s died on the barrier island of Pellestrina, apparently of electrocution, said Danny Carrella, an official on the island of 3,500 inhabitants. He said the situation there remained dramatic, with a meter (more than 3 feet) of water still present due to broken pumps.

Photos on social media showed a city ferry, taxi boats and gondolas grounded on walkways flanking canals. At least 60 boats were damaged in the floods, according to civil protection authorities, including some pedestrian ferry boats.

Floodwaters inundated the famed St. Mark’s Basilica, raising anew concerns over damage to the mosaics and other artworks. The electrical system at La Fenice theater was deactivated after waters entered the service area, and firefighters brought under control a blaze in the Ca’ Pesaro modern art gallery, caused by a short circuit

Officials said a second exceptional high of 160 centimeters (63 inches) was recorded at midmorning Wednesday, but was quickly receding.

“Venice is on its knees,” Mayor Luigi Brugnaro said on Twitter. “St. Mark’s Basilica has sustained serious damage like the entire city and its islands.”

The head of the Venice hotel association said the damage was enormous, with many hotels losing electricity and lacking pumps to remove water. Tourists with ground floor rooms were had to be evacuated to higher floors as the waters rose Tuesday night, the association director Claudio Scarpa told ANSA.

Brugnaro blamed climate change for the “dramatic situation” and called for a speedy completion of a long-delayed project to construct offshore barriers.

Called “Moses,” the moveable undersea barriers are meant to limit flooding of the city, caused by southerly winds that push the tide into Venice. But the controversial project opposed by environmentalists concerned about damaging the delicate lagoon eco-system has been delayed by cost overruns and corruption scandals, with no launch date in sight.

Luca Zaia, governor of the Veneto region, told SkyTG24 that the barriers were almost complete, but it wasn’t clear if they would work against such flooding.

“Despite 5 billion euros underwater, St. Mark’s Square certainly wouldn’t be secure,” Zaia said, referring to one of Venice’s lowest points that floods when there is an inundation of 80 centimeters (31.5 inches).

Brugnaro said that the flood levels represent “a wound that will leave indelible signs.”

Across the Adriatic Sea, heavy storm and sweeping winds also collapsed caused floods in towns in Croatia and Slovenia.

In the Croatian town of Split, authorities on Wednesday said that the flooding submerged the basement area of the Roman-era Diocletian’s Palace where emergency crews battled to pump out the water.