Duterte’s health has been a recurring issue in 2019 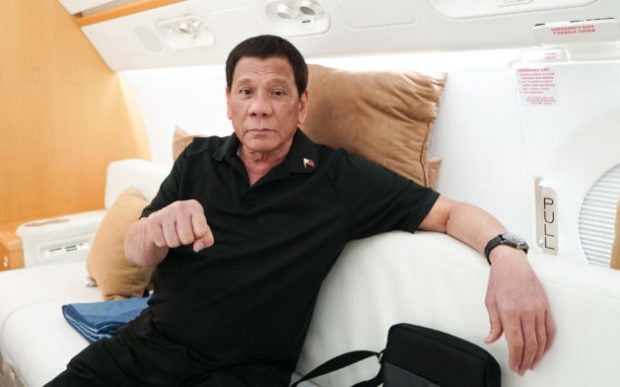 President Rodrigo Roa Duterte flashes his signature pose while onboard a plane bound for the People’s Republic of China at the Villamor Air Base in Pasay City on August 28, 2019. (Photo by KING RODRIGUEZ / Presidential Photographers Division)

MANILA, Philippines — President Rodrigo Duterte has admitted that his office has been taking its toll on his health. Why not? Duterte, now 74, was the oldest Filipino to be elected president.

The firebrand leader has admitted publicly that he has, among other things, Buerger’s disease and Barrett’s esophagus, and that had been experiencing occasional headaches and has spinal issues which he attributes to a motorcycle accident when he was 68 years old.

He has also admitted to taking sleeping pills and Fentanyl, which is 50 to 100 times more potent than morphine.

And as open as he projects to be, he revealed to experiencing constipation and having myasthenia gravis, an autoimmune disease that destroys muscle receptors and can result in the drooping of eyelids, or overall weakness.

Duterte’s state of health has been a recurring issue in his presidency given his advanced age. But in 2019, his health became a bigger issue due to his continued absences in his public engagements, aggravated by a motorcycle accident last Oct. 16.

Overall, Duterte skipped at least eight events in 2019 due to varying reasons connected with his health.

Duterte was supposed to attend the Barangay Summit on Peace and Order in Palo, Leyte. However, his longtime aide and now Sen. Christopher “Bong” Go had told reporters that his boss could not make it to the event because he was “not feeling well.”

Duterte was supposed to lead the distribution of Certificates of Land Ownership Awards (CLOAs) to Agrarian Reform beneficiaries in his hometown Davao City.

He was also set to lead the PDP-Laban campaign at the Crocodile Park Grounds in Barangay Ma-a later that day.

However, he skipped both events because, according to Go, he was “indisposed.”

Duterte skipped the Boao Forum for Asia Manila Conference in Taguig because he was “not feeling well” due to his punishing schedule, his spokesman, Salvador Panelo, said.

During a visit to China in April, the President skipped a gala dinner hosted by Chinese President Xi Jinping at the Great Hall of the People in honor of the visiting heads of state and other world leaders who attended the Belt and Road Forum.

According to Panelo, Duterte had a “migraine,” forcing him to miss the event.

The President also stood up the grand rally of  Hugpong ng Pagbabago in Davao City early this year.

His daughter, Davao City Mayor Sara Duterte-Carpio, announced during the rally that the President watched the event via livestream but couldn’t make it in person.

She did not explain his father’s absence, but Go later told reporters Duterte was resting becasue he was “tired” and had to rest.

Again, Duterte was “indisposed” and “not feeling well” on this day, prompting his absence from the National Heroes Day rites at the Libingan ng mga Bayani.

For the first time since assuming office in 2016, Duterte skipped the change of command ceremony of the Armed Forces of the Philippines (AFP) as he was suffering a “fever.”

What could be Duterte’s most controversial absence this 2019 happened in Japan after he missed two state banquets hosted by the two top Japanese officials during the enthronement of Japanese Emperor Naruhito.

Duterte cut short his Japan visit in October after complaining of “unbearable” back pain following his Oct. 16 motorcycle accident.

‘No need for medical bulletin’

In an interview in Malacañang last Oct. 28, days after a medical consultation due to his back pain, Duterte said there was no need for him to disclose his medical bulletin to the public.

READ: Duterte: No need for medical bulletin even if back still hurts

“That is not in the [law]. That’s not needed. If I can no longer stand up, my wife would tell you,” he said in Filipino.

This was despite Malacañang’s claim that the President will inform the public of the results of his supposed medical consultation.

Asked how he was feeling after his Japan trip, Duterte had a cryptic answered in Filipino: “The doctor told me to keep quiet… I walk straight when there are people someone nearby. But when I’m alone, ‘ayay.’”

Duterte admitted that his back still hurt then but refused to divulge more details of his condition.

“Ah it requires a lengthy explanation. Actually, the muscle spasm must be precipitated by something. A muscle spasm by itself is not really nothing. There has to be something which… I don’t want to tell you now. But then again it’s connected with the spinal cord,” he said.

According to Panelo, Asean leaders were “commenting” on the President’s state of health during the biannual meeting on Nov. 2 to 4.

They said, according to Panelo, that Duterte looked “overworked” during the regional meet.

After the ASEAN Summit, Go revealed that Duterte had been planning to take a week-long break to rest, but he was quick to assure the public there WAS nothing to worry about the President’s health.

Panelo confirmed this, even claiming that Duterte had assigned Executive Secretary Salvador Medialdea to take over for three days while he was resting.

READ: Duterte to work in Davao City for 3 days

However, the Palace official later announced that Duterte “declined the suggestion of well-meaning friends to have a rest for a few days” and would instead continue to work at home in Davao City.

“While the demands of pressing work that go along with the highest position of the land are unceasing, the people can rest assured that the President can keep up with the same and is in the best position to know how he can maintain to be on top of his health,” Panelo said.

Known for his unorthodox working schedule that usually starts in the afternoon and can go on well beyond midnight, Duterte has been projecting himself to be a “transparent” leader.

However, Malacañang’s refusal to make public his medical bulletin, coupled by his several disappearances from public view, has repeatedly fuelled rumors about his declining health.

Panelo had been saying that there was  no need to release a medical bulletin on the President’s health, stressing that the Constitution only requires a health dispatch in case of a “serious illness.”

“It (medical bulletin) comes only when there is a serious illness, that’s the constitutional provision,” Panelo said in a Malacañang briefing last Oct. 25.

Section 12 of Article VII of the Constitution reads: “In case of serious illness of the President, the public shall be informed of the state of his health. The members of the Cabinet in charge of national security and foreign relations and the Chief of Staff of the Armed Forces of the Philippines, shall not be denied access to the President during such illness.”