DAVAO CITY – President Rodrigo Duterte was a no-show p at the Hugpong ng Pagbabago grand rally here Friday night, but asked the public, through her daughter, Mayor Sara Duterte-Carpio to vote for the HnP senatorial candidates in the May 13 midterm elections.

The President was scheduled to speak at the rally at the San Pedro Square here at 8 p.m., where 12 of the HnP senatorial candidates took turns addressing the crowd. 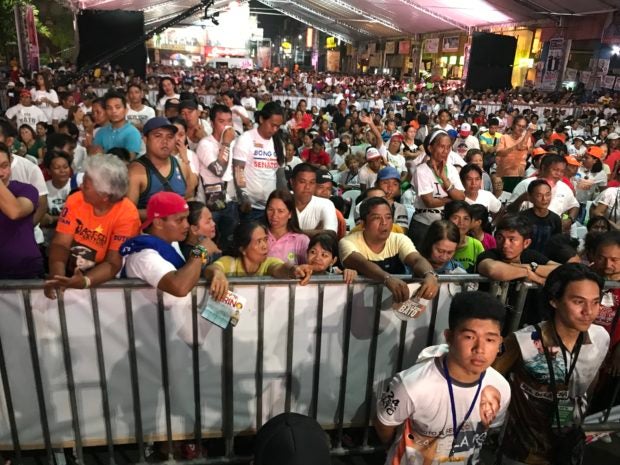 Hugpong ng Pagbabago supporters at the grand rally in Davao City on Thursday, May 9, 2019.  Photo by Germelina Lacorte / Inquirer Mindanao

By 9 p.m., when the President still failed to show up, Duterte-Carpio told the crowd that her father had been watching the livestream of the rally and apologized for failing to show up at the rally.

“The President asks for your patience because he can’t make it to this event,” Sara said in Cebuano,

“He is watching us through livestream. But he asks you to vote for the 12 senators on Monday, election day,” she said as she named each of the 12 senators that HnP is supporting.

Duterte-Carpio did not say if her father was watching the livestream in Manila or in Davao City.

Despite a heavy downpour, thousands of Duterte supporters trooped to the rally venue. /gsg