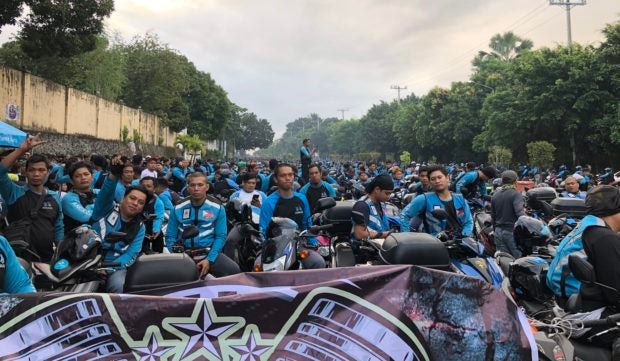 In a sea of blue and black – the color of their long-sleeved shirts and helmets, Angkas motorcycle-riders obscured White Plains Avenue, which is adjacent to the Kalayaan Shrine, in Quezon City, on Sunday, December 22, 2019, to protest a government regulator’s new policy that could leave 17,000 of them jobless starting December 23, 2019. INQUIRER.net/Daphne Galvez

MANILA, Philippines — Marte Dioso had no sleep. He also dropped his chance to earn P1,500 today just to make a stand against a government regulator’s policy that could render him jobless starting tomorrow, December 23.

Dioso, along with his fellow Angkas biker-partners, assembled Sunday morning at the Kalayaan Shrine along Edsa to protest the 10,000 bikers limit the Land Transportation Franchising and Regulatory Board (LTFRB) would impose as it extended the pilot run for motorcycle taxis to another three months.

The 38-year-old family man camped out at the shrine since 11 p.m. Saturday to make sure he’d be present at the demonstration that started at 7 a.m. the next day.

(Christmas is coming then we will lose our jobs. That’s why we went here to make our voices heard.)

In a sea of blue and black – the color of their long-sleeved shirts and helmets, Angkas motorcycle-riders obscured White Plains Avenue, which is adjacent to the Kalayaan Shrine, in Quezon City.

LTFRB on Friday announced it would extend the Motorcycle Taxi Pilot Implementation for three more months – from December 23, 2019, until March 23, 2020.

It also said two new motorcycle service providers will join Angkas in its operation in the National Capital Region.

According to Dioso, who has been working as a full-time Angkas rider since 2017, he could be one of those 17,000 riders. And it’s worrying him because the day-to-day needs of his family depend on his sole source of income.

(We are worried because we are not sure if we will be among the 17,000 bikers that would lose jobs. That’s why we are here to support the protest because what we want is nobody will be removed.)

(We are saddened and afraid, too. We are not afraid for ourselves, we are afraid for our families as well as for those commuters who are forced to take chances on other [transport service] which safety is not ensured.)

“It took us three years to build up the infrastructure to monitor the 27,000 riders tapos ang gusto nila mangyari, paspasin at ibigay ‘yung 10,000 sa bagong players in three months,” Royeca said in a press conference in Quezon City.

(It took us three years to build up the infrastructure to monitor the 27,000 riders and what they want to happen is to fast-track the process and give 10,000 slots to new players in only three months.)

“Is this safe? Does this show any safeguard or erring on any side of caution? Hindi po ito monopoliya. Safety po ang pinu-push natin (This isn’t monopoly. We are pushing for safety),” he added.

Angkas then claimed the approval of two new players to participate in the pilot run only took less than a month.

(It only took less than one month for the new players to get approval and be part of the pilot run. What do they have and know to be able to accomplish this? What kind of standard is being expected of them?)

Angkas also questioned the rationale in lowering the rider limit of Angkas from 27,000 to 10,000. It asserted that it has already proved during the initial pilot run that it is “running safe” with 99.97% safety record.

“There is no point to lower the cap and reallocate to give way to other players. They can increase the cap to give way and accommodate other players but why cut down our cap?” Royeca pointed out.

Angkas further said LTFRB’s new guidelines were issued without first undergoing public consultation as well as discussions with stakeholders such as civil society groups and transport advocates. It noted the technical working group (TWG) that deliberated on the latest motorcycle taxi guidelines were only composed of government agencies such as the Department of Transportation and LTFRB.

Angkas slammed as “corruption” and “anti-competition” the new LTFRB guidelines on the motorcycle taxi pilot run.

(Why was the evaluation expedited? Why were all stakeholders removed from the discussion? Why are they pushing for the 17,000 bikers to be out of jobs?)

“That is not right and that is anti-competition to force our bikers to leave Angkas by way of regulation,” he added.

But in an earlier statement, LTFRB denied Angkas’ claims that 17,000 riders stand to lose their jobs amid the new guidelines. It said it is “untrue and without basis” as the affected riders can be absorbed by the two new players during the pilot implementation.

TWG chairman and LTFRB board member Antonio Gardiola Jr. explained that the government allowed two new players to participate in the pilot run so that data from the study will not be “monopolized” by Angkas. He also said it will give commuters more options on ride-hailing firms.

(We added two new TNCs so that the data will not be monopolized by participants in this study.)

(It is not the economy or job of riders that are being studied here, that’s why the subject of the study should be the one being discussed here.)

Nevertheless, Royeca said Angkas will comply although “in protest” to the new guidelines of the pilot run, including the 10,000-biker limit. He also stressed that Angkas will “exhaust all remedies” to keep its 27,000-strong workforce intact.

“This is too fast. Sobrang bilis from the order to the implementation. Walang transition. Hindi pa kami nakakapagplano pero nakahanda kami na protektahan at bigyan ng tulong ang riders namin,” lamented Royeca about the short notice on the implementation of the guidelines under the extended pilot run.

(The implementation is too fast. There is no transition. We have not planned yet as to what will happen but we are ready to protect our riders.)

Angkas then urged the Senate and the House of Representatives to look into “irregularities” in the TWG involved in the crafting of the new pilot run guidelines.

“I believe there are irregularities on the TWG. I believe that the government, the Congress and Senate should take a look into this. I believe the procedures are highly irregular and my suspicion is something happened here,” Royeca said.

The motorcycle ride-hailing service likewise appealed for transparency in the LTFRB’s findings during the initial six-month pilot run, which was conducted since June and was supposed to end on December 26.

Riders warn of going back to ‘habal-habal’ amid LTFRB’s 10,000 bikers limit