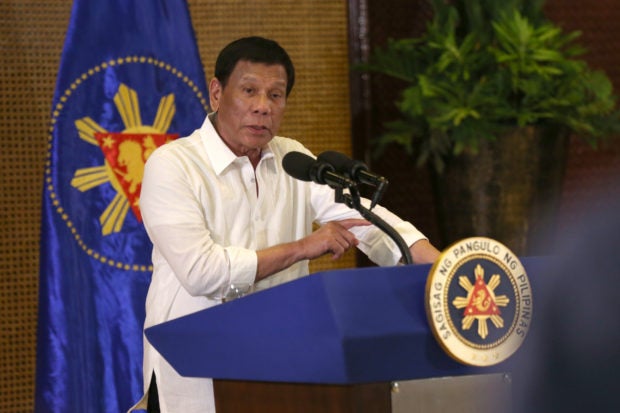 MANILA, Philippines — It seems that President Rodrigo Duterte does not take too kindly to praises from his critics.

Inquirer columnist Solita Monsod, a former socioeconomic planning secretary, drew the ire of Duterte for a recent column in which she congratulated his administration’s poverty reduction efforts.

Presidential spokesperson Salvador Panelo said it was a surprise that Monsod wrote something favorable about the President, because she “has not said any good word” about him.

“The President asked me to give his response to this columnist. He said: ‘Tell her, I hate being patronized! F*** you!’”

Panelo said the President made the remarks in response to her column on Saturday titled “What the latest poverty data tell us.”

In that column, the University of the Philippines professor emerita and economist hailed the decrease in poverty incidence.

“The Duterte administration must be congratulated,” she said.

“Not since the Ramos administration has the war on poverty been so effectively pursued; it managed to reduce family and population poverty incidence by 8.8 and 8.3 percentage points respectively between 1994 and 1997,” she added.

But she asked the President what his administration was doing to lower rural poverty in its Philippine Development Plan 2017-2022.

“May we know how rural poverty fared? And since poverty is a mostly agricultural/rural phenomenon, as shown among others by the very low poverty incidence in the highly urbanized cities, tell us how the war on poverty has also fared in the agriculture sector. Hopefully then, we can rejoice even more,” Monsod said.

Instead of welcoming the praise, Panelo cast doubt on Monsod’s motives.

He said Monsod “has not said any good word and then suddenly there is praising.”

“There must be some reason. Is she laying a predicate?” Panelo asked.

Monsod has written about the President and his attacks on detained Sen. Leila de Lima as well as the state of his health.

She has also compared Duterte to US President Donald Trump, describing the Philippine leader as “being more intellectually gifted than Trump.”