US visa canceled? Dela Rosa would rather go to China 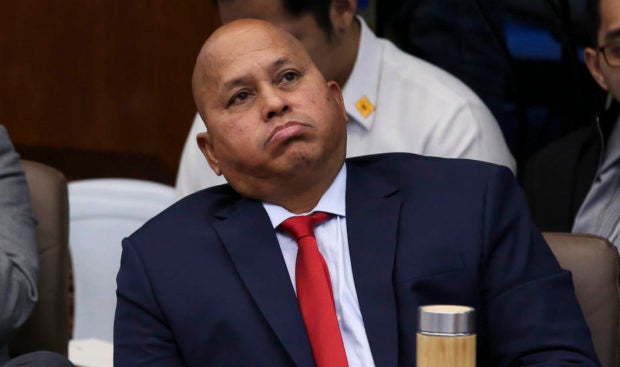 MANILA, Philippines — If Uncle Sam won’t allow him to see the Statue of Liberty, there’s always the Great Wall of China.

Sen. Ronald “Bato” dela Rosa on Monday admitted that he’s disheartened by “rumors” that the US government had canceled his visa over his key role in President Duterte’s brutal crackdown on drugs.

“I have heard rumors about it, but I have not received any official confirmation [from the US Embassy in Manila]. But I’m planning to send them a letter,” he told reporters.

He said some of his friends in the US Embassy had actually informed him that his visa had been canceled, which was why he skipped the July 20 fight of his colleague and friend, boxing superstar Sen. Manny Pacquiao, against American boxer Keith Thurman in Las Vegas, Nevada.

Told about Senate President Vicente Sotto III’s advice that he travel to Europe instead, the junior senator replied: “Why Europe? [I would rather go to] China.”

“I could just walk along the Great Wall. That’s enough to make one happy,” he added.

Dela Rosa, a former police chief in President Duterte’s hometown of Davao City, shot to national prominence when he was named head of the Philippine National Police shortly after Mr. Duterte assumed power in July 2016.

As PNP chief, he became the first enforcer of the President’s bloody war on drugs, which has been blamed for the deaths of more than 5,000 drug suspects in police operations and has drawn international condemnation.

“Granting that is true, they are very biased [and] misinformed. They were misled by their informants,” Dela Rosa said when asked to comment on reports that the “cancellation” of his visa was an offshoot of his role in the crackdown on drugs.

“Even you, in the media, could answer that. Did I encourage the killing of drug suspects? Did I order the killings? Am I involved in covering up the misdeeds of policemen?” he asked.

Would he seek a reconsideration from the US government, if ever?

“If that’s allowed, then maybe,” Dela Rosa said. “But if they don’t want to reconsider, then we cannot do anything about it.”

“Will it be degrading for the Republic of the Philippines if a senator makes an appeal to let him enter America again? If it will, then I may no longer ask for an appeal,” he added.

Dela Rosa said it would be a pity if people weren’t informed beforehand about the cancellation of their US visas.

“What if I already flew to America and was refused entry after already spending for my trip? Anyway, that is just a privilege, not a right. If I’m barred from entering [the United States], I’m still grateful. I have already experienced [staying in] America a couple of times,” he said.