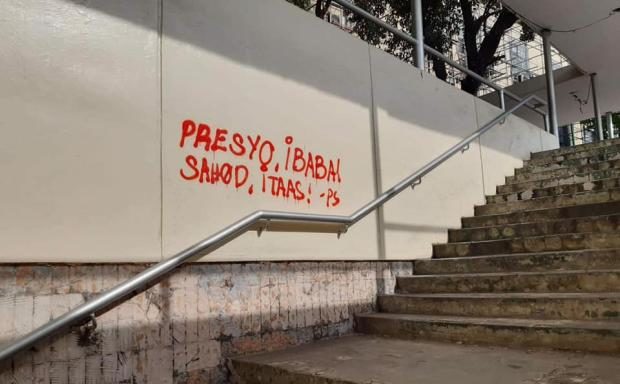 MANILA, Philippines – The militant group Anakbayan demanded the immediate release of Panday Sining (PS) members who were arrested by police for vandalizing streets in Manila.

Anakbayan national spokesperson Alex Danday on Monday said that this was because the arrests were illegal and an “overkill,” as Manila Police District (MPD) officers supposedly conducted the operation in civilian clothes, aside from handcuffing and dragging the PS members.

“We demand the immediate release of these people’s artists. We demand an end to the Duterte regime’s tyranny amid the people’s just demands.  We call on all artists and cultural workers to create and distribute art that exposes genuine social realities and articulates the people’s demands,” Danday said in a statement.

Danday claimed the arrest undermined the freedom of expression of the activists, who gained notoriety for painting leftist declarations and images on newly-painted walls in Manila.

“We condemn the illegal arrest, police violence, and outright vilification against cultural activists.  More than an issue on the trampling of our right to freedom of speech, this is an attack against what these artists are fighting for — the rights and welfare of the Filipino people,” she added.

Anakbayan contradicted the police’s assertions, saying that the PS members were only on their way home from the Bonifacio Day rallies.

The group made headlines early November when they placed their graffiti on the walls of Lagusnilad, an underpass connecting the sides of Padre Burgos Avenue, from the Manila City Hall up to Intramuros.

This earned the ire of Manila Mayor Isko Moreno, who said that the PS members should face the consequences of their actions.

The PS asked for the public and Moreno’s patience, stressing that the need to broadcast issues hounding President Rodrigo Duterte’s administration are more urgent.

“All of these are under the context of Duterte’s crackdown against dissenters,” Danday said.

“The case of Panday Sining Four is not an isolated case — even before today, human rights advocates, union leaders, and peasant leaders, among others, have been illegally abducted, harassed, and killed as they fight for just wages, genuine land reform, accessible social services, and the people’s right to life,” she added.