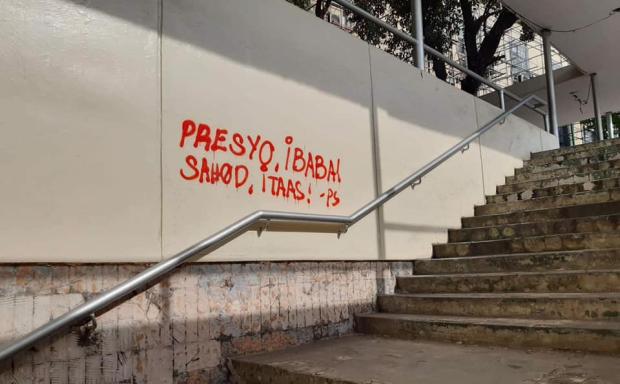 MANILA, Philippines – The youth group that claimed responsibility for writing street graffiti in various areas in Manila justified their action by insisting that pressing issues and problems are more urgent.

In a statement on Tuesday, Panday Sining asked for the public’s patience but explained that the killings, attacks against critics, and continuous poverty should be discussed.

“To the public: sorry for the inconvenience, but the matter and issues at hand are urgent. Left and right, ordinary people are being killed or jailed for criticizing this corrupt and fascist government,” the group said.

“The space for peaceful and democratic speech is already being compromised by the regime as it pushes to criminalize dissent […] Repression is rampant amid worsening poverty, joblessness, and hunger brought about by the Duterte regime’s adherence to foreign, big businesses, and landlord interests,” they added.

The left-leaning youth group recently drew flak from netizens and people in Manila, after the newly-painted Lagusnilad — an underpass which links pedestrians to Intramuros and the Manila City Hall — was vandalized with leftist declarations.

Some of the graffiti, painted in red, called for the lowering of prices of basic goods and the increase of daily salaries. Another post advocated for a war against the supposed “de facto” martial law over the country.

The Manila City’s Tourism and Cultural Affairs Bureau (MTCAB) has expressed their disappointment over the issue, as they have labored towards fixing and beautifying the area.

[Manila Tourism and Cultural Affairs Bureau is saddened by this incident. All of this was put in order and improved as a result of the work of several individuals to bring back the beauty and energy of Manila.]

PS signified their intention to talk with Manila Mayor Isko Moreno about the issue.

“We understand and recognize the sentiments of the public, but it is also high time that we talk about the worsening attacks to our democratic rights. The purpose of our protest art isn’t to spite the citizens of Manila but to sound the alarm of the public against these injustices,” the group said.

“We are very much willing to talk with Mayor Isko Moreno about the matter as he shares the same sentiment about wanting just and lasting peace,” they added. We call on all artists to speak out and utilize our art as a means to expose the injustices under Duterte and to fight for our democratic rights.”