Robredo relieved that Palace is open to scrapping Tokhang 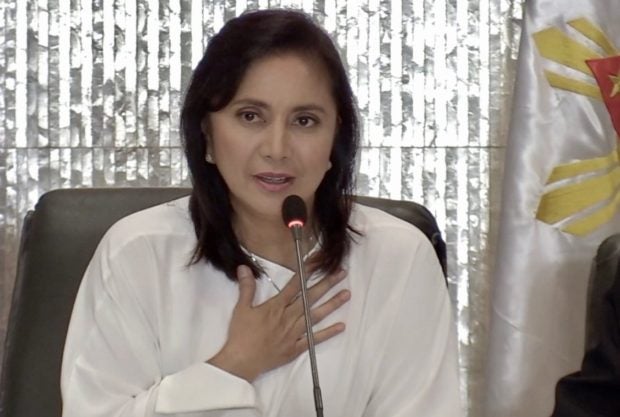 Vice President Leni Robredo speaks during her first meeting with members of the Inter-Agency Committee on Anti-Illegal Drugs (ICAD) on Friday, Nov. 08, 2019, at the Office of the Vice President in Quezon City. Robredo, as newly-appointed co-chair of ICAD, presided over the meeting. (Photo by Noy Morcoso / INQUIRER.net)

Robredo revealed this on Tuesday, a day after presidential spokesperson Salvador Panelo said that she could get rid of Tokhang and reiterating that she would be given free rein as the co-chairperson of the Inter-Agency Committee on Anti-Illegal Drugs (ICAD).

“If they would not give me the momentum to move forward, why am I still here? That’s why for me, it is a big relief that Secretary Panelo said it publicly,” Robredo, speaking in Filipino, told reporters on the sidelines of a forum on women empowerment held at the Marriot Hotel in Pasay City.

“If you remember, during the first meeting of ICAD, I already told the members that it [scrapping Tokhang] is one of my policy directions,” she added.

Two days after accepting the offer from President Rodrigo Duterte to lead the government’s campaign against illegal drugs, Robredo called ICAD member-agencies for a meeting to reveal her plans.

Tokhang is the brainchild of then PNP chief Ronald dela Rosa, who is now a senator. It literally means “to knock and plead” — from the Cebuano words “toktok” and “hangyo,” respectively.

In the process of Oplan Tokhang, officers would knock on the doors of suspected drug users and ask them to surrender or refrain from getting involved in the drug trade.

However, Robredo noted that the campaign has gained notoriety, so much so that killings due to the anti-drug war had come to be associated with Tokhang.

Since Duterte assumed office on June 30, 2016, over 5,500 drug personalities have died in legitimate operations, according to police records. Critics said, however, that the number could be well higher — somewhere between 11,000 to 30,000.

Last Friday, Robredo said: “I think it is incumbent upon us to change that thinking. Maybe it’s time that we think about changing the anti-drug campaign into one that is effective but without anyone being killed senselessly.”

But even with Malacañang’s supposed conditional approval, several personalities have already insisted that scrapping Tokhang is not the way to go forward in the drug war.

Robredo’s co-chair, Director General Aaron Aquino of the Philippine Drug Enforcement Agency (PDEA) himself, disagreed with her after the ICAD meeting last Friday.

Dela Rosa also said that there is nothing wrong with the program.

“So what’s wrong with Oplan Tokhang? Maybe they could not just accept this Oplan because it really destroyed the operations of drug personalities,” he added.