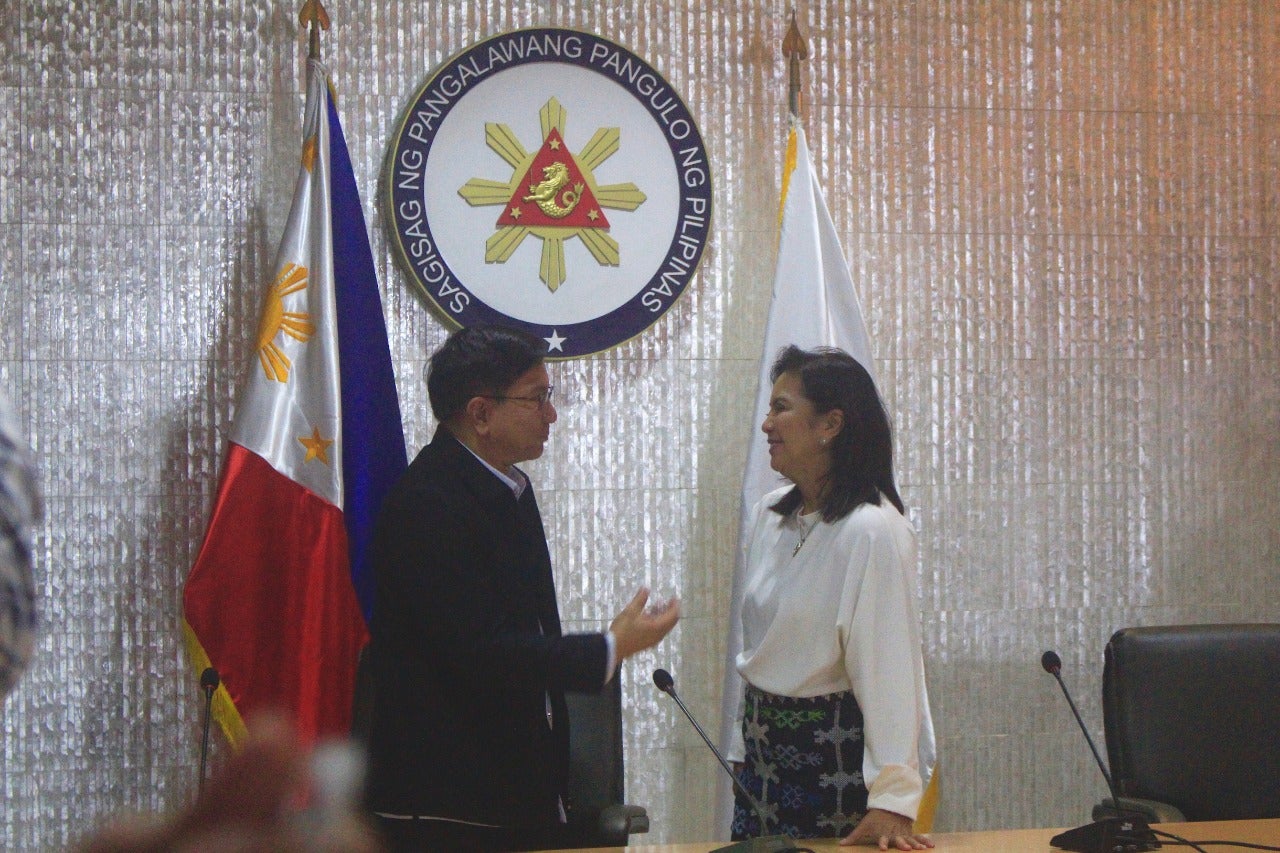 Vice President Leni Robredo talks to PDEA Director General Aaron Aquino after the first meeting of the Inter-Agency Committee on Anti-Illegal Drugs (ICAD) since Robredo was appointed by President Rodrigo Duterte as co-chairperson — a post that she will share with Aquino. (Photo by Gabriel Pabico Lalu/ INQUIRER.net)

MANILA, Philippines—A proposal that Vice President Leni Robredo made to scrap a controversial component of President Rodrigo Duterte’s war on drugs has not been discussed in the multi-agency anti-narcotics body that Robredo co-chairs, according to the Vice President on Friday, Nov. 8.

Robredo said her idea to scrap Oplan Tokhang (Knock and Plead) has not been taken up at a meeting of the Inter-Agency Committee on Anti-Illegal Drugs (ICAD) on Friday.

She said, however, that she would raise the concern in smaller meetings of ICAD’s clusters.

“It was really a listening exercise for me,” said Robredo, who had accepted the appointment as co-chair of ICAD after doubting the seriousness or sincerity of the offer made by President Rodrigo Duterte.

She said after her first ICAD meeting, she “will be having small group meetings with either the clusters or the different agencies.”

She said she asked other officials in ICAD to give her time to raise the issues she wanted to. “But I was emphatic from the opening until the closing that the killings diminish all the hard work that all the agencies are putting into this,” she added.

In a statement before the ICAD meeting, Robredo said Oplan Tokhang, a creation of ex-Philippine National Police chief now Sen. Ronald “Bato” Dela Rosa, should be scrapped because it had earned ill repute and connoted a “war against the poor.”

Tokhang is a component of the PNP’s Oplan Double Barrel which was supposed to be nonviolent and involved only knocking at doors of suspects’ homes and pleading to them to cease involvement in drugs.

But Tokhang had gained notoriety when it was associated with hundreds of killings of drug suspects mostly from impoverished areas of Metro Manila.

According to Robredo, as a result of “many senseless killings that accompanied Operation Tokhang,” it has “reached a certain level of notoriety that when you say Tokhang, it meant a war against the poor.”

“Maybe it’s time for us to think about replacing it with another campaign that would be more effective so no one would die senselessly,” she said.

But Philippine Drug Enforcement Agency (PDEA) Director General Aaron Aquino, who co-chairs ICAD with Robredo, was firm in his belief that Tokhang should stay.

He acknowledged, though, that there might be a need to improve anti-drug operations of the PNP.

If the PDEA stand would be sought, he said he thinks there’s no need to scrap Oplan Tokhang. “In fact, when you define Tokhang, it’s just encouraging drug personalities to surrender,” said Aquino.

“But the meaning is being distorted,” he said in Filipino. “In fact, it’s a good oplan,” he added.

“What might just be needed is a reassessment in the PNP about how to fix or improve their operations,” Aquino said. “I think that’s all,” he added.

Robredo has been vocal against the hundreds of killings in the campaign against drugs, saying it had been one of the factors that drove her to accept the position of ICAD co-chair.

In announcing her acceptance of the post, Robredo said having a key role in the anti-drug campaign might be her chance to stop the killings even if her allies warned her that she was just being set up to fail./TSB