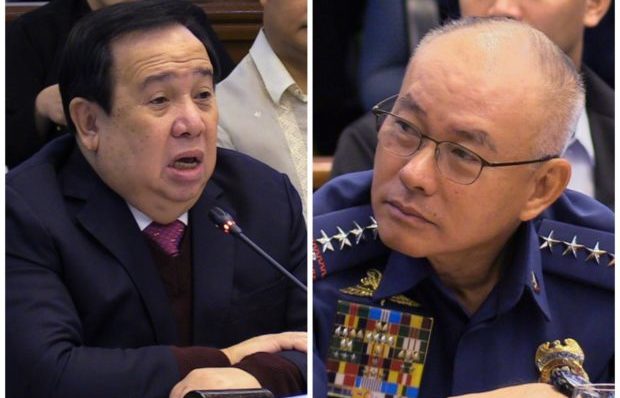 Gordon, who chairs the Senate blue ribbon, and justice and human rights committees, said that the PNP-CIDG addressed the issue “based on the evidence” following the hearings conducted on the case of the controversial 2013 anti-illegal drugs operation in Mexico, Pampanga.

“They cannot drop the ball again on this one. The very big fish is on the line. Ang laki-laki ng isdang nahuli!” Gordon said in a statement.

[It was a very big fish that was caught.]

On Monday, the PNP-CIDG prodded the Department of Justice (DOJ) to file a case against Albayalde and the 13 police officers involved in the said buy-bust operation, saying: “The Senate Blue Ribbon proceedings and the witnesses presented therein under oath are competent enough to establish probable cause against the respondents.”

During the operation, which was led by Maj. Rodney Baloyo IV, some 38 kilograms of crystal meth, or shabu, and a “substantial” amount of cash were supposedly seized, but a separate probe found that the seized shabu amounted to 200 kilograms.

Albayalde was the Pampanga police chief when the operation was conducted.

“More than the work is the fact that the case was clearly proven. The testimonial evidence of eight generals who cooperated in implicating Albayalde and the fact that he never tried to defend himself truly indicate that he is involved in the so-called buy-bust operation,” Gordon said.

“He really knew what happened and supporting Major Rodney Baloyo IV’s testimonies clearly shows that there is a cover-up in the PNP,” the senator added.

Gordon noted that, during the course of the Senate probe on the case, “eight generals testified against one of their own,” adding that “this is the first time that a high-ranking military official was unseated from his position because of the investigations of the Senate.”

“The people need to know that they can rely on their policemen. That is why it is very crucial for the PNP to cleanse its force so that the public’s trust will be regained,” Gordon said.

Read Next
US held record number of migrant kids in custody in 2019
EDITORS' PICK
PH preps for China virus: Question of when, not if
Beyond water service: Maynilad builds massive infrastructure projects to clean up Metro Manila waterways
Museums ‘put to sleep,’ churches closed amid volcano’s unrest
Seventh judge assigned to handle De Lima case
SM continues to send relief assistance to remote towns in Batangas
Get exciting deals and discounts when you download the new McDonald’s App
MOST READ
Taal Volcano flexes signs of restiveness anew
Passengers from Wuhan, China to be flown out of Kalibo, Aklan – CAAP
Lacson on Duterte’s threat to end VFA over Bato’s canceled visa: Where is the connection?
Part of Aurora Boulevard in Cubao closed from Jan. 25 – Feb. 1
Don't miss out on the latest news and information.