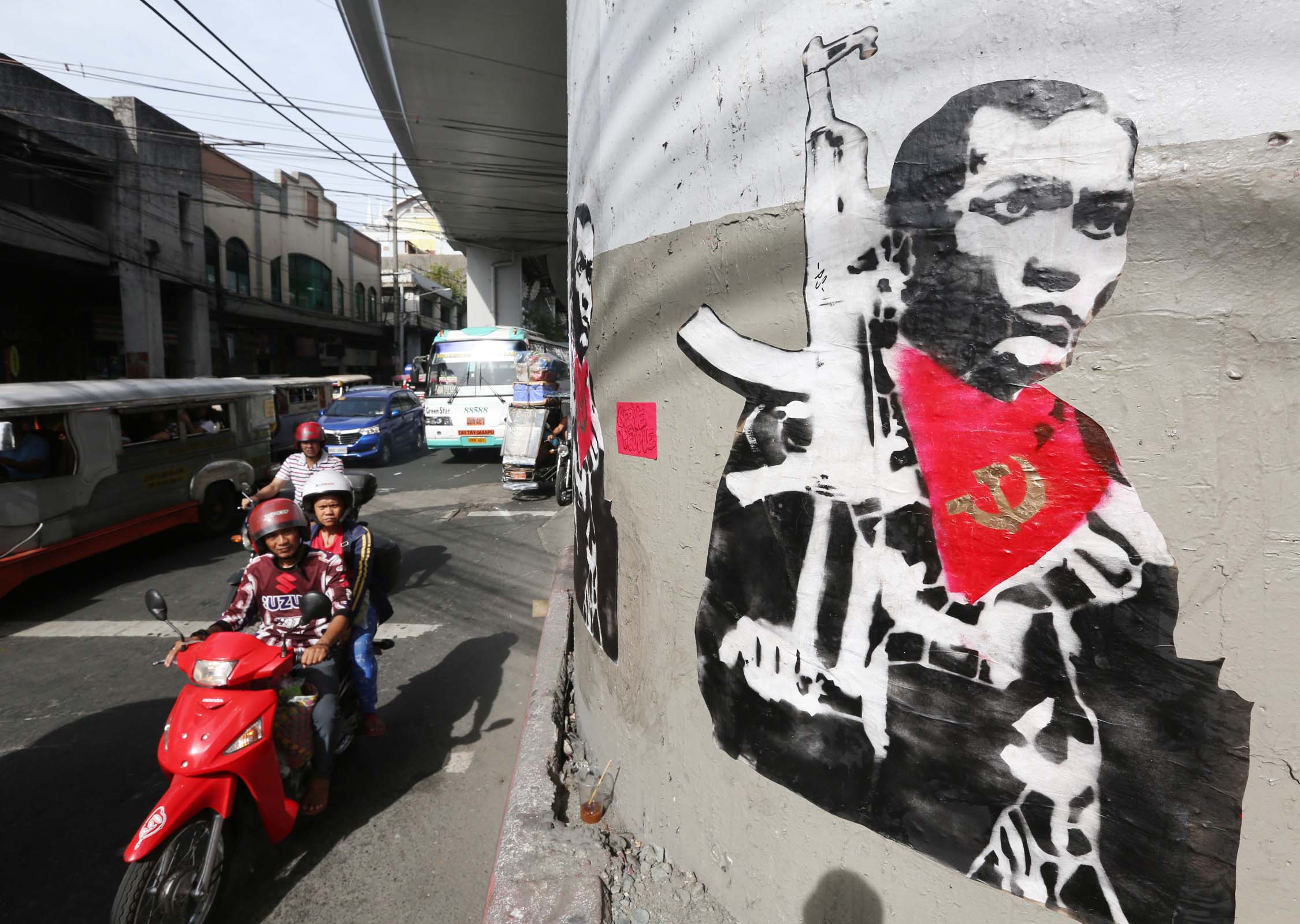 ART OR GRAFFITI? A post of the LRT Line 2 on Recto Avenue in Manila is the latest “canvas” of Panday Sining. —MARIANNE BERMUDEZ

MANILA, Philippines — Four members of the artists’ group Panday Sining, earlier branded by the Manila City government as vandals, were arrested by the police on Saturday afternoon while attending rallies commemorating Bonifacio Day.

The four, which included a minor, detained by the Manila Police District (MPD) for vandalism and allegedly “interfering in police duties” on Saturday afternoon.

According to police, the suspects, members of Panday Sining, were apprehended by the MPD’s District Intelligence Division while they were spray-painting messages calling for an end to political repression against activists on Light Rail Transit (LRT) posts at Recto.

Police added that while they were about to arrest the four, they “deliberately interfered in the police operation” and resisted arrest by pushing the arresting officer.

Three of the suspects were identified as Jeanne Vaughn Quijano, 24; Joven Laura, 24; and Mikhail Collado, 18.

In a statement, Panday Sining condemned the MPD’s “arbitrary abduction and arrest” of its members, saying that they were manhandled and beaten while being dragged out of a jeepney by officers in plainclothes.

“We demand the release of these people’s artists. We demand an end to the Duterte regime’s tyranny amid the people’s just demands,” the group said.

Among the messages scrawled on the posts near LRT 2 Recto Station were “Biguin ang de facto martial law” and “Anong sagot ng supremo sa martial law?” which the group said referred to President Duterte’s Executive Order No. 70 in 2018.

The EO institutionalized the “whole-of-nation” approach in attaining “inclusive and sustainable peace” through the creation of a national task force to “end all communist armed conflict.”

Panday Sining also defended its members, saying that protest art was not only just but necessary in the time of “narrowing space for free and critical thinking.”

Manila Mayor Francisco “Isko Moreno” Domagoso in a statement on Sunday said that he had warned the group against continuing their vandalism.

“I have already called on you not to do it again, but you still did it. Now you have to face the consequences of violating the law,” he said.

Last month, Domagoso fumed over Panday Sining’s spray-painted messages on the walls of UN Avenue and the Lagusnilad underpass, dismissing the act as vandalism and not art.

The group said the “vandalism” was part of a then ongoing “Graffiesta,” but later apologized after City Hall employees and students painted over the messages.

Panday Sining said, however, that they would continue in their struggle against the Duterte administration’s despotic regime and the continuing attacks against activists.

“Panday Sining will not cower and stop in its mission to create art that arouses, organizes and mobilizes the masses,” they said.