Woman cop captures wanted criminal after proposing marriage to him 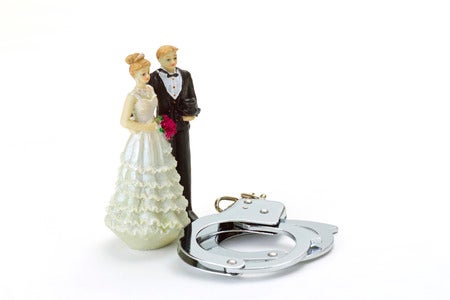 A wanted fugitive ended up in handcuffs on what was supposed to be one of his happiest days, after an undercover cop proposed to him and arrested him during their engagement ceremony in Madhya Pradesh, India.

Balkishan Chaubey, a man with 16 criminal cases including murder, was finally caught after being on the run for a year, as per Orissa Post last Saturday, Nov. 30. Chaubey had a cash reward of 10,000 rupees (around P7,000) on his head.

The authorities were made aware that the suspect was in search of a bride, which lead to the entrapment operation. A woman officer was tasked to contact the fugitive via mobile phone.

“Police arranged a SIM card of New Delhi circle in the name of a woman laborer from Bundelkhand, who is presently living in New Delhi,” police superintended, Tilak Singh said in the report.

The officer then called Chaubey, telling him she dialed the wrong number. Chaubey reportedly checked the credentials of the number and soon the two were talking to each other. After a week, the woman officer proposed to the suspect.

Chaubey decided to meet his bride-to-be in a temple at the Bijouri village in the state of Madhya Pradesh, as per report, for their Roka ceremony. It is a pre-wedding ritual in Indian weddings. He was arrested last Thursday, Nov. 28.

“The woman sub-inspector reached there with other police personnel in civil dress,” Singh was quoted as saying. “When Chaubey reached the temple, police arrested him.”

Chaubey was immediately presented to the court on Friday, Nov. 29. He was later sent to jail after the court rejected his plea for bail. Cha Lino/JB

Read Next
Cats to be put on leashes to protect wildlife? EU says No
EDITORS' PICK
Taal Volcano and surroundings have become ‘inflated’
James Reid, Nadine Lustre confirm split
What exactly did Vilma Bautista — Imelda’s ex-aide — do?
China’s Xi says coronavirus outbreak must be taken seriously
‘A greener, cleaner tomorrow’: A how-to guide for Filipinos who want to help with today’s energy crisis
San Mig Light celebrates its 20 years in Poblacion
MOST READ
If Marcos runs in 2022 polls, he must accept results – Robredo
Taal Volcano and surroundings have become ‘inflated’
Ayala Land bares facts on Technohub deal: P4B in lease to UP
History books should highlight Marcos regime atrocities – Robredo
Don't miss out on the latest news and information.