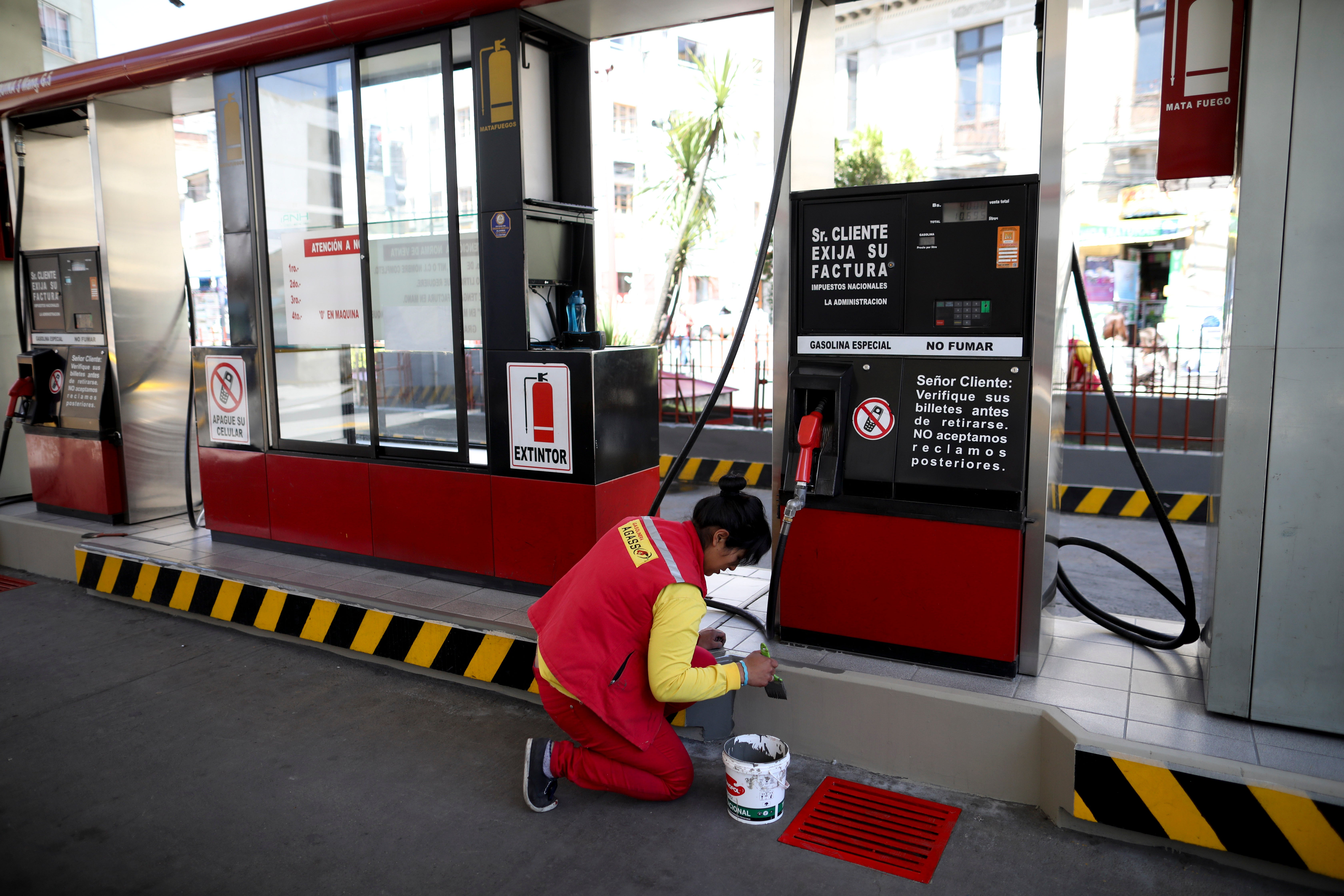 A woman paints a closed gas station in La Paz, Bolivia, Monday, Nov. 18, 2019. The blockades of former president Evo Morales’ supporters on the outskirts of the main cities of Bolivia are causing a shortage of gasoline and food, which puts pressure on the interim government that seeks to open a dialogue to end four weeks of social and political upheaval. (AP Photo/Natacha Pisarenko)

LA PAZ, Bolivia  — Residents in several Bolivian cities are reporting food and gasoline shortages because of protests by supporters of President Evo Morales, who resigned and fled to Mexico after a disputed election and nationwide unrest.

Bolivia’s interim government said Monday that its efforts to resupply La Paz faced challenges because demonstrators cut off some transport routes. The new leadership is also struggling to open dialogue with opponents, particularly after the shooting deaths of nine pro-Morales coca growers during a confrontation with security forces Friday.

Furious over the shootings, backers of Morales demanded the resignation of Jeanine Áñez, Bolivia’s self-proclaimed interim president. She was a Senate vice president thrust into prominence after the resignations of senior leaders in Morales’ administration.

Bolivian church leaders announced plans to begin talks Monday involving U.N. envoy Jean Arnault. They appealed for the participation of Morales’ Movement Toward Socialism party and said topics would include new elections and calls for a new election panel. Former President Carlos Mesa, who finished second to Morales in the disputed Oct.20 election, said he would participate.

The new hydrocarbons minister, Víctor Hugo Zamora, told Bolivia’s ATB television that a gasoline supply convoy was having difficulty reaching the city because of roadblocks and ditches dug by protesters.

Many shops in La Paz were closed and the few that opened were charging double the normal price, resident Guillermina Chura said.

“What are we going to give to our families if things continue this way?” Chura said.

Vendor Ana Gonzáles said she had packed up her vegetable stand in the street because she had nothing to sell.

“What am I going to live from?” Gonzáles said.

She also said Morales should take steps to calm the situation. So far, Morales has remained defiant, condemning the interim government and saying he was ousted in a coup.

Blockades around the major city of Santa Cruz have also disrupted commerce. Producers said fruit and vegetables were rotting on trucks been unable to reach markets.

Bolivia’s pro-Morales faction has set up the blockades as part of a concerted effort to destabilize the interim government, said Alberto Bonadona, an economic analyst and professor at the Higher University of San Andrés.

A total of at least 23 people have been killed in violence that erupted after the presidential election last month, according to the public defender’s office.

Morales, Bolivia’s first indigenous president, claimed victory after the vote, but opponents alleged fraud and mass protests erupted. An international audit concluded there were election irregularities, and Morales resigned Nov. 10 after losing the support of the security forces. He went to Mexico, which gave him asylum.

On Monday, thousands of Morales supporters demonstrated in the Argentine capital of Buenos Aires, partly blocking a main thoroughfare as they denounced a “coup d’état” and demanded that the leader be returned to power.

Buenos Aires has a large Bolivian community, and many attended the protest bearing their country’s national flag as well as the wiphala, which represents some indigenous people. Union workers and other left-wing groups also participated.

Bolivia’s crisis has exposed racial, ethnic and geographic divides that some thought had been largely overcome during the nearly 14 years of Morales’ administration as well as the introduction of a more inclusive constitution.

Analysts say the movement to remove Morales was an urban middle-class revolt against the former president’s efforts to hang onto power.

But since his departure, racist discourses and regional rivalries have re-emerged in a nation divided between a wealthier, more European-descended lowland east and a more indigenous, poorer, highland west.