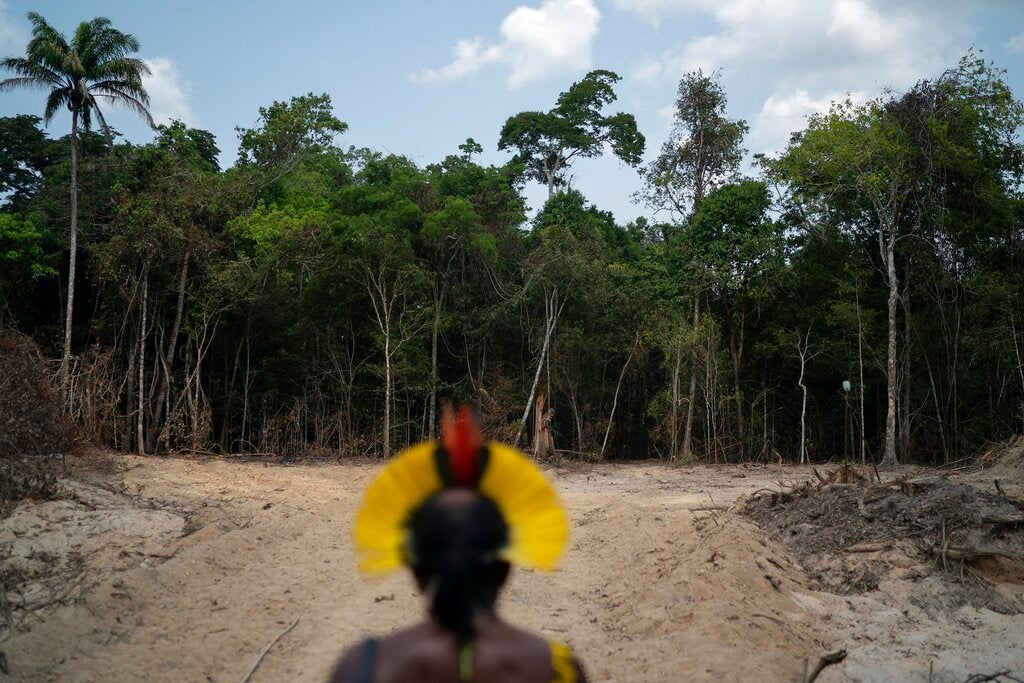 Krimej indigenous Chief Kadjyre Kayapo, of the Kayapo indigenous community, looks out at a path created by loggers on the border between the Biological Reserve Serra do Cachimbo, front, and Menkragnotire indigenous lands, in Altamira, Para state, Brazil.  (AP File Photo)

RIO DE JANEIRO  — Deforestation in Brazil’s Amazon rainforest is at its worst in more than a decade, a government report said Monday, undermining officials’ claims that concerns by environmentalists have been overblown.

The area of deforestation is the largest recorded since 2008 and is about the size of the U.S. states of Delaware and Rhode Island combined.

Concern about the Amazon heightened after President Jair Bolsonaro took office in January. His administration has advocated the loosening of protections around natural reserves and indigenous lands as a way to promote economic development.

Environmentalists and nonprofit groups have accused the government of trying to weaken environmental legislation, warning that deforestation would likely worsen as a result.

The Bolsonaro administration has spent a lot of energy attacking data on deforestation.

In August, the head of the space research institute, Ricardo Galvão, was fired shortly after Bolsonaro accused his agency of manipulating deforestation data to make the government look bad. The president later suggested, without citing evidence, that non-governmental groups could be setting some of the fires in the Amazon to draw attention to his administration.

The annual data published by the space research agency Monday confirms the institute’s earlier reports that deforestation was on the rise. The latest data is actually 42% higher than what was previously reported.

“It is unacceptable that the Amazon is still being destroyed,” the WWF conservation group said in a statement. It said deforestation will accelerate unless the Brazilian government takes robust action to prevent it.

In July and August, fires in the Amazon region spread at a pace unseen since 2010, before slowing in September. Farmers, developers and others often use fire to clear deforested land for soy production or pastures.

Some European leaders have questioned Brazil’s commitment to tackling deforestation and argued that the fires in the Amazon required a global response because of the ecosystem’s critical role in draining heat-trapping carbon dioxide from the atmosphere.

The Brazilian government has denied any wrongdoing and says it is taking all the steps needed to protect the Amazon, accusing France and Germany of infringing on its sovereignty.

As fires raged a few months ago, Bolsonaro sent the military to help battle some blazes and banned most legal fires for land-clearing in the Amazon for two months. Fires in the Amazon eventually fell below the monthly average in September.

According to Monday’s report, the Brazilian state of Para accounted for nearly 40% of all deforestation during the 2018-19 period, but illegal logging increased markedly in the states of Roraima and Amazonas, officials said.

The report is preliminary, and its data will be confirmed next year.