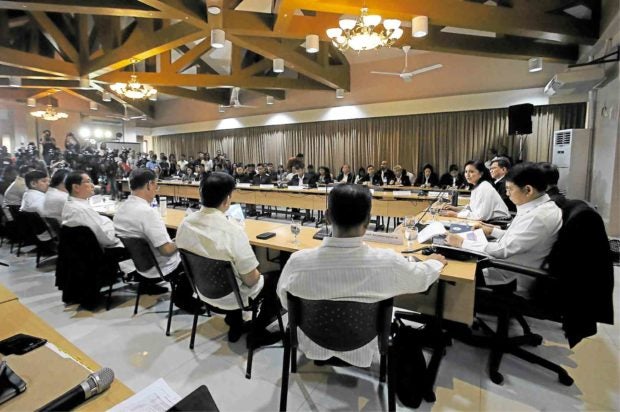 FIRST MEETING Vice President Leni Robredo on Friday presides over her first meeting with members of the Inter-Agency Committee on Anti-illegal Drugs, which she cochairs after her appointment to the position by President Duterte. —LYN RILLON

Despite her strong criticism of President Duterte’s war on drugs that she said had targeted only the poor, Vice President Leni Robredo on Friday said the country must by itself try to solve problems in the administration’s antinarcotics campaign, including allegations of human rights violations, before inviting international investigators to look into it.

As the nominal leader of the opposition, her statement could blunt efforts by critics of Mr. Duterte, including some leaders of the Catholic Church and foreign experts, to open the country’s doors to international probers, particularly from the various UN human rights bodies as the number of drug suspects being killed rises in the thousands.

Speaking at a press conference after her first meeting with members of the Inter-Agency Committee on Anti-Illegal Drugs (Icad) to which she was appointed by the President as cochair, Robredo said she felt that the country’s antidrug problems “should first be solved internally.”

But she quickly added: “If I believe that the government is not doing anything to punish whoever needs to be punished, then I won’t have any problems with inviting them over.”

“I’ve always said that if there’s nothing to hide, then what are we fearful for?” she said.

Robredo said she reiterated to members of Icad her strong opposition to “senseless killings” in the drug war but also made recommendations like the inclusion of “advocates.”

“[I want] civil society organizations to be given a platform to participate,” Robredo said, adding that she was happy that there was no opposition to her suggestion.

On Thursday, she said that she would suggest to the committee that private sector groups be invited to look into the antidrug campaign.

In July, the UN Human Rights Council (UNHRC) voted to adopt a resolution initiated by Iceland calling for a “comprehensive” international report on human rights in the Philippines, and asking the Duterte administration to cooperate with UN investigators.

The Duterte administration sharply criticized the move and said it would not allow UNHRC probers into the country.

Philippine Drug Enforcement Agency (PDEA) head Aaron Aquino, a former police general who is the other chair of Icad, invited Robredo to join one of their antidrug operations, including the planning stage, so she would “get a feel” of what law enforcers deal with and point out any lapses or defects that she may observe.

“I would also be there with you,” Aquino told Robredo at the press conference.

“Thank you very much, sir,” she replied. “I would like that very much.” 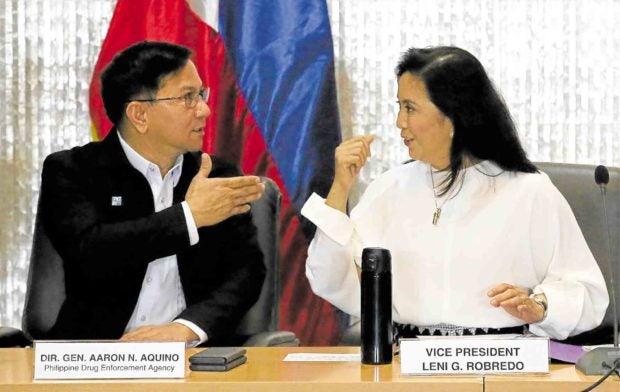 GETTING HER UP TO SPEED Philippine Drug Enforcement Agency chief Aaron Aquino and Vice President Leni Robredo preside over the Interagency Committee on Anti-Illegal Drugs meeting she called on Friday. —LYN RILLON

Her first meeting with Icad was meant to get her up to speed with the antinarcotics drive, but Robredo said one thing she immediately noticed was that government statistics did not jibe with each other.

“All we have are estimates. According to the Dangerous Drugs Board (DDB), there are 1.8 million drug dependents. But today the agencies explained that the terrain has changed and that the situation has changed,” Robredo said.

“We need more data so it is not all estimates,” Robredo said. “There was a need to reassess, based on numbers given to us, it appears that the numbers are not clear either.”

She said drug addiction was a real problem, noting Mr. Duterte’s own frustrations about what he says are up to 8 million drug-dependent Filipinos. The President has not disclosed the source of his numbers.

Robredo said she interpreted Mr. Duterte’s offer for her to serve as the government’s “drug czar” as a sign of his openness to new ideas.

Presidential spokesperson Salvador Panelo said Robredo should not be prejudged and given a chance to perform her new role in the Duterte administration.

“She will be just like walking on a high wire, she either makes it or breaks it. But we wish her well; we will give her all the support that she needs,” Panelo said in a recent radio interview.

Albay Rep. Edcel Lagman, an opposition member, said if the administration truly wanted the Vice President to succeed, she should be given adequate funds.

He suggested getting funds from the 2020 appropriations for the Philippine National Police or from the proposed P4.5-billion intelligence and confidential funds for the Office of the President, “which purportedly include covert operations on the violent drug war.”

All the help she needs

“Now, the ball is in the administration’s court,” she added. “As (Robredo) accepted the role offered to her, the President and his underlings need to fall in line and give [her] all the help that she needs to succeed.”

She asked whether PDEA, the PNP, Department of Justice and even Congress would give her all the information she needed, prosecute cases against the “true drug lords” and give her budget support.

“If the answer to any of these is ‘no,’ then Duterte’s failure in the campaign against illegal drugs is all but sealed,” De Lima said. —WITH REPORTS FROM JULIE M. AURELIO, MARLON RAMOS, DJ YAP AND THE WIRES