Stay or go? US residents of Mexico town torn after 9 killed 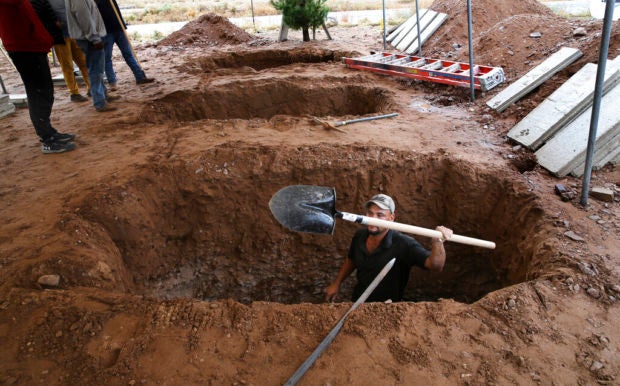 Men dig graves for Rhonita Miller, 30, and four of her young children Krystal and Howard, and twins Titus and Tiana, who were murdered by drug cartel gunmen, before their burial at a cemetery in LeBaron, Chihuahua state, Mexico, Frida. (AP)

LA MORA, Mexico — U.S. citizens living in a small Mexican farming community established by their Mormon ancestors are trying to decide whether they should stay or leave after burying some of the nine American women and children slaughtered this week in a drug cartel ambush.

What had been a peaceful existence in a fertile valley ringed by rugged mountains and desert scrub about 70 miles (112 kilometers) from the border with Arizona became increasingly dangerous in recent years as the cartels exerted their power and battled each other in Sonora state, a drug smuggling hotbed.

But La Mora, a hamlet of about 300 people where residents raise cattle and cultivate pomegranates, “will be forever changed” following the killings Monday as the women traveled with their children to visit relatives, a tearful David Langford told mourners at the funeral for his wife, Dawna Ray Langford, and their 11-year-old and 2-year-old sons.

“One of the dearest things to our lives is the safety of our family,” said Langford. “And I won’t feel safe. I haven’t for a few years here.”

On Friday, the bodies of Rhonita Miller and four of her children were being taken in a convoy of pickup trucks and SUVS, on the same dirt-and-rock mountainous road where they were killed, for burial in the community of Colonia Le Baron in Chihuahua state. Many residents of the two communities that lie a five-hour, bone-jarring drive apart are related. They consider themselves Mormon but are not affiliated with The Church of Jesus Christ of Latter-Day Saints and many have dual U.S.-Mexican citizenship.

Colonia LeBaron has been largely peaceful since the 2009 killing of one of its members who was an anti-crime activist prompted Mexican authorities to establish a security base. But the police presence in La Mora was negligible until the women and children were killed and authorities sent a swarm of state and federal police to the area. How long they stay could be crucial to the community’s future, residents said.

“The truth is we aren’t safe here as a community,” Langford said. “We live in the mountains, we have no access to authorities, or very, very little.”

Former La Mora Mayor Steven Langford predicted that as many as half of the community’s the residents could leave, turning it into a “ghost town.” The motive in the killings still isn’t known, though Mexican authorities have suggested the victims were in the wrong place at the wrong time as competing cartels fought over turf and may have mistaken the SUVs the women and children were in for rivals who travel in similar vehicles.

As he barbequed beef and chicken to feed hundreds of mourners arriving from the U.S. and other parts of Mexico for the funerals, Erasmo Valenzuela said he heard that two or three families plan to leave La Mora. Valenzuela, 50, has worked for the community’s families for 10 years and predicted a permanent military presence could be established in the area.

“Sometimes bad things have to happen for good things to happen, so that we feel safer,” he said.

Residents of La Mora dispute the theory that the victims were not targeted, saying eight children who survived the massacre saw one mother get out of her SUV and raise her hands only to be gunned down anyway. That mother’s checkbook was discovered about 10 yards (meters) away from the burned vehicle, suggesting someone rifled it before setting it ablaze, said Julián LeBarón, whose brother Benjamin was killed 10 years ago in Colonia Le Baron

Until answers emerge as to why the women and children were killed, Joe Darger said his daughter who lives in Utah but maintains a second home in La Mora won’t be spending time again in a place that had been part of her family’s life.

“Until there’s answers, she’s not bringing her kids,” Darger, of Salt Lake City, said after traveling to La Mora for the funerals.

Before her body was taken in a simple wooden casket made by community members to Colonia Le Baron, Rhonita Miller was eulogized by mourners as a mother with “an innocent spirit” and “beautiful heart” whose laugh could light up a room.

They remembered her son Howard Jr., 12, as being proud of recently making his first three-point basketball shot. Miller’s daughter Kristal, 10, was praised as the “the apple of her daddy’s eye. And her twins Titus and Tiana, born last March, were called “two perfect angels in the first precious moments of their lives.”

In a place where families felt safe enough to allow their kids to play outside, the biggest concern for residents is finding out why the women and children were massacred — and that answer will help them decide whether to stay or leave.

“I just think the innocence is gone,” Darger said. “And so unless people feel safe, they’re going to look for other places they can feel safe.”

He added: “It’s a matter of ‘What do we do going forward?’ That’s the question.”