Nearly two years after Supertyphoon “Yolanda” (international name: Haiyan) slammed into Tacloban City in November 2013, Arthur Golong was no longer afraid of storms. But she had become fearful of her own mind.

The gay hairdresser is not sure how it started, but in February 2015, she noticed certain signs. She was picking up little things from the ground, like crawling ants. She was having chills at night, when she could hardly sleep because of an uncontrollable urge to pee. Then there were days when she couldn’t stop walking, even with no destination in mind.

Lab tests all came back normal. But during research on her symptoms on the internet, she was finally able to name what she was experiencing: anxiety and posttraumatic stress disorder.

“At that time, I was already telling my siblings: When I become crazy, just kill me,” she recalls, six years after Yolanda struck. “I don’t want them to know that Arthur, their community leader, had gone insane.”

For Golong, it was the terrifying memories from surviving Yolanda, one of the world’s most powerful typhoons, that triggered her behavioral change. Despite the psychological services given to survivors, the 43-year-old is among the hundreds, if not thousands, who had not received adequate mental health care immediately and years after the storm. (See related stories on Page A8)

She busied herself with work in their community, but in time she realized that her fear and trauma had been brewing in her head like another storm on the horizon. 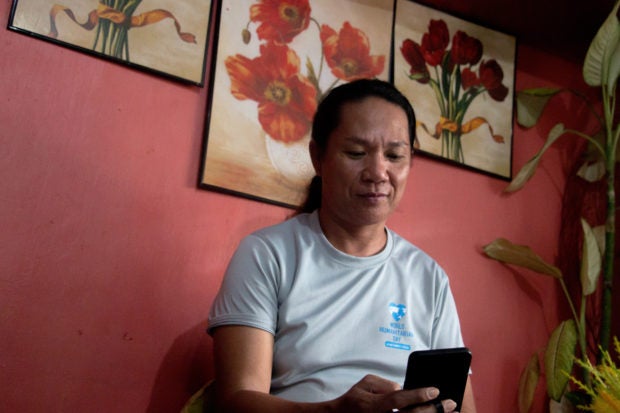 TERRIFYING THOUGHTS. With the help of the internet and a team of psychologists, Arthur Golong
was able to address the strange behaviors that she began to exhibit two years after she had
survived Supertyphoon “Yolanda” (international name: Haiyan). She never thought that her
experience would have a profound impact on her mental health. PHOTO BY DEMIE DANGLA/
CONTRIBUTOR

Worsening extreme weather and severe slow-onset disasters linked to climate change are expected to affect public health in profound ways. But while its impacts on physical health are clear, such as the rising cases of dengue fever in relation to warming temperatures, its equally profound effect on mental health is yet to be fully discussed.

Psychiatrist June Pagaduan Lopez says that for many Filipinos, mental health is often merely equated with those who have no mental disorder or who do not pose a danger to society.

“But when you speak of mental health, it’s well-being of the mind,” Lopez says. “It’s being able to cope with the adversities of life; [it’s having] that strength, the resilience, to deal with these challenges in the most appropriate, productive and creative way.”

Due to this reality, it remains “very difficult for people to understand that mental health is in the core of surviving all our challenges related to climate change,” she says.

Medical doctor Glenn Roy Paraso, a member of the National Panel of Technical Experts of the Climate Change Commission (CCC), says the effect of climate change on mental health may be indirect, thus harder to measure. For example, a strong storm can cause the loss of lives, which can be easily counted. But the effect of losing loved ones on survivors or the changing weather patterns on the mental well-being of farmers and fishers and their livelihood and economic and food security is much harder to measure.

These indirect impacts have longer and lasting effects that can go beyond a single event, Paraso says.

While acute stress is a common reaction to adverse weather events, it may develop into chronic psychological concerns if left untreated. Some disorders may also crop up years after the disaster, as in Golong’s case.

“We had stress debriefings after Yolanda, but when you return to your home—if you still have one—you won’t even remember what you did [in those sessions],” Golong says. “You will just see how poor your conditions are. You will be left to wonder what will happen to you in the future.”

Fortunately in her case, a team of psychologists had been visiting their community when her symptoms emerged. Golong says she was unsure what her fate would have been if she hadn’t received their help. 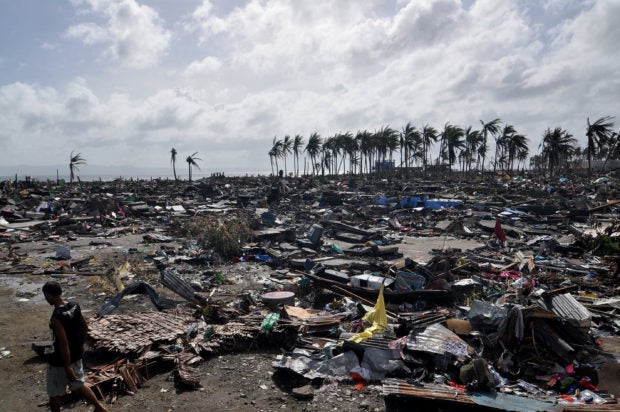 FLATTENED AND DEVASTATED. Eastern Visayas took the brunt of Yolanda in November 2013,
wiping out communities and taking lives in just a few hours. FILE PHOTO FROM PHILIPPINE
DAILY INQUIRER 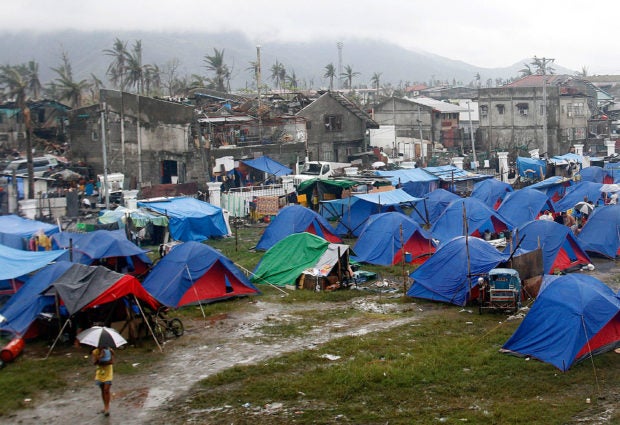 TENT CITIES. Survivors were forced to live in makeshift tents after Yolanda laid waste to their
towns and villages. The staggering death toll and the poor conditions of the survivors were seen
to impact their mental health and psychological well-being. FILE PHOTO FROM PHILIPPINE DAILY
INQUIRER

Greenpeace Southeast Asia executive director Yeb Saño, a former CCC commissioner, says that while the impact of climate change on mental health has been generally discussed in the country’s climate adaptation plans, there is still no “very comprehensive program” that addresses mental well-being in the context of a changing climate.

Most of the discussions then, he said, had also been centered on postdisaster responses to psychological needs.

A look at the National Climate Change Action Plan for 2011-2028 reveals that mental health and psychological well-being are not included in the country’s framework strategy in dealing with climate change. Yet responses to the other impacts of climate change on health are laid down in this plan.

Whether mental health services are incorporated in the local climate change action plans in cities and towns thus remains a bigger question.

“I think we are very far away from our destination when we talk about being able to address mental health in the context of climate change,” Saño says. “I don’t even see a plan or a program at the national level or anywhere else that tries to address this in a very comprehensive and in-depth manner.”

But Paraso acknowledges that integrating mental health in climate change response can be difficult because it is qualitative in nature. And while studies have been done in other countries, there is still a dearth of local studies adequately showing the link between the two, and allowing its inclusion in the government’s plans.

For Marinel Ubaldo, who survived Yolanda’s wrath in the small town of Matarinao in Eastern Samar, the absence of adequate psychosocial support left her and others still reeling from the storm’s psychological toll.

“There was no processing of our trauma, as if we were expected to just be okay after the disaster,” says the 22-year-old who is now a social worker. “Until now we still carry what happened to us.”

The community facing the Pacific Ocean and accessible only by boat or on rough roads was largely abandoned after Yolanda struck. Authorities thought everyone had died, Ubaldo says, and for days they had neither food nor water.

“For me, our unprocessed emotions felt like an added vulnerability to us,” she says. “Even now, strong winds are enough to trigger fear, and we would panic, we wouldn’t know how to survive.” 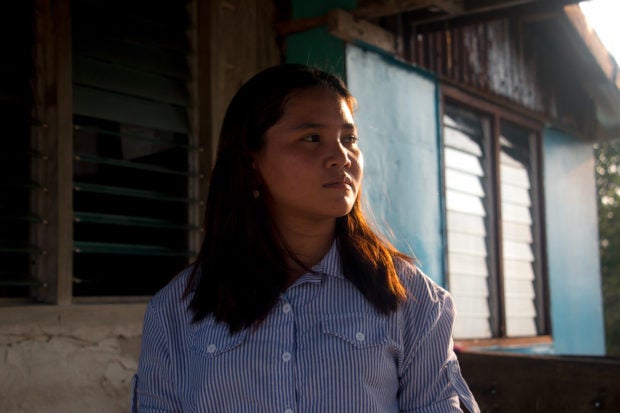 HURDLING BATTLES. For years after Yolanda pummelled her coastal community of Matarinao in
Eastern Samar province, Marinel Ubaldo was fearful of the ocean. She only learned to control her
fright and anxiety recently, but not before she had watched her family fall apart and her
community suffer after mounting losses in the storm. PHOTO BY DEMIE DANGLA/CONTRIBUTOR

Lopez says processing these emotions are important because people cannot move on and rebuild their lives without the opportunity to recover.

“So you’re dealing with 100 million Filipinos who keep on dealing with disasters right and left, and not being able to find the time and space and the appropriate service for those mental health consequences,” she says.

Beyond being a way to cope, mental health is also an adaptation mechanism for both individuals and the community, Paraso says.

“Mental health is a big chunk of how we should be adapting to [climate change] … but it is really the elephant in the room,” he says. “To be mentally well is to survive in this world. If you have a mentally well community, we’re well off to respond even if we’re faced with 10 Yolandas because we can always stand up after it.”

But ensuring a mentally capable community will not happen overnight, Paraso says. Low awareness on mental health and persisting stigma remain as roadblocks, along with lack of funding and resources to incorporate these in the health care system.

She notes that while the law does not specifically provide for funding or resources in connection with climate change, it should allow for a comprehensive mental health service incorporated in the Philippines’ primary health care system.

Filipinos are often touted as resilient, but this should not be continuously used as an excuse for the government and other stakeholders to do nothing, Saño says.

Resilience is important in coping with the ever-changing world, but relying solely on individual resilience also presents dangers, according to psychology professor Pierce Docena.

“We need to remember that we also have community resilience. Resilience at the individual level is also affected by factors bigger than the individual, like policies and physical structures,” he says, adding:

“The responsibility now is not on the person alone, but also on the government to put up an enabling environment where people will be more resilient.”

As Ubaldo builds back a life upended by Yolanda, she refuses to simply bank on resilience as a coping mechanism. She has become a climate activist, using her voice to retell her community’s harrowing experience as both a warning and a lesson to the world.

“If I accept that I’m resilient enough, it’s like expecting that these supertyphoons are already my way of life,” she says. “But why can’t we make ways to ensure that Yolanda will never happen again?” 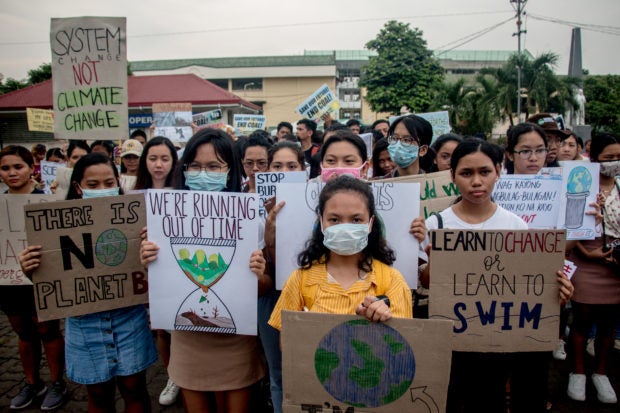 RISING ABOVE FEAR. Young people from Tacloban City, mostly Yolanda survivors, gathered
during the Global Climate Strike in September, where they joined over a million youth worldwide
to raise the alarm for climate emergency and call for climate justice. PHOTO BY DEMIE DANGLA/
CONTRIBUTOR

(Editor’s Note: This story was produced with the support of Internews’ Earth Journalism Network Asia-Pacific program.)