In Lonching Redaja’s mind, it was the cruel sea that took away her husband Genaro—and with him, a happy marriage that had seen them through the toughest of times.

On Nov. 8, 2013, terrible winds howled all morning in Tacloban City. Redaja, who lived among the dense patchwork of houses near the coast, watched in horror as the sea rose like a wall, unlike anything she had ever seen.

When the waters ebbed, Redaja found her husband’s body among the wreckage. Supertyphoon “Yolanda” (international name: Haiyan) had pummeled Tacloban, widely considered the storm’s ground zero, into a wasteland. She wanted to stay with him but her children begged her to leave. Her leg was bleeding, slashed open by sharp debris.

Six years later, a huge scar running under her knee remains a physical reminder of who and what she lost that day. But her grief and loneliness weigh just as heavy, though hidden from plain sight. In her darkest days, the feelings manifest themselves in a grim, recurring thought: “I wish I were dead, too.” 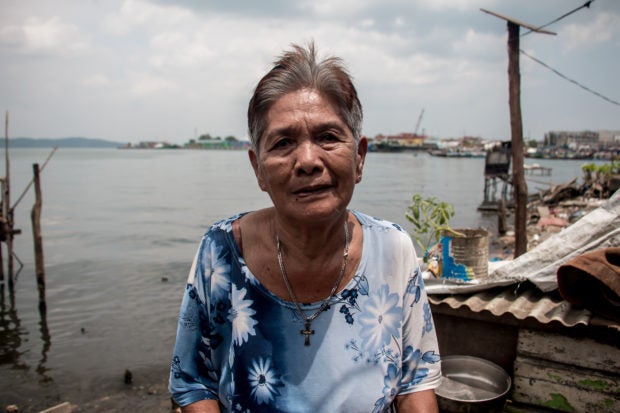 UPROOTED WIDOW. Lonching Redaja was living near the coast of Tacloban City, when
Supertyphoon “Yolanda” (international name: Haiyan) pummelled their community with its
powerful winds and storm surges in November 2013. She survived the ordeal, but lost her
husband Genaro. PHOTO BY DEMIE DANGLA/CONTRIBUTOR

One of the most powerful storms ever to hit the Philippines, Yolanda wiped out cities and towns, mostly in Eastern Visayas, within hours. Government records show that it killed over 6,000 people—a conservative estimate for many survivors.

Beyond the physical destruction, it was also a harrowing assault on the region’s psyche that produced enduring mental scars. Unraveled in Yolanda’s aftermath was a frail system that put the survivors’ mental health and needs on the back burner.

Climate change is known to affect public health, but the psychological aspect of its impact remains largely unexplored, mainly due to the challenge in finding the direct link between the two.

While a single weather phenomenon cannot be immediately linked to climate change, science has shown that a rapidly warming planet will bring more intense and extreme events, like Yolanda. Mental health experts say these can eventually take a toll on the psychological well-being of Filipinos, who are among the most vulnerable to these impacts.

Stress and anxiety are common psychological reactions to adverse events like typhoons, says Pierce Docena, a psychology professor at the University of the Philippines Visayas Tacloban College.

While these feelings generally wane over time, he says, those who are repeatedly battered by a traumatic experience and those who fail to receive adequate support may become more vulnerable to severe psychological issues. Depression and posttraumatic stress disorder (PTSD) can appear months, even years, after the event itself.

Coupled with the impacts of climate change, the “general state of uncertainty and anxiety” can definitely affect the mental health of not only individuals but also the community, Docena says.

“The impacts of disasters are also not equally felt,” he says. “Some people will suffer more because they are already disadvantaged to begin with.”

Even as relief and aid from national and international governments and groups began to flood the Yolanda-hit areas, the survivors’ psychological needs were not looked into as quickly as they should have been, according to government officials and health experts.

“When Yolanda struck, we were all shocked,” says Gloria Enriquez-Fabrigas, officer in charge of Tacloban’s health office. “The focus [then] was really more on the need for food and basic needs. Mental health was set aside during that time.” 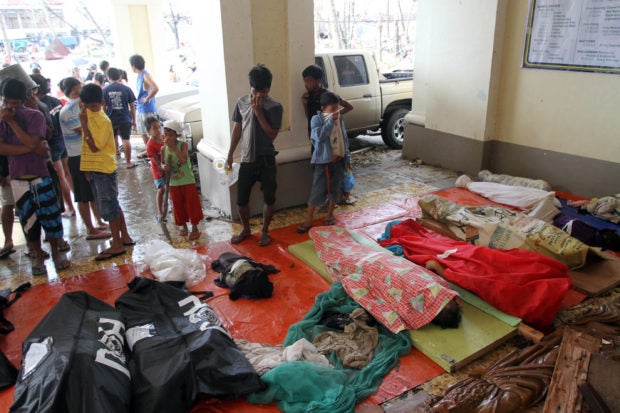 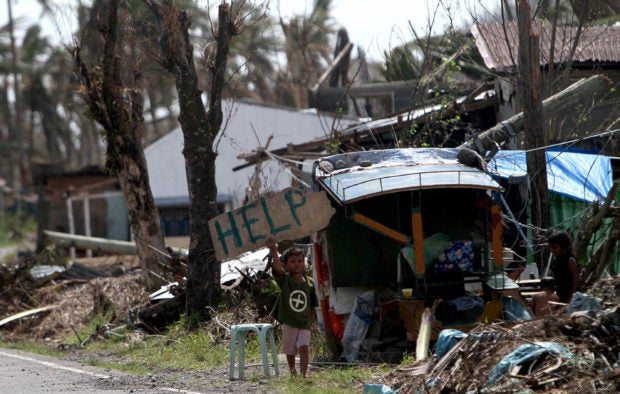 TYPHOON YOLANDA AFTERMATH / NOV 21 2013
Without any relief goods received, A boy asks for food and water on passersby along Daan Mahalika Highway, Brgy. Opong, Tolosa, Leyte. The municipality of Tolosa is also badly hit by the Supertyphoon Yolanda.
PHOTO BY RICHARD A. REYES 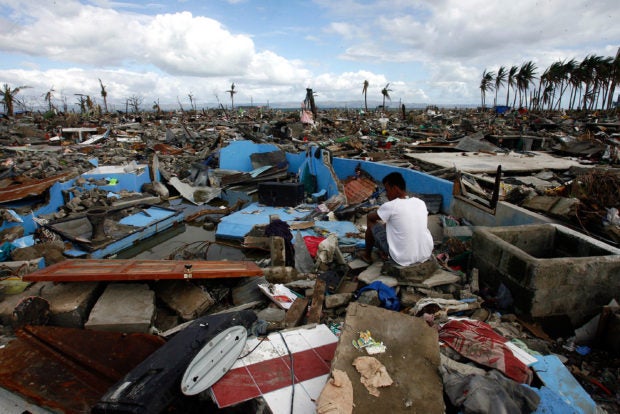 DEVASTATING TOLL. Yolanda’s physical impact on Eastern Visayas was widely documented, with
stories and visuals that show the widespread destruction caused by the storm. But its
psychological impact remains largely hidden. Years after the disaster, it continues to take a
devastating toll on its survivors, many of whom who still suffer from fear and trauma from their
harrowing experiences. FILE PHOTOS FROM PHILIPPINE DAILY INQUIRER

While there was no systematic data collection on survivors who sought or were given psychological help, the World Health Organization (WHO) estimates that, six to nine months after a disaster, 800,000 people in hard-hit areas need medical help to avert mental disorders.

Of that number, at least 80,000 may have had potential mental disorders needing medical intervention, says Jasmine Vergara, WHO Philippines’ national professional officer for mental health and substance abuse.

But aside from low awareness on mental health—a reality mirrored nationwide—the “fragile” health care system in Eastern Visayas, one of the country’s poorest regions, contributed to the slower response, Vergara says.

“It’s sad to say that the mental health program then was not really one of the priority programs, even in the delivery of basic services,” says Winnie Dorego, mental health coordinator of the regional Department of Health (DOH).

At that time, Dorego says, only 10 psychiatrists were serving a population of 4.7 million in the region’s six provinces—or a single psychiatrist catering to nearly half a million people. When Yolanda came, those needing psychological help easily doubled or tripled, she says, but the shell-shocked health care system was also too devastated to provide adequate service.

Even before Arleen Grace Rosal, a psychiatrist at Eastern Visayas Regional Medical Center (EVRMC), could properly grieve for her aunt and uncle who were killed in the surge, she had to report back to work.

But EVRMC itself, which serves the entire region, was laid to waste. And even when national and foreign medical professionals arrived, Rosal says, she felt that not enough care was extended to carers like herself.

“It was so difficult,” she recalls. “Every time I was writing down prescriptions [for my patients], I remember my own relatives. My patients told me their stories, but of course I couldn’t tell them my own, even if I was a victim myself.” 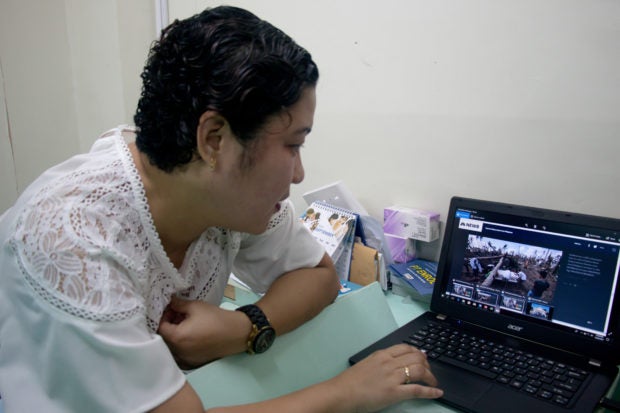 RECOLLECTION OF PAIN. Psychiatrist Arleen Grace Rosal decided to collate images and videos
of her and her family’s experiences after Supertyphoon “Yolanda” (international name: Haiyan)
flattened their community in Tanauan, Leyte province. International photographers followed her
family as they mourned and buried her uncle and her aunt who were killed by the storm surge.
PHOTO BY DEMIE DANGLA/CONTRIBUTOR

With her home in Tanauan town in ruins, Rosal slept atop medicine boxes in the hospital, in between consultations with and house visits to patients who were exhibiting various forms of trauma. She noted violent and psychotic episodes in those plagued with flashbacks of their traumatic experience; others showed behavioral changes, including anxiety, social withdrawal and temper issues.

In the ensuing years, doctors at EVRMC noted rising cases in PTSD and depression. For this report, the Inquirer sought the numbers of those who had suffered mental disorders from the hospital, the local government, and the regional health department. But exact records are yet to be collated due to the lack of a central structure at the time.

This absence of a clear structure in providing mental health services, both in the national and local governments, also led to a disorderly response, Docena says.

He points out that international organizations, which mainly provided psychological first aid, arrived in droves to give assistance and then left, like helicopters dropping relief goods. Without an interagency and multisectoral approach, the services offered were neither sustainable nor consistent.

“Other groups had pet communities that received most of the aid,” he says. “We heard of complaints that some were already ‘overprocessed,’ having received so many psychological services. But many others, especially poorer communities, were left behind.”

Redaja, for instance, cannot remember if she received any kind of help for her mental needs. But like many survivors then, she admits that these services were not at the top of her mind. Survival was the priority, of course, even as the devastating loss was beginning to take its toll.

But years after Yolanda, Docena says, there are still too many anecdotes of fear and trauma in communities. There are still stories of children who burst into tears when it begins to rain.

“Among some groups, psychosocial services even began to earn a negative impression,” he says. “They say: It’s good that we cry and let [our feelings] out, but after that, what else can we actually do?”

Despite everything that was lost, Yolanda opened a window of opportunity for mental health services in Eastern Visayas, says Dorego.

“Yolanda was stark evidence [of] why we need to address the mental health situation, because every time these disasters come, it takes a mentally healthy individual to cope with challenges,” she says.

After Yolanda exposed the health care system’s shortcomings, the WHO, in partnership with the DOH, rolled out the Mental Health Gap Action Program aimed at cascading mental health services to all health units in Eastern Visayas.

“By December 2014, for the first time in the Philippines, it became the first region where mental health care and support were in all levels of care—primary, secondary and tertiary,” says Vergara.

This meant that rural health unit personnel, barangay health workers and even barangay public safety officers were trained in assessing and acting on mental health concerns in their areas, to ensure that no one was left behind.

But the challenge then was raising enough awareness for people to seek help and breaking down the stigma that still hounds mental health, Dorego says.

“When you ask some people about mental health, they think it’s just someone with ‘katok,’ as we say in Waray, or ‘sira sa ulo’ (mental disorder),” she says. “Mental health is an anchor to everything … There is no health without mental health.”

Local governments, like Tacloban’s, also saw the need for proper response. In its Local Climate Change Action Plan, it earmarked a P5-million budget for the period 2016-2021 to enable government agencies and personnel to respond to psychosocial needs through community-based intervention.

But even with those plans on paper, vulnerabilities such as lack of adequate housing and decent livelihood continue to affect survivors’ mental well-being even years after the region’s biggest tragedies.

Says Dorego: “Mental health is not a stand-alone thing. It has to [encompass] all the other things that surround a person.”

But for Redaja, those concerns hardly matter. Living alone in a bare concrete resettlement house an hour’s ride away from downtown, she worries more over where to get her next meal.

When she manages to gather loose change from selling woven coconut leaves used for puso (boiled rice), she takes the long ride to the city proper and the site of her old home, where she lost Genaro.

“The wound will heal,” she says, gesturing toward her knee. “But the memory of what happened that day will leave me only when I die.” 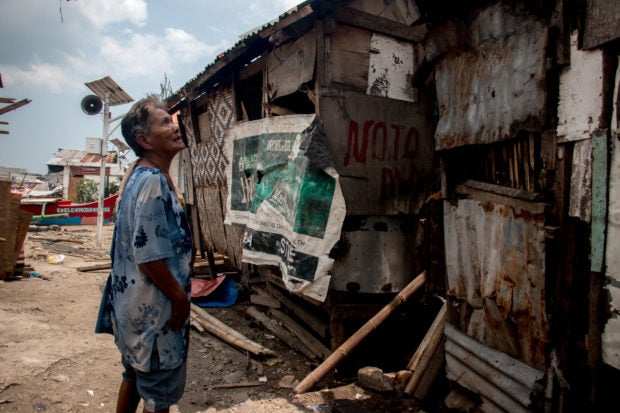 GLIMPSE OF HOME. Even if she already lives in a resettlement site about an hour away, Lonching
Redaja still travels to where her old home stood near the coastline, which had already been
declared as a “no-dwell zone.” Communities, however, still chose to rebuild here, since many of
them rely on the sea for their livelihood. For the widowed Redaja, the community offers her
solace. PHOTO BY DEMIE DANGLA/CONTRIBUTOR 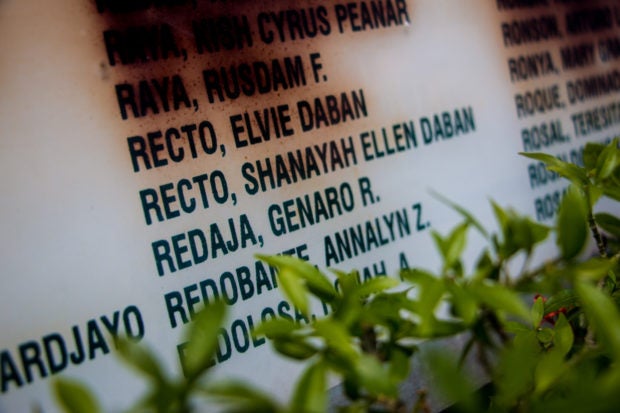 IN MEMORIAM. Lonching Redaja’s husband, Genaro, is among the thousands of names listed as
the victims of the Supertyphoon “Yolanda” (international name: Haiyan) in a marker erected near
the coast. To this day, Lonching does not know where her husband was laid to rest. PHOTO BY
DEMIE DANGLA/CONTRIBUTOR

(Editor’s Note: This story was produced with the support of Internews’ Earth Journalism Network Asia-Pacific program.)