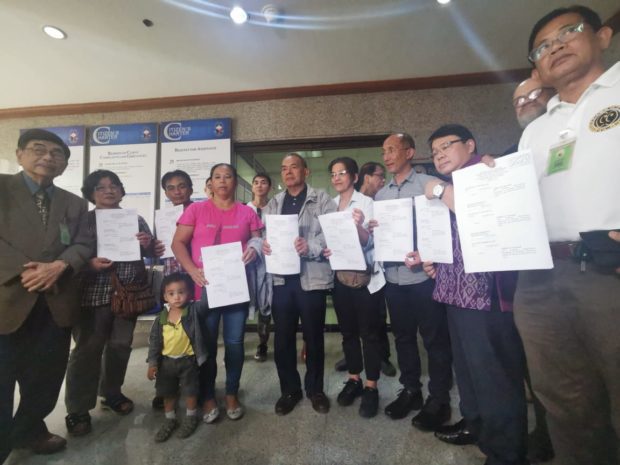 The Volunteers Against Crime and Corruption files before the Office of the Ombudsman a motion to reopen the case against former President Benigno “Noynoy” Aquino III and several others over the botched 2015 Mamasapano operation on Friday, November 8, 2019. Joining VACC are families of the 44 Special Action Forces members killed in the police operation, and Baguio City Mayor Benjamin Magalong. Katrina Hallare/INQUIRER.net

MANILA, Philippines — The Volunteers Against Crime and Corruption (VACC) on Friday asked the Office of the Ombudsman to reopen the case against former President Benigno “Noynoy” Aquino III and several others over the botched 2015 Mamasapano operation and elevate the charges to homicide.

VACC through its representative, Atty. Ferdinand Topacio, said they have new evidence to warrant a homicide case against Aquino, former Philippine National Police chief Alan Purisima, and former Special Action Forces chief Getulio Napeñas. Previously, the Office of the Ombudsman – under the term of former Supreme Court Justice Conchita Carpio Morales – filed graft and usurpation charges against Aquino. However, in June, under the new leadership of former Supreme Court Justice Samuel Martires, the Office of the Ombudsman withdrew the case, saying they had no sufficient evidence against the former President.

Topacio said VACC filed 44 counts of reckless imprudence resulting in homicide against Aquino, Purisima, and Napeñas, and that they got their new evidence from former Criminal and Investigation and Detection Group chief and now Baguio City Mayor Benjamin Magalong.

In September, the Supreme Court upheld the Ombudsman’s earlier decision not to file homicide charges against Aquino and others.

Asked if the case will be affected by the high court’s ruling, Topacio said: “That decision is only applicable with respect to the exercise of the discretion by the former Ombudsman.”

“This is a new investigation, it will reopen the case for the examination, ibig sabihin (this means) we will start from the beginning,” Topacio added.

Meanwhile, Magalong, without going into detail, said his evidence will be based on the board of inquiry report on the Mamasapano operation, which was intended to capture or kill the notorious terrorist and bomb-maker Zulkifli Abdhir, also known as Marwan. /kga

Aquino faces raps for usurpation of authority over Mamasapano mess

Aquino not liable for death of SAF44 – ex-solgen Hilbay