Woman says she cleaned up after boyfriend killed his fiancee 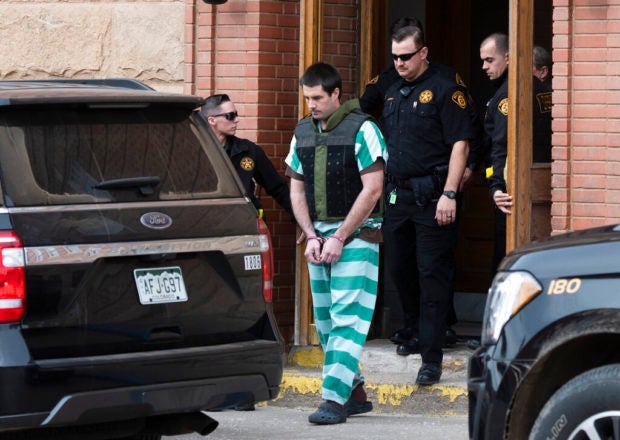 In this April 5, 2019, file photo, Teller County Sheriff deputies lead Patrick Frazee out of the Teller County Courthouse in Cripple Creek, Colo. A woman who was having an affair with Frazee, who is charged in the beating death of his fiancee, said Thursday, Nov. 7, 2019, she helped clean up the bloody aftermath before he burned the body, while the defense raised doubts about whether Frazee truly had so much power over her to maintain her silence and cooperation. (Christian Murdock/The Gazette via AP, File)

CRIPPLE CREEK, Colorado — A woman who was having an affair with a Colorado man charged in the beating death of his fiancee said Thursday she helped clean up the bloody aftermath before he burned the body, while the defense raised doubts about whether he truly had so much power over her to maintain her silence and cooperation.

Krystal Lee testified for a second day in the trial of Patrick Frazee, who has denied killing Kelsey Berreth at her townhome in Woodland Park, a mountain community of 7,500 people about two hours south of Denver.

Berreth was last seen nearly a year ago near her home, and no sign of her body has been found.

Lee, who worked as a nurse in Idaho, said she grabbed several blood-spattered items from Berreth’s home to be burned, including a stuffed animal, children’s building blocks and what she thought was a Bible, according to the Colorado Springs Gazette . She also testified that Frazee and Berreth’s baby daughter was in the home when the blindfolded mother was bludgeoned to death with a baseball bat.

Standing in a clear patch of Frazee’s central Colorado ranch, surrounded by pine trees, Lee described Frazee putting the body in a dry water trough and lighting it on fire. At one point, she said, flames were as high as the nearby trees, so Frazee covered the blaze with what appeared to be metal roofing.

Lee struck a deal with prosecutors and pleaded guilty in February to evidence tampering, acknowledging she took Berreth’s phone to Idaho at Frazee’s request to make it look like Berreth had left the state.

Defense attorney Adam Steigerwald seized on that deal and repeatedly asked Lee if she was aware that she could be facing life in prison if she didn’t accept it and cooperate with investigators. He also questioned whether she has been fully truthful during her 10 hours of testimony, KOAA-TV reported.

Prosecutors have not offered a motive for Frazee to kill Berreth, but her parents argue in a wrongful death lawsuit that they believe he wanted full custody of the couple’s daughter.

Frazee would be sentenced to life in prison without parole if he is convicted of first-degree murder. /jpv