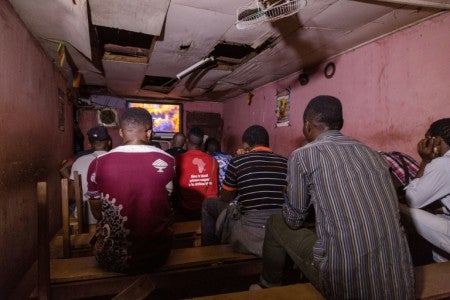 Secret home: The video club in Yaounde is a haven for gay men in a country where same-sex relations are illegal. Image: STR/AFP

The club is secret. You have to know someone who will guide you to the address — off a busy street in Cameroon’s capital, down a dingy alley to a door with the unwelcoming message in chalk: “No entry.”

Inside is a rectangular room, dark and humid. The flickering light of a video screen illuminates faces of young men sitting on benches — members of a video club catering exclusively for gay men, a haven in a society where it is perilous to be same-sex attracted.

“We opened this place in 2016 to give young people somewhere where they can just breathe for a while,” says Jean-Pierre, 51, the founder of the club, who prefers not to give his full name.

“In the afternoon, we show documentaries about the gay community, with comedy series in the evening and later in the night, films of a sexual nature,” he explains.

Maxime, 30, and his companion come several times a week. “It’s vital to be able to find our own kind, to talk with people who are like you, who understand you.”

When his family rejected him, Maxime found refuge at Jean-Pierre’s club. “I lived in this room for nine months, I had no place else to go,” he says.

On another bench, a young man is sleeping peacefully, a sheet drawn over his body and part of his face.

A few feet away, two men openly flirt. “This is also a place for those who have no home, where they can meet,” Maxime says. 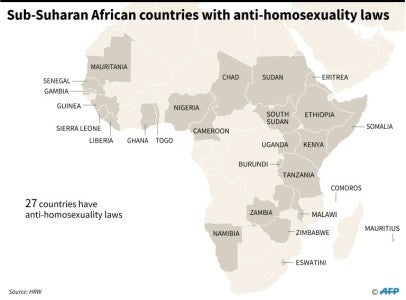 In Cameroon, having sexual relations with another man is a crime punishable with up to five years in prison.

Convictions are rare, but illegality makes gays easy prey for racketeers and homophobes.

Despite its secrecy, the refuge has become known to policemen of malicious intent.

The premises have been raided at least four times this year, Jean-Pierre says, adding that he had recently been held for two weeks at a police station, where he said he was tortured.

“They told me, ‘confess you’re the queers’ godfather, you homo,’ and beat me on the soles of the feet with the flat of a machete blade,” he says.

Criminals claiming to be plain-clothes police sometimes show up to extort gays, Jean-Pierre says. Between films, he will often instruct the audience “what to do in case of arrest, to know their rights.”

One night Maxime endured a terrifying experience. “They burst in here, put us in their truck, stripped us of all our things — money, cellphones and clothes as well — then they threw us out naked on the far side of town,” he recalls, his eyes looking at a spot on the wall.

In 2018, 1,134 cases of violence and violations of the rights of LGBTI people were recorded in the central African country, according to a report by two non-governmental organizations, Humanity First and Alternatives Cameroun.

The club also exists to help gays aware of the risk of HIV, which flourishes wherever there is stigma.

The prevalence of HIV among adults in Cameroon in 2016 was 4.3%, according to a study supported by the American Agency for International Development (USAID).

But the rate soars among high-risk groups such as gays, rising to 45.1% in Yaounde, according to its figures for 2016. 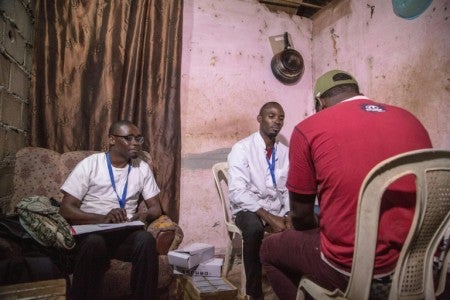 A doctor gives condoms and lubricants to a member of the gay community in a room at the video club. Image: STR/AFP

In a corner of the video club, three young men are sitting on a battered sofa, looking tense and waiting for their names to be called. One of them gets up to go through a narrow door into an antechamber, where he is greeted by two men in white coats.

Roughly once a week, teams from Humanity First visit the premises to undertake HIV tests, provide advice and condoms.

“Most of them don’t go to health centers for fear of being stigmatized, so we go to them,” said Jean-Paul Enama, the head of Humanity First.

In the video club, “the rate of HIV prevalence is very high. The aim is to get those who need it into treatment and to prevent the virus from spreading,” Enama said.

Jean-Pierre said the fight against AIDS was embedded in his soul — he had seen several dear friends die from the disease. Every day, dozens of men come to the video club to get condoms — safely, no questions asked.

The little club is cruelly short of funds and battles intimidation and arbitrary arrests, but Jean-Pierre vowed to do all he could to keep it open.

“I dare not imagine what would become of them if I was forced to close,” he said. IB/JB

Gay conversion therapist comes out: ‘I was a religious zealot that hurt people’

Georgina Wilson slams comment on son’s ‘gay gestures’: ‘Nothing wrong with being gay’