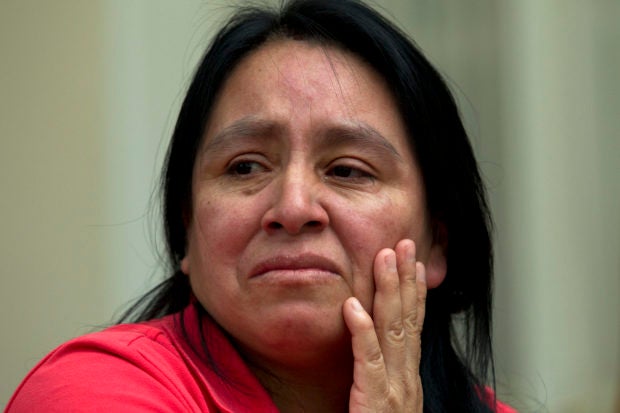 FILE – In a Wednesday, July 17, 2019 file photo, Maria Chavalan-Sut of Guatemala, one of a number of immigrants taking sanctuary at houses of worship, speaks during an interview at the Wesley Memorial United Methodist Church in Charlottesville, Va. U.S. Immigration and Customs Enforcement is reversing course months after threatening six-figure fines against immigrants taking sanctuary at churches. (AP Photo/Jose Luis Magana, File)

Seven women have been notified that ICE, using its discretion, is withdrawing its intent to pursue fines ranging from $300,000 and $500,000 for their refusal to leave the country as ordered, according to the National Sanctuary Collective, a coalition of attorneys, organizers and other advocates for them. They count it as a victory.

“We knew that these exorbitant fines were illegal and were nothing more than a tool to scare our clients and retaliate against them for fighting back and standing up to this administration,” attorney Lizbeth Mateo, who represents a Mexican woman living at an Ohio church, said in a statement. Mateo said immigration officials should exercise the same discretion “to release sanctuary families.”

The immigrants have remained in the U.S. in violation of the law and still are subject to removal orders that ICE will enforce “using any and all available means,” agency spokesman Richard Rocha said in an email. He said ICE also could reassess the fines.

Immigrants have sought relief from deportation at houses of worship because immigration officials consider them “sensitive locations” and avoid enforcement action at such sites. Maria Chavalan-Sut, an indigenous woman from Guatemala, seeking asylum moved into a United Methodist church in Charlottesville, Virginia. Another woman has lived in sanctuary with her 11-year-old son in Austin, Texas, for more than two years.

Mateo’s client, Edith Espinal, has stayed at a Columbus church for the past two years. She was notified in June that she faced a fine of nearly $500,000.

In a statement, she said ICE’s reversal on the fines is “an example of what speaking out and organizing can accomplish.”

The agency said it issued a total of nine notifications in June about its intent to pursue fines. It said Wednesday that eight of those have been withdrawn, and one still is being pursued. It didn’t identify those cases or name the immigrants involved.

The six-figure penalties were another reminder of how President Donald Trump has made cracking down immigration – legal and illegal – a top domestic priority.

Immigrants who are free on bond but ordered to leave the country are typically given a date to report to immigration authorities for removal. Others are ordered to check in with authorities, which, under former President Barack Obama-era policies, generally didn’t result in deportation unless the person was convicted of a serious crime in the United States.

Trump lifted those restrictions almost immediately, causing people to get deported when they reported to ICE offices as instructed and discouraging others from coming. /gsg