Biden: Trump has ‘no idea’ about working-class struggles 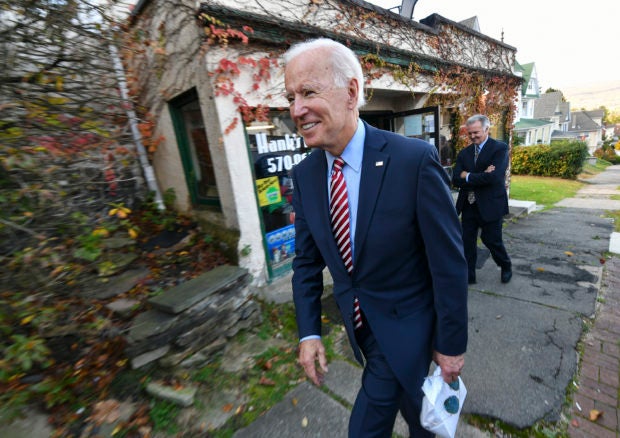 After scrapping with fellow Democrats for weeks, Biden returned to his hometown of Scranton to focus on his ultimate foe: Trump. The former vice president sought to dent Trump’s argument that regardless of what working people may think about him personally, the actions of his administration have helped them.

“This administration has no idea what hard-working, decent, ordinary Americans are going through,” Biden said of middle-class struggle in a growing but uneven economy.

“Go back to your old neighborhoods and ask them how they’re doing,” Biden said, lamenting that the rising cost of health care, college and housing deny the “breathing room” that should define middle-class security. “Too many middle-class and working-class folks can’t look their kids in the eye any longer and say it’s going to be OK and mean it.”

Trump appeared later in the day in Pittsburgh, at the opposite end of the state, but made no mention of Biden.

The speech, which was billed as an economic policy address, is the type of forum where Biden often has his strongest moments in a campaign that has contended with verbal missteps and inconsistent debate performances. But it’s becoming increasingly difficult for Biden or any other Democratic White House hopefuls to compete with the daily cacophony of Washington as Trump rails against the House impeachment inquiry.

Biden was reminded of that on the eve of his speech. On the same day that a top U.S. diplomat offered damning testimony against the president , Trump scrambled the conversation by saying Democrats are effectively “lynching” him. When Biden’s campaign joined the resulting chorus of critics , the president’s re-election campaign revived a 1998 video of then-Sen. Biden using the same “lynching” metaphor when discussing impeachment proceedings against President Bill Clinton. Biden tweeted an apology for his choice of words Tuesday night, but made no mention of the matter Wednesday in Scranton.

Instead, he highlighted his plans on a host of issues, including repealing Republican tax cuts, taking action on climate change, strengthening gun regulations, spending more on education and expanding government health insurance.

The visit is an early effort to block a Trump victory in Pennsylvania next year and narrow his path to re-election. The president won the state by about 44,000 votes in 2016, taking a state that had sided with Democrats in presidential races since 1988. Reclaiming Pennsylvania, along with Michigan and Wisconsin, would put the eventual Democratic nominee on track to winning the White House.

Biden recalled stories from his childhood in Scranton, including his father’s “long walk” up the stairs of their home to tell 10-year-old “Joey” that the family had to move to Delaware because the elder Biden had lost his job.

Turning to Trump, he said, “I think the longest walk his father ever made was to drop off $400 million in his trust account,” Biden said. It was a reference to reports that Fred Trump steered hundreds of millions of dollars to his son as the future president built his real estate and promotions business.

Biden argues that he’s the Democrat best positioned to defeat Trump by reassembling President Barack Obama’s winning coalition to reclaim some working-class whites who sided with Trump while also reversing Democrats’ decline from 2012 among non-white voters in cities like Philadelphia, Detroit and Milwaukee.

For his part, Trump takes credit for an economy that has continued a steady upward trend since the recovery from the 2008 crash began during Obama’s administration. Trump touts a 50-year low in unemployment, but the reality is more complicated, with ever-widening income inequality, a rising national debt and the uncertainty of Trump’s multi-front trade wars.

Still, Americans’ assessment of how Trump handles the economy has been consistently been higher than his overall job approval rating.

Biden railed against escalating corporate profits and salaries for CEOs. He held up the decades after World War II, when wage increases reflected the rise in U.S. productivity, in contrast to the last 40 years, when inflation-adjusted wages remained relatively flat for all but the highest wage-earners, and the investment class amassed fortunes reminiscent of the Gilded Age.

That span covers nearly all of Biden’s career as a U.S. senator and vice president.

In using the economy as an argument against Trump, Biden also indirectly highlighted differences with progressive Democratic rivals Elizabeth Warren and Bernie Sanders.

Biden touted tax changes that would treat capital gains on investments essentially as wages — a move that would bring tax increases for the wealthiest Americans. That’s short of Warren’s proposed direct tax on personal net worth exceeding $50 million and Sanders’ tax on Wall Street transactions.

Even as Biden knocked corporate excess Wednesday, he slipped in a caveat: “I think corporations can do a lot of good things.”

For at least one member of the hometown crowd, Biden struck the right notes.

“All these young people want drastic change,” said Elaine Sparko, a 65-year-old retired teacher who came to hear Biden. “I think he is a person who could stand toe to toe with Trump. I think we need a moderate.” /gsg