SANTIAGO, Chile  – Tens of thousands of protesters flooded Chile’s capital, setting up flaming barricades and clashing with riot police Wednesday after an apology and promises of economic reforms from President Sebastián Piñera failed to quell unrest and rioting has led to at least 18 deaths. 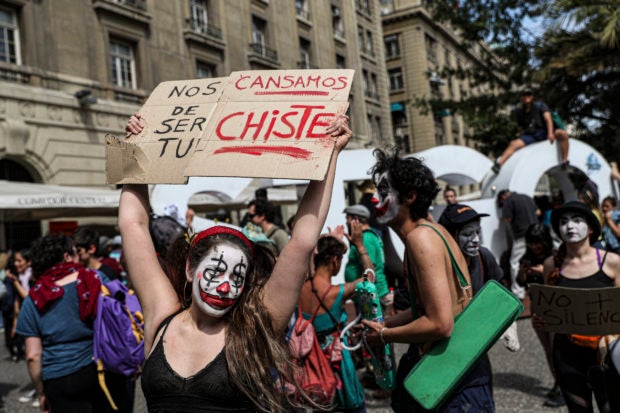 A woman holds a sign that reads in Spanish “We are tired of being your joke” as Artists, clowns, mimes and actors protest against President Sebastian Piñera’s government, at the Plaza de Armas in Santiago, Chile, Wednesday, Oct. 23, 2019. Rioting, arson attacks and violent clashes wracked Chile as the government raised the death toll in an upheaval that has almost paralyzed the South American country long seen as the region’s oasis of stability. (AP Photo/Esteban Felix)

Trade unionists in the world’s top copper-producing country joined demonstrators with a general strike in a movement that started with anger at a small rise in subway fares, but expanded into protests against inequality and to demand improvements in education, health care and wages in one of Latin America’s wealthiest, but most unequal nations.

Many protesters in Santiago waved the national flag and shouted: “Chile has woken up!”

Police responded by spraying water cannons and firing rubber bullets and tear gas. Similar scenes were repeated in towns and cities all along the long, narrow South American country of 18 million people.

Millions of students were still unable to attend classes, several subway stations were shut and long lines continued to form outside gas stations and supermarkets after many were torched or destroyed.

The unrest erupted last week when students began to jump subway station turnstiles to protest a 4-cent subway fare rise that the Chilean government said was needed to cope with rising oil prices and a weaker currency.

Most of the protests have been peaceful with demonstrators of all ages banging pots to demand reforms. But the unrest also involved riots, arson and looting that have wracked Chile for six days, nearly paralyzing a country long seen as an oasis of stability.

On Tuesday night, Piñera announced economic reforms including an increase in state pension and a minimum wage hike. But many say the 69-year-old billionaire businessman reacted late and the announcement failed to calm anger in the streets.

“You don’t know what can happen to you,” said retiree Magaly Munoz. “I understand that people are dissatisfied, but they can’t break into your home and loot businesses. I can’t support that.”

Human rights groups have expressed concerns about how security forces have handled the protests after the government ordered a military curfew. It was first such curfew — other than for natural disasters — imposed since the country returned to democracy in 1990 following a bloody 17-year dictatorship.

“We’re worried,” José Miguel Vivanco Americas director at Human Rights Watch, told The Associated Press. “The images that we’ve received from credible sources, trustworthy sources show that there has been an excess of force both by police as well as some soldiers.”

About 20,000 soldiers are patrolling the streets, nearly 200 people have injured and some 5,000 have been arrested.

Shortly before the rioting broke out last week, Piñera boasted in an interview that Chile “looks like an oasis” in the region because it has a stable democracy and a balanced and growing economy that has been creating jobs and improving pay.

After the protests erupted, Piñera rolled back the subway hike while also declaring a state of emergency. He said this week that Chile is “at war.”

He then took a more conciliatory tone, apologizing and announcing an agenda calling for increasing the lowest monthly pensions from $151 to $181, raising the monthly minimum wage from $413 to $481 and rescinding a 92% rise in electricity rates scheduled to take effect next month. It would also include a tax increase for anyone earning more than $11,000 a month.

Chile has long been regarded as the best-managed in Latin America. But like other nations in the region, it has suffered fiery protests in recent weeks after a commodities boom in the 2000s that brought prosperity was followed by lower prices. Education and medicines are costly, water has been privatized since the dictatorship and many Chileans receive miserly pensions while families earn $550 to $700 a month./gsg