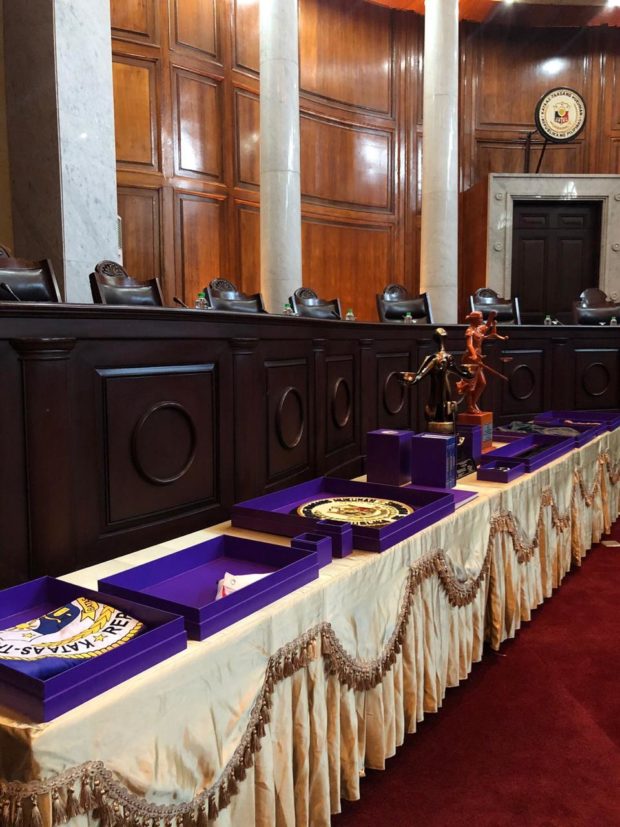 The set up of the traditional retirement rites of a Supreme Court associate justice. Photo from SC PIO

MANILA, Philippines–He may have missed five chances to be Chief Justice, but Senior Associate Justice Antonio Carpio’s fellow magistrates, in acknowledging his service to the Judiciary, unanimously passed a resolution granting him the retirement privileges of a Chief Justice.

“His peers unanimously granted him the retirement privileges of a Chief Justice. I think this is the least the Court could do for its esteemed member who faithfully served the longest term as Associate Justice,” retired Chief Justice Artemio Panganiban said during the testimonial lunch hosted by the Makati Business Club (MBC).

Carpio will retire at the mandatory age of 70 on Oct. 26 after serving as associate justice for 18 years, one of the longest-serving magistrates since 1901. After retirement, Carpio voted to continue his advocacy of defending the country’s sovereignty against China.

Panganiban said Carpio has opted to bow out of the Supreme Court quietly by choosing a simple dinner instead of the traditional majestic ceremony given to outgoing magistrates.

“True to his innate modesty and humility, he declined the court’s traditional majestic ceremony at its hollowed session hall to honor its retiring magistrates in return for a simple dinner next Friday,” retired Chief Justice Artemio Panganiban said during the testimonial lunch.

Being the most senior magistrate, he was always automatically nominated for the Chief Justice position. However, his junior always gets the post. He also does not always accept automatic nomination as in the case of the vacancy after Maria Lourdes Sereno was ousted via a quo warranto. Carpio also declined the automatic nomination with the retirement of Lucas Bersamin.

Associate Justice Marvic Leonen, in an interview over CNN’s “The Source.” said Carpio is “the best chief justice we never had. I agree with that more than a thousand percent.”

Even Bersamin acknowledged Carpio’s leadership. He said he could not imagine a court deliberation without Carpio.

Carpio will be the last magistrate to retire this year. His replacement will be President Rodrigo Duterte’s 12th appointee to the Supreme Court. /jpv