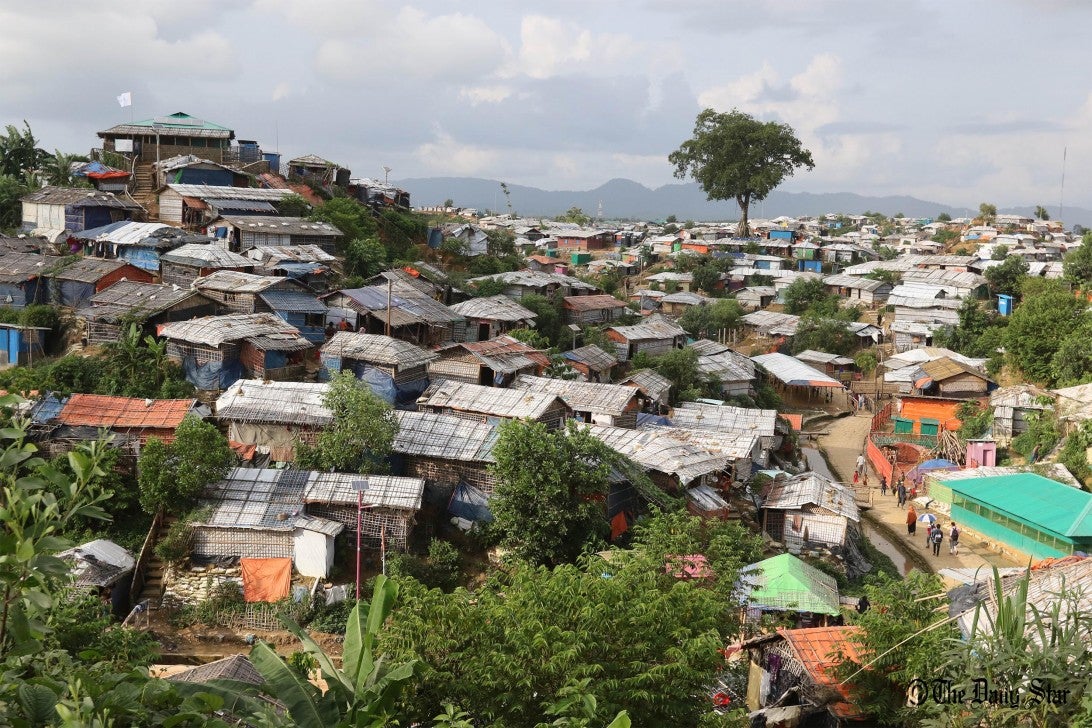 A view of the Rohingya camp in Cox’s Bazar. Star file photo

The damage is equivalent to a loss of over Tk 2,420 crore, said a report of the Ministry of Environment, Forest and Climate Change.

The report, containing data updated on October 7, caused grave concern among members of the parliamentary standing committee on environment.

The committee will hold a meeting with local administration officials in Cox’s Bazar today to come up with recommendations on how to tackle the crisis.

In today’s meeting, environment ministry officials will place the report on environmental impact in Ukhiya and Teknaf upazilas since the Rohingya influx started in August 2017.

According to the report, a total of 6,164.02 acres of reserved forest have been razed to make way for the settlements in the upazilas. Trees have been chopped down for firewood in an additional 1,837 acres of forest.

Rohingya refugees have been living in 34 camps, of which 26 are in Ukhiya and eight in Teknaf.

In the 6164.02 acres of reserved forest, the damage to the biodiversity is equivalent to an estimated loss of about Tk 1,409 crore, the report said.

It said a large number of shanties built after razing the trees caused extensive damage to the biodiversity. Therefore, it may take a long time for an expert team to properly assess the damage.

In September 2016, an expert team of the government assessed how the construction work of Single Point Mooring in Moheshkhali upazila of the district impacted the biodiversity of a nearby reserved forest.

The estimation regarding the damage to biodiversity by Rohingya settlements were made in light of the findings of the 2016 assessment.

Following a recent proposal of the forest department, the ministry formed an outline of a 10-member expert team to thoroughly assess of the damages to biodiversity.

Besides, other forest resources worth around Tk 456 crore were damaged.

Following a meeting at the Prime Minister’s Office last month, the Cox’s Bazar administration issued a notice restricting all sorts of construction on properties belonging to the forest department.

No fuel has been distributed among the Rohingyas to cook with. As a result, the refugees have chopped down and, in most cases, uprooted trees on 1,837 acres of reserved forest (580 acres planted and 1,257 acres natural). These forests were outside the camps.

The damage is equivalent to a loss of over Tk 135 crore, it said.

Saying that the forests in Cox’s Bazar were the natural habitat of the critically endangered Asian elephant, the report mentioned that a 2017 report of the International Union for Conservation of Nature found only 63 Asian elephants living in the forests of Ukhiya, Teknaf, and Ramu upazilas.

The report said those elephants used to travel to Bandarban or Myanmar through Panerchora-Rajarkul and Balukhali-Ghumdhum corridors.

But the Panerchora-Rajarkul corridor was closed following the construction of a cantonment in Ramu. After the Rohingya influx and subsequent construction of their shanties, the Balukhali-Ghumdhum corridor got closed too, said the report.

As a result, incidents of elephant-human conflict increased, resulting in the deaths of at least 12 Rohingyas.

Such instances may increase in the future, the report warns.

“What Rohingya people have done in Ukhiya and Teknaf is not mere damage to the environment or biodiversity, it’s simply devastation,” Saber Hossain Chowdhury told The Daily Star after visiting the area yesterday.

“The committee will come up with some comprehensive suggestions on how to stop further deterioration of the situation and how to make up for the loss,” he added.