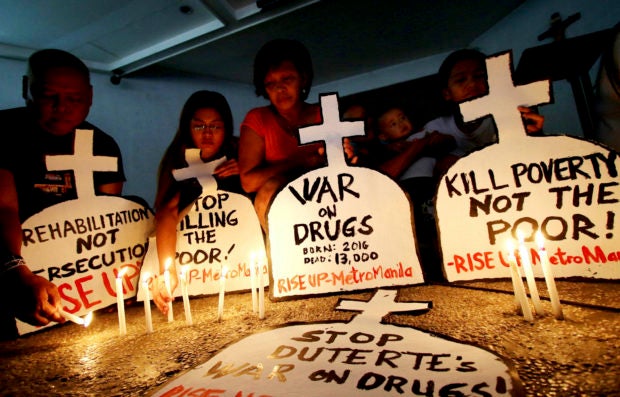 PROTEST VS KILLINGS Relatives of slain drug suspects light candles to remember their loved ones at a Church-sponsored gathering in Manila. INQUIRER file photo / RICHARD A. REYES

MANILA, Philippines – The Makabayan bloc in the House of Representatives has sought an investigation into a possible breach of Philippine National Police (PNP) rules, particularly its alleged failure to submit officers involved in drug war deaths to inquest proceedings.

House Resolution 440 was filed on Wednesday by the lawmakers, a month after it was revealed that only 253 police officers were subjected to inquest proceedings, or a summary investigation by public prosecutors aimed at determining whether the person involved should either be arrested or charged.

Makabayan claims that this goes against Chapter 3, Rule 15.4 of the Revised PNP Operation Procedures Manual, which states that if a suspect dies in an armed confrontation, “the Team Leader of the operating unit shall submit the incident for inquest before the duty Inquest Prosecutor prior to the removal of the body from the scene, except in areas where there are no Inquest Prosecutors.”

“As admitted by the PNP during the said budget deliberations, of the 253 subjected to inquest proceedings, only 150 officers were brought to an inquest prosecutor on charges of killing a drug suspect, while 103 had been charged in court,” the resolution said.

“There were only 594 police officers administratively charged in connection to the killings, particularly those related to the anti-illegal drugs campaign,” it added.

The war against illegal drugs has been one of the key programs of President Rodrigo Duterte’s administration.  Prior to his election in 2016, Duterte promised to rid streets of drugs, saying that his administration would be bloody.

There are several drug cases that stirred uproar from the public for allegedly being exhibiting signs of suspects being summarily executed.

One of which is the death of teenager Kian delos Santos, whose arresting officers were convicted of murder for planting evidence on the victim and eventually killing him despite his pleas.

However, the Delos Santos’ case is the only drug war-related case that has been resolved. /jpv

“There is clear violations (sic) by the  PNP — both the responsible officers and members — of their  own investigation procedures as contained in the operations manual, thus, putting into serious question the supposed regularity of the anti-criminality and anti-drug operations of the the Duterte administration,” they said.

“It is imperative that the House of Representatives, which yearly allocates a sizeable budget to the  PNP’s  anti-criminality campaign, should look into this serious breach of procedures that not only undermines the institution but also resulted to violations of the rights of our people and a breakdown even of  law and order,” they added. /jpv