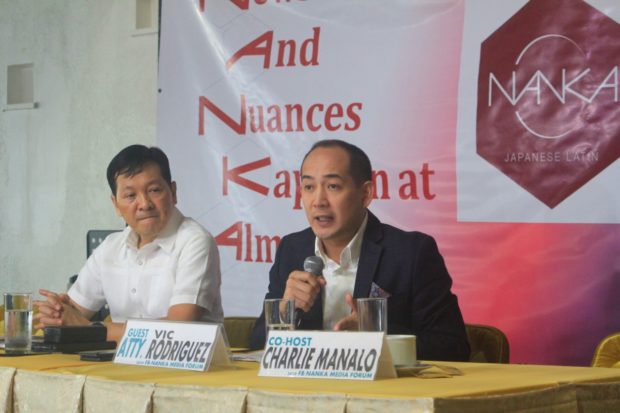 According to Vic Rodriguez, who handles Marcos’ protest being heard by the Supreme Court (SC) sitting as the Presidential Electoral Tribunal (PET), the reason why they are not ‘aggressive’ — unlike Robredo’s  camp — is because they know the details of the case.

“Why aren’t we as enthusiastic as they are in calling for the protest’s dismissal? It’s because we understand the true meaning of the law, we know how to understand and we study the case and its meaning,” Rodriguez said during the Nanka forum on Friday.

“That’s my consistent request for Mrs. Robredo, this case is not an ordinary case, so before she goes out and talks on the national TV and whatever press conferences or interview, we wish that she read the case. Please understand the case and the applicable rules,” he added.

The PET last Tuesday ordered the release of the results of the initial recount and asked both sides to comment on the issue. After the SC order, Robredo went live and answered questions on statements made by Marcos.

Robredo also noted this was a development as SC appeared to grant the motion of her lawyer Romulo Macalintal, although she admitted that she is frustrated why the case was not dismissed.

Marcos separately insisted this was a victory for his side, as the protest continues.

READ: With no substantial recovery, Marcos now wants recount of other areas–Robredo

READ: Marcos: I was robbed of 3 years as VP; Robredo: I’m not the thief between us

Rodriguez also chided Robredo for not paying the required fees for her counter-protest. The Vice President recently said that there should be no fees at all if only Marcos accepted his defeat.