With no substantial recovery, Marcos now wants recount of other areas–Robredo 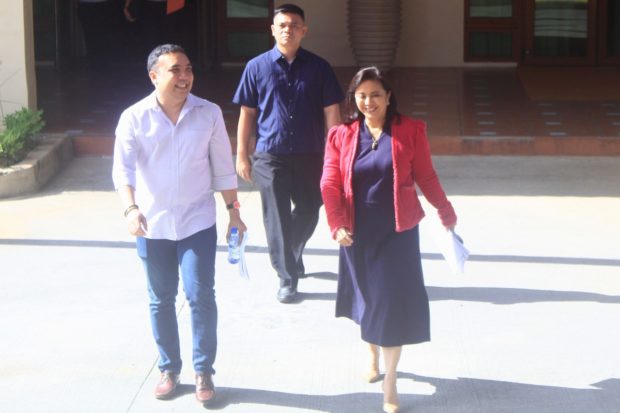 Vice President Leni Robredo and her spokesperson Atty. Barry Gutierrez in Quezon City after holding a news conference when the Supreme Court ordered the release of a committee report on the initial recount of the Marcos poll protest. INQUIRER.net photo / Gabriel Pabico Lalu

MANILA, Philippines – Vice President Leni Robredo has insisted that former Senator Ferdinand “Bongbong” Marcos Jr. only wants to include other areas in the vote recount because there was no substantial recovery in the areas he initially chose for his poll protest.

Robredo said in a press briefing on Tuesday that Marcos should have picked the provinces in the Autonomous Region of Muslim Mindanao (ARMM) instead of the three pilot provinces — Camarines Sur, Iloilo, and Negros Oriental.

“What Marcos wants is to have additional provinces from ARMM, if I am not mistaken Lanao del Sur, Maguindanao, and Basilan.  He should have picked it from the beginning,” Robredo told reporters at the Quezon City Reception House.

The Vice President also clarified that her camp did not have a hand in picking the areas where votes would be recounted — alleging that Marcos may be resorting to these tactics as there was no substantial recovery of votes on Marcos’ end.

“Why did he chose CamSur, Iloilo, and Negros Oriental, which we did not have a say in what he picked.  Now that he did not get any [substantial recovery], he wants to look for it in other areas,” Robredo explained.

“For me, we all know that even if he tries looking anywhere, he cannot find anything.  But the mere fact that this issue drags on for so long, he is only given a platform to spread propaganda and lies,” she added.

Earlier the Supreme Court (SC), sitting as the Presidential Electoral Tribunal (PET), allowed the release of a committee report on the results of the revision of ballots from the three pilot provinces.

Robredo’s side was also asked to give a memorandum on the possible recount of votes in the ARMM provinces, something that the Marcos camp desires.

However, she maintained that poll protest has no other course but to be dismissed, based on Rule 65 of the 2010 PET rules.

“It would be seen in the report, that Marcos had no substantial recovery.  Still, we would follow — as we have always done — and respect the order of the Supreme Court,” she added.

Marcos, who ran against Robredo in the 2016 national elections, lodged a protest in 2016 after claiming that he was the victim of cheating.  Robredo won over Marcos by a margin of 280,000 votes.

Previously, Robredo’s lawyer Romulo Macalintal filed a motion asking PET to release the initial recount results to avoid speculations and rumors.  He also urged SC to stand by their rules — specifically Rule 65 of the 2010 PET rules.

Macalintal claims that according to the specific rule, poll protests should be dismissed once the protestant fail to recover a substantial number of votes in the three pilot provinces. /jpv