Gordon agrees with Magalong: Lives of 13 Pampanga cops in danger 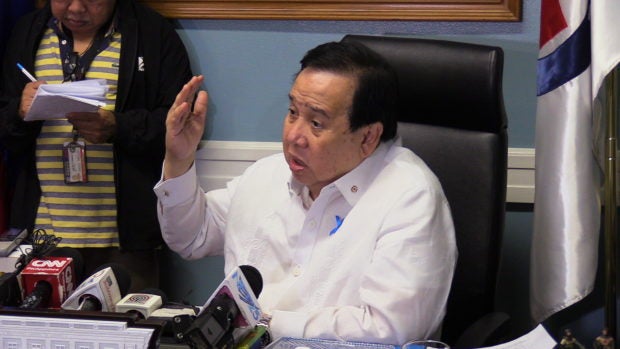 MANILA, Philippines — Senator Richard Gordon on Tuesday agreed with former police official now Baguio City Mayor Benjamin Magalong about the safety of policemen involved in the controversial Pampanga drug sting in 2013, saying their lives could now be in danger, adding that the “real criminals would not just sit by” following the exposé.

“There’s always a very important consideration when you have…the possibility of some of these people coming out of the forefront because they’re really facing very serious [charges] and that could lead to life imprisonment,” Gordon said in an interview with ABS-CBN News Channel.

READ: Magalong warns: Lives of Pampanga ‘ninja cops’ could be in danger

Gordon, as chair of the Senate blue ribbon and justice committees, is leading the investigation into the “ninja cops” controversy where the questionable drug operation was brought up.

In 2014, the 13 Pampanga policemen were charged for allegedly pilfering millions worth of illegal drugs following a buy-bust operation in 2013.

Magalong said in an earlier television interview there’s a risk for these policemen ending up dead “like the other civilian agents also involved” in the said drug operation.

“Whoever perpetrated this is in danger of any new testimony that would really lock up the situation, certainly Benjie Magalong…he knows that they have to be protected,” Gordon went on.

It was Magalong, a former chief of the Criminal Investigation and Detection Group (CIDG), who earlier told the senators that high-ranking police officials are involved in the recycling of illegal drugs seize from legitimate anti-drug operations. /jpv

ADVERTISEMENT
Read Next
Marikina gov’t working with CHR to probe construction worker’s death
EDITORS' PICK
SM continues to send relief assistance to remote towns in Batangas
Museums ‘put to sleep,’ churches closed amid volcano’s unrest
Get exciting deals and discounts when you download the new McDonald’s App
Seventh judge assigned to handle De Lima case
PH preps for China virus: Question of when, not if
Beyond water service: Maynilad builds massive infrastructure projects to clean up Metro Manila waterways
MOST READ
Lacson on Duterte’s threat to end VFA over Bato’s canceled visa: Where is the connection?
Part of Aurora Boulevard in Cubao closed from Jan. 25 – Feb. 1
The humiliating experience that changed Nash’s perception of soldiers
Corruption worsens: PH falls 14 notches to 113th spot in global index 2019
Don't miss out on the latest news and information.