MANILA, Philippines — Philippine National Police (PNP) chief Gen. Oscar Albayalde was dragged into the Senate’s probe into the alleged “ninja cops” when a 2013 anti-drug operation under his watch was brought up in the hearing.

Albayalde’s name was mentioned by Baguio City Mayor Benjamin Magalong, who finally disclosed in an open public hearing of the Senate committee on justice on Tuesday his earlier testimony in an exclusive session conducted by the panel.

At that time, Magalong was head of the PNP’s Criminal Investigation and Detection Group (CIDG).

“During the executive session , I mentioned a particular incident, sometime on November 29, 2013 wherein intelligence officers of the Pampanga Provincial Police Office conducted an anti-drug operation in Lakeshore in Mexico, Pampanga. 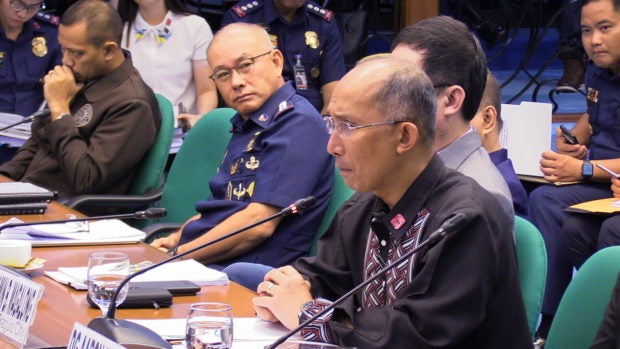 “During that time the provincial director was the incumbent chief PNP, General Oscar Albayalde,” he said.

The anti-drug operation supposedly yielded 38 kilograms of shabu and a “substantial” amount of cash. A high profile drug trafficker, a Chinese national identified as Johnson Lee, was also arrested.

But after conducting their own investigation, Magalong said the CIDG found out that the seized shabu was about 200 kilograms and not 38 kilograms.

The illegal drugs, he said, were stuffed in oversized luggage, which was carried by four persons.

“It only showed there’s no proper handling of evidence,” he added.

Magalong said they later heard that the price of illegal drugs in Pampanga suddenly dropped to P4M per kilo or just P4,000 per gram.

If the police only declared 38 kilograms of shabu, then he said 162 kilograms worth P648 million was unaccounted for.

Aside from the seized shabu, Magalong said the CIDG recovered P10 million in cash.

(They also released Johnson Lee and got another Chinese suspect)

Magalong named all the policemen involved in the operation led by Police Supt. Rodney Raymundo Louie Baloyo, who were later charged and ordered dismissed in 2014.

Instead of dismissing them, however, the police officers were only demoted in October 2017.

Albayalde was, meanwhile,  relieved from his post while the incident was being investigated. /muf