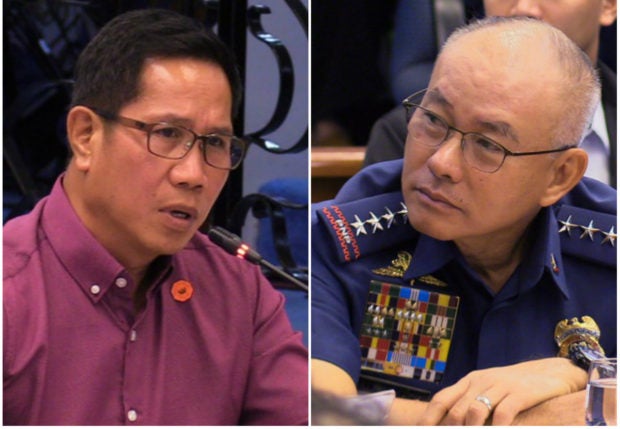 MANILA, Philippines — “I was shocked. I thought I was going to fall off my chair.”

Sen. Richard Gordon told reporters that this was his reaction to the revelation of retired Police Gen. Rudy Lacadin about Philippine National Police (PNP) chief Gen. Oscar Albayalde on Wednesday during the Senate hearing on the so-called ninja cops.

“What Rudy Lacadin revealed really had a lot of weight,” Gordon, speaking in Filipino, told reporters after the hearing conducted by the Senate justice committee, which he chairs.

During the hearing, Lacadin said Albayalde called him to ask about the investigation he was conducting on the November 2013 anti-illegal drug raid in Mexico, Pampanga.

Lacadin was then deputy director at the Criminal Investigation and Detection Group and  Albayalde was chief of the Pampanga Police Provincial Office.

It was 13 of Alabayalde’s men, led by Maj. Rodney Baloyo, who conducted the drug raid, after which part of the seized crystal meth, or shabu, went missing, allegedly sold for the benefit of the police officers.

According to Lacadin, Albayalde told him: “I only got a little [from that operation].”

Albayalde denied this, saying it was “highly unlikely” that he would say such a thing.

READ: Lacadin ‘has a lot of explaining to do’ – Albayalde

He pointed out that he gave Albayalde a lot of time to disprove the allegations against him.

“I gave him a lot of leeway, right?” Gordon said. “But so many people countered him. All the generals — Lacadin, and of course, General Magalong. It’s not a very, very secure place that he [Albayalde] has right now.” he added.

Gordon was Baguio City Mayor Magalong, who at the time of the Pampanga operation was chief of the Criminal Investigation and Detection Group (CIDG).

In an earlier hearing, Magalong said Albayalde intervened in the proposed dismissal of the 13 police officers involved in the drug sting.

The officers were charged for allegedly mishandling the evidence confiscated in the operation.

Albayalde denied intervening in the issue.

“It’s hard to dodge those statements,” Sotto, speaking partly in Filipino, said in a separate interview. “Plus, we can’t establish that Magalong and Lacadin are holding any grudges against Albayalde.”

Ask if he though Lacadin’s revelation was credible, the Senate leader said: “At face value. You know, it’s not easy to make an accusation without any basis.”

Sotto also noted that the allegations against Alabayalde could damage his credibility unless he could give a proper explanation.