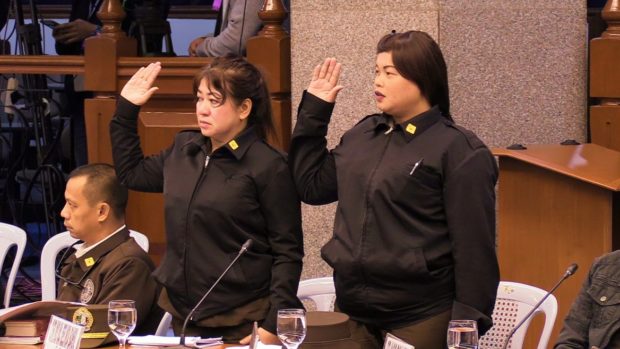 MANILA, Philippines — The Senate has ordered the release of two Bureau of Corrections (BuCor) officers earlier cited in contempt for lying about their involvement in the so-called “GCTA for sale” scheme at the national penitentiary.

During Wednesday’s hearing on the implementation of the Good Conduct Time Allowance law and on so-called “ninja cops,” panel chair Senator Richard Gordon said Bansil and Buño requested for their release on account that Buño’s child was missing. 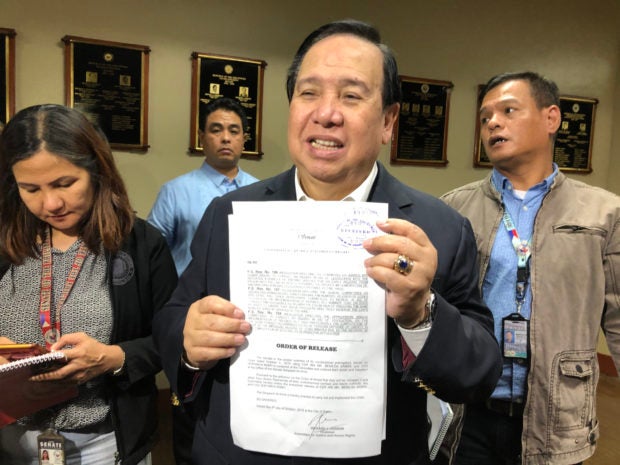 Senator Richard Gordon shows to members of the media the release order for Corrections Senior Insp. Mabel Bansil and Officer 3 Veronica Buño, following the Senate’s hearing on the implementation of the GCTA law on Wednesday, October 9, 2019. The two Bureau of Corrections officers were previously held in contempt for lying about their alleged role in the so-called “GCTA for sale” scheme at the national penitentiary. INQUIRER.net/Daphne Galvez

“I think there is basis for us to consider to move to lift the contempt order and release them from our custody,” Drilon said.

The Senate committee likewise ordered the Department of Justice (DOJ) to “pick up and follow-up” the case against the two Bucor officers, and newly-installed BuCor director-general Gerald Bantag to “make sure that they are safe.”

Bansil and Buño, however, were directed to attend the next Senate hearing on the GCTA law implementation. The two were earlier tagged in the facilitation of the alleged GCTA for sale scheme in the New Bilibid Prison and accused of receiving payments from inmates who want to secure an early release.

They were cited in contempt after the National Bureau of  Investigation presented findings on its digital forensic investigation, debunking the BuCor officers’ testimonies regarding their role on the GCTA for sale scheme. /kga