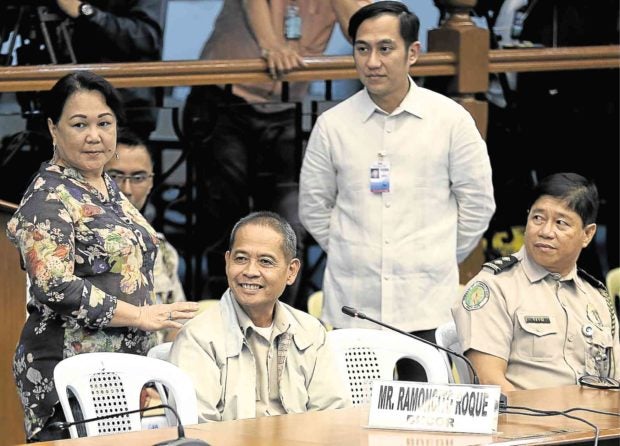 THAT’S HIM Yolanda Camilon (left) identifies Ramoncito Roque as the Bureau of Corrections documents officer who allegedly received part of the money she paid to secure the release of her husband, during a Senate hearing on Thursday on the good conduct time allowance system for the early release of convicts. —RICHARD A. REYES

The wife of an inmate at New Bilibid Prison (NBP) told senators and reporters separately that Bureau of Corrections (BuCor) officers were offering to release convicts on good behavior for a fee.

Yolanda Camilon testified at the late Thursday night Senate inquiry on the good conduct law, or Republic Act No. 10592, that she paid P50,000 for the early release of her common-law husband who still hasn’t been freed.

At a press conference on Friday, Camilon told reporters the amounts paid by other convicts’ families ranged from P30,000 to more than P1 million.

“Some paid millions, P1.5 million,” she said. “This is my own opinion, my own observation. But our Bilibid here in the Philippines has already become a business.”

She told reporters her husband was serving a maximum four-year prison term, but BuCor officers told her he could be released as early as March 1 on good conduct for a fee.

She said she paid P50,000 as agreed but he wasn’t freed that month. Then the schedule was moved to June and finally the BuCor officers promised he would be released in October.

Camilon told senators she lost patience and asked her money be returned. She also decided to testify after the controversy over the good conduct time allowance (GCTA) law erupted following the aborted release of rape-slay convict Antonio Sanchez, a former mayor of Calauan, Laguna province.

“I said this is probably the time for me to tell all because I myself was victimized by that GCTA,” she said.

Sacked BuCor chief Nicanor Faeldon, who was at the hearing, said it was the first time he has heard of the scheme and it saddened him.

He said the scheme was worse than heinous crimes because it victimized prisoners, the lowest members of society.

Camilon said she gave two payments of P20,000 each to Corrections Senior Insp. Mabel Bansil, who introduced her to documents section chief Corrections Staff Sgt. Ramoncito Roque to whom she gave P10,000 at his residence.

Camilon said Bansil told her she gave Roque the P40,000 she had received.

Roque, who was at the hearing, admitted meeting Camilon at his house when she came with Bansil but told the senators he first declined to receive an envelope with the money from Camilon because that might get him in trouble.

“She insisted and I thought it was just some form of assistance,” he said.

A few days later, he decided to return the money, telling Camilon and her partner it was prohibited.

Camilon said she never got her money back.

She said Roque introduced her to Ruperto Traya Jr., a BuCor chief administrative officer who was gunned down late last month.

Traya printed her common-law husband’s prison record which showed that he would be released on April 19, 2021, but because of the GCTA he could be freed on Oct. 13.

Roque said he was not the one who credited GCTA to convicts, but the computations of the amount of time that could be shaved off a prison term pass through him and he could ultimately decide if a certain time credit should be included or not.

Sen. Richard Gordon, who chaired the hearing, said Roque had a lot of power and had the opportunity to pressure inmates.

“You hold the computers, you hold everything. You are like the son of God and can say, ‘We need to have an agreement, and if you don’t agree, I can make things difficult for you.’ That is in your power,” Gordon said.

Inmates are hardly in a position to complain because they remain under the full control of the BuCor officials, Gordon said.

“I really took great care with her. I did not want to be misled or taken for a ride,” Gordon said.

Sen. Panfilo Lacson said “at least eight [convicts] are known to have paid up to P100,000 each” under the scheme to get released early under the GCTA.

“GCTA for sale: So far, we have discovered and will pursue to validate, gather evidence as well, a price range of P50,000 to P1.5 million per prisoner,” he said on Twitter. “It is also well organized. Let’s see where it leads us.”

At her Friday press conference, Camilon said that aside from the GCTA scheme, some BuCor officers also were allegedly making money by adding cases to an inmate’s record and offering to remove them for a fee, according to Camilon, quoting other inmates’ families who called it “laglag pending case.”

She said the scheme was already existing but got worse in recent months with the release of Chinese nationals convicted of heinous crimes, and the botched release of Sanchez.

Camilon said her husband and others in the minimum security compound of NBP were qualified for early release under GCTA, but she wondered why those in maximum security were the ones walking free.

“They only get one or two people from the minimum,” Camilon said. “We know that there are payoffs like this. But how about the others who don’t have the capacity to pay, even if we say that they are qualified to go home to their families?”

She said she decided to speak out after she heard about Sanchez’s imminent release.

Camilon said she never had any interaction with Faeldon.

“I was a victim even before he came to the BuCor. So it means this scheme was already present then,” she said.

Camilon said she wanted those involved in the scheme—particularly those who refused to return her money—to be removed from government and held accountable.

She admitted that she fears for her safety but stressed that speaking up was needed to end the nefarious practice.

“You can’t remove the fear. But for me, I want to end it, put a closure to it … If there’s no one else like me, how can we let the President know about this?” Camilon asked.

“I have my fears. But my guard is up there, because He knows what I am telling you. Maybe He was the one who prodded me,” she said.