(Editor’s Note: The identities and assignments of the soldiers in this report are kept vague in order to protect their privacy. –Ed.) 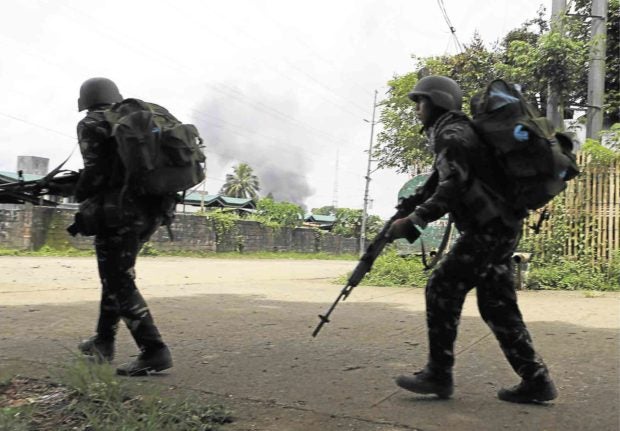 MARAWI NIGHTMARES The Army General Hospital recorded “between 10 and 12 clear-cut cases” of Army soldiers with PTSD after the five-month battle to regain Marawi City from Maute fighters in 2017. –INQUIRER FILE PHOTO

Soldier X decided to play dead when the Abu Sayyaf bandits reached the area where he and several other members of the Philippine Army lay wounded by enemy fire.

Motionless on the ground, he sensed that his buddy next to him had drawn the attention of the bandits. Behead him first, he heard someone ordering the others.

As the bandits prepared for the execution, his buddy’s screams forced Soldier X to take a peek. His buddy was looking at him and begging for his help: “Bok, tulungan mo ako!”

“He was killed beside me,” Soldier X later told Maj. Christine de Jesus, chief of the neuropsychiatric service of the Army General Hospital (AGH). “I didn’t know what to do. I was next, so I played dead.”

According to De Jesus, Soldier X’s postencounter condition showed classic symptoms of a person with PTSD, or post-traumatic stress disorder.

There were nightmares about the incident. Flashbacks occurred at any time of the day.

“In his dreams, Soldier X would hear his buddy’s voice, asking for help,” De Jesus said. “He refused to confide in anyone, thinking it was an unmanly thing to do. Eventually he resorted to alcohol, palakas nang palakas ang inom, cigarette smoking, and although I am not saying this is justified, there really are instances when sufferers resort to womanizing—those risk-taking behaviors that we classify as negative coping.”

“I wanted to forget” was how Soldier X explained it.

Only the threat of running out of funds after paying huge fees to a private psychologist forced him to turn to AGH. By then, his family had endured the effects of his undisclosed trauma for five years. 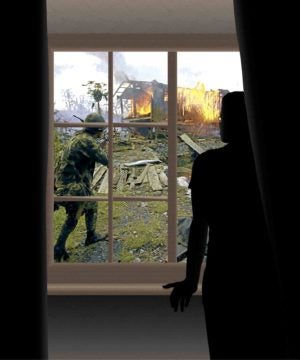 PTSD is a chronic condition that occurs when a person who has experienced or witnessed a traumatic event is unable to recover from the resulting distress. In the fifth edition of the Diagnostic and Statistical Manual of Mental Disorders (or DSM-5) used by the American Psychiatric Association, PTSD is considered if symptoms last more than a month.

The condition renders a person isolated and disempowered. And it could get worse if left untreated.

The Armed Forces of the Philippines acknowledges PTSD among soldiers, especially those who have survived brutal encounters with groups like the Abu Sayyaf in Mindanao.

For years now, the military has held stress debriefing programs for soldiers in an effort to reduce the risk of PTSD. The condition, while avoidable if detected early, can occur as long as soldiers are sent to combat zones.

De Jesus said AGH recorded “between 10 and 12 clear-cut cases” of Army soldiers with PTSD after the five-month battle to regain Marawi City from Maute fighters in 2017. (More than 1,000 military men were wounded and 165 soldiers from the AFP’s various units were killed at that time.)

All Army personnel diagnosed with PTSD are referred immediately to V. Luna General Hospital, she said.

De Jesus had her residency training as a psychiatrist at V. Luna from 2007 to 2014. Army soldiers comprise the biggest number of PTSD patients there, she said.

“The Army has 86,000 soldiers. Of all Army men confined [in V. Luna] now, only a handful are PTSD cases, followed by those from the Air Force and the Navy. This is because those from the Army are the first to be sent to battle,” she said.

Maj. Jose Lorenzo P. Rollo MC, a psychiatrist at V. Luna, said the hospital admitted 23 soldiers for PTSD at the height of the Marawi crisis.

“Out of the thousands of soldiers sent to battle, less than 10 percent of those who fought there came back with PTSD,” he said.

Clinical psychologist Ma. Lourdes Carandang of the privately funded Mindfulness, Love And Compassion Institute for Psychosocial Services Inc. (MLAC) headed a team of psychologists invited by a nonprofit group to assist in the debriefing of soldiers who fought in Marawi.

“PTSD is a scientific label,” Carandang said. “In earlier times, they called it shell shock to refer to those who suffered trauma during the two world wars, also during the Vietnam War.”

Rollo said PTSD was also given “other names, like ‘Soldier’s Heart’ and ‘battle stress fatigue.’”

“The terms used have evolved. The current name, PTSD, was the term used [by the American Psychiatric Association] when I started here in V. Luna,” he said.

While it is the soldiers who are afflicted with PTSD, those who are constantly with them, such as family members, are often the ones who have to deal with its effects, Carandang noted.

The symptoms commonly observed among PTSD sufferers include hypervigilance—when the person is always ultrasensitive and on guard. Flashbacks, nightmares and uninvited mental images of the traumatic event are another red flag.

The soldiers debriefed by the MLAC team group after the Marawi siege constantly saw images of mosques and other buildings destroyed during battle.

Said Carandang: “Seeing Marawi in ruins was already traumatizing. Imagine taking part in destroying it. That is very disturbing. Their stories were about flashbacks of destroyed buildings. Eh, sacred place pa. Even if they were not Muslim, they knew they were violating the mosques’ sacredness. The words that always arose during the debriefings were ‘sacred’ and ‘beautiful city.’”

Carandang led another team of MLAC psychologists that helped debrief soldiers in another military operation in Mindanao in 2013.

She refused to offer details other than that the soldiers could not sleep because of recurring nightmares of children running away in fright as they fired their guns.

Some soldiers asked her if they were “going crazy, because the images always came back,” she said. “They cannot prevent it.”

AGH’s De Jesus cited the startled reflex in describing a soldier surprised by a sudden noise like the sound of fireworks and hiding under a table.

Rollo said he saw this reaction among soldiers who were being treated at V. Luna on New Year’s Eve just a little over two months after the Marawi crisis ended: “Residents just outside the hospital were celebrating with fireworks. The patients had flashbacks and hid under their beds. I witnessed it. Nurses also reported seeing patients cowering under their beds. Later that night, some soldiers said they had nightmares. They dreamt about Marawi. Many said they thought they would die.”

Patients with advanced PTSD become paranoid and experience tremors while telling their stories. One soldier, De Jesus recalled, could not let go of his gun and had to be disarmed by hospital personnel.

Social withdrawal is not a surprising consequence, she added.

Carandang mentioned “constriction” as another symptom: when the sufferer goes numb or avoids places, topics and even forms of media that remind him of his experience.

De Jesus recalled a patient who avoided people in red “because members of the New People’s Army wear that color.”

The case of soldiers with PTSD is considered more complicated than that of other trauma victims “because they obeyed a command that may be against their inner values…” Carandang said. “You don’t want to kill but you’re supposed to. That’s violating your inner core.”

In the case of the Marawi fighters, the MLAC psychologists had to coax them to acknowledge the guilt they felt afterward, she said, adding: 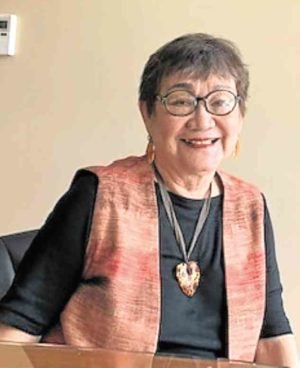 “Seeing Marawi in ruins was already traumatizing . . . Their stories were about flashbacks of destroyed buildings . . . Even if they were not Muslim, they knew they were violating the mosques’ sacredness”
Ma. Lourdes Carandang
Clinical Psychologist

“They could not even mention the word ‘guilt.’ We were the ones who had to ask. Maybe they were unaware, or maybe too traumatized, and they could not spell it out. Looking at the city, seeing it in ruins, was traumatizing already. Imagine taking part in destroying it.”

Carandang warned of the dangers of undiagnosed PTSD, “especially if the [patient] exercises power as an authority. He can victimize people without knowing. It can lead to many, many consequences. They can be violent toward others, be always angry, have uncontrolled outbursts, and they don’t know why they are doing these.”

She said there were instances when the man became abusive to his spouse, “unaware it is all because of the trauma that remains unhealed.”

De Jesus used the phrase “macho image” to explain why many PTSD sufferers refused to consult with military health professionals.

“Once they are admitted to a psychiatric facility [in the military], their condition is recorded in a system of profiles ranging from P1 to P4,” she said.

A soldier who earns a P3 category is automatically taken out of the war zone and admitted to a hospital, De Jesus said without elaborating. Full recovery means the soldier has earned a P1 category and is allowed to return to the field.

Occasionally, when a soldier is returned to his unit, he has to contend with ribbing that he was once confined in the ward for PTSD patients, De Jesus observed. Also, the P3 classification, even if it no longer applies, stays recorded in his files.

Rather than endure that experience, some combatants like Soldier X choose to see private practitioners, De Jesus said.

“But all of this is beginning to change,” said AGH’s lone psychiatrist. “The Army, for example, has begun programs that would allow soldiers to detect the symptoms in themselves and in their friends. We have a buddy system where soldiers check on each other as a first aid measure.”