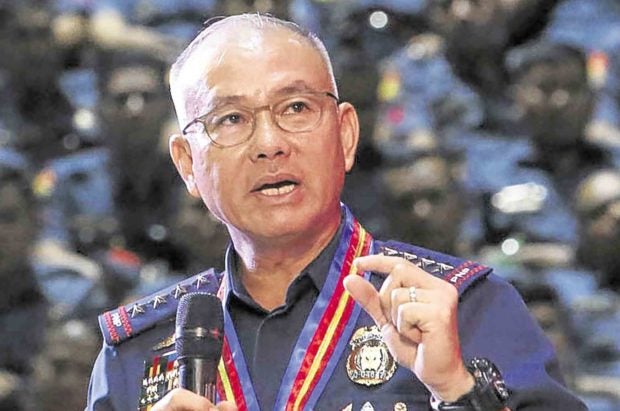 Albayalde, who is retiring next month, has found himself at the center of the scandal after high-profile witnesses testified that he mishandled a questionable drug raid by officers under his command when he was police director of Pampanga province in 2013 and that he intervened to save them from dismissal.

President Rodrigo Duterte last week said he would wait for the report of the Senate justice and human rights committee, which Gordon chairs, on its investigation of the ninja cops before deciding whether to fire Albayalde.

“Ninja cops” is a police term that refers to officers who pilfer and trade illegal drugs that they have seized during antinarcotics operations.

“I think we have enough information for [the President] to make a decision,” Gordon told reporters in a phone interview on Monday.

“But then I still would like for Albayalde to come forward and answer questions that need to be answered. We will not make a conclusion without him answering [those questions],” he said.

“I know our investigation has been public and the people have heard it. We have nothing to hide. I think it’s a very good investigation,” he added.

Baguio City Mayor Benjamin Magalong, who investigated the November 2013 drug raid in Pampanga as director of police criminal investigation, testified that Albayalde intervened in behalf of his former subordinates who were accused of selling 162 kilos of “shabu” (crystal meth) that they seized during the operation.

Gordon’s committee on Thursday ordered Maj. Rodney Baloyo, who headed the operation as Albayalde’s chief intelligence officer in Pampanga, detained at New Bilibid Prison for lying to the inquiry and giving evasive answers to the senators’ questions.

The Department of Justice is reviewing the case filed by the PNP Criminal Investigation and Detection Group against Baloyo and 12 other policemen over the Pampanga drug raid.

Justice Secretary Menardo Guevarra on Monday formed a three-member panel of prosecutors to review the case and receive additional evidence.

Guevarra gave the panel 30 days to complete the review.

Gordon said the Office of the Ombudsman should also take note that several retired and active senior police officials were mentioned in the past eight hearings of his committee.

“Everything [was said] under oath. I think the Ombudsman should consider those so that cases could be filed against those who should be held liable,” he said.

Asked what charges could be brought against Albayalde, Gordon said: “Negligence and possible knowledge of the offense [committed].”

Albayalde on Monday maintained that he was open to any investigation.

He also ordered the “temporary” return of Philippine Drug Enforcement Agency chief Aaron Aquino’s 15 police bodyguards apparently to prove that there was no animosity between them.

Aquino testified in the Senate that Albayalde had phoned him to ask that he stop the implementation of an order to dismiss Baloyo and the 12 other policemen involved in the Pampanga drug raid.

In a speech at the Philippine Safety College, Albayalde thanked President Duterte and Interior Secretary Eduardo Año, the police overseer, for giving him the opportunity to be heard in an investigation.

“With their assurance of impartiality and due process, I am ready to face investigation to once and for all clear my name and spare the PNP from further embarrassment and unwanted public opinion created by these internal and external political machinations,” Albayalde said.

Bayan Muna Rep. Carlos Zarate called on “honest and patriotic” policemen to come out and disclose what they know about the ninja cop racket.

Zarate said in a statement on Monday that he was worried about a cover-up.

“For our country and children’s sake, come out and blow the whistle on these corrupt and criminal cops. It is the only way to prevent a whitewash that seems to be now in the offing,” Zarate said.

He questioned Año’s parallel investigation of the rogue officers’ operations, which was begun without waiting for the results of the Senate inquiry.

“Apparently, some quarters are now panicking and on a damage control mode to try to divert, even cover up, this issue,” Zarate said. —With reports from Jeannette I. Andrade, Tina G. Santos and Leila B. Salaverria