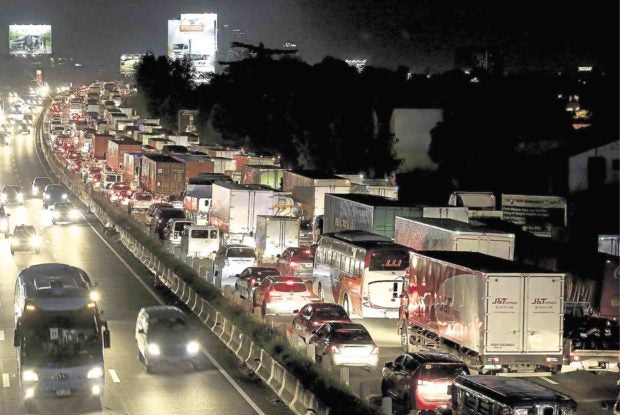 SUPERGRIDLOCK Heavy vehicular traffic stretching to 24 kilometers hounded motorists on the night of Sept. 26 on the South Luzon Expressway, from Alabang to the Eton exit in Sta. Rosa City in Laguna province. —RICHARD A. REYES

Sen. Sherwin Gatchalian on Monday made the suggestion to the Toll Regulatory Board (TRB) amid the daily traffic gridlock along the northbound portion of SLEx, the main artery connecting Metro Manila to Calabarzon.

The “carmageddon” has been caused by the closure starting Sept. 24 of the outermost lane of SLEx’s at-grade level just after the Alabang exit in Muntinlupa to give way to the P10-billion, 6-kilometer extension of Skyway in Metro Manila’s southernmost city.

The partial road closure has inconvenienced hundreds of thousands of Metro Manila-bound commuters and motorists, who took to social media their complaints about their nightmarish travel.

On Sept. 26, for instance, vehicular traffic backed up from Alabang to the Eton exit in Santa Rosa City, Laguna — a distance of 24 km.

Echoing the sentiments of Sen. Grace Poe, Gatchalian said the TRB could also order the operator of SLEx, San Miguel Corp. Tollways, to lower the toll to help ease the burden of affected motorists and commuters.

He pointed out that vehicle owners were paying for the use of the toll road to make their travel faster and more convenient.

“To provide relief to those affected, I do recommend to slash or suspend the toll rates since they (toll operator) are causing the inconvenience because of their construction activities,” Gatchalian told reporters.

As a state regulator, he said the TRB could on its own call for public hearings to discuss the possibility of a toll holiday.

He, however, said that any proposed adjustment in toll rates should be justified based on the complaint of motorists.

“[The TRB] should call for a hearing and then analyze how to provide relief to our motorists. I think that’s within the powers of TRB,” Gatchalian said.

Last week, Poe asked TRB officials and the Department of Transportation during a Senate hearing to do something about the traffic problem on SLEx after personally receiving complaints from affected motorists.

She also told them to look into the possibility of reducing the toll during the construction of the Skyway’s extension from Barangay Cupang to Susana Heights in Barangay Tunasan, both in Muntinlupa.

“Motorists deserve to pay less for the trouble the gridlock is causing due to the extension project,” Poe said.

“With the procession-like flow of traffic, is it wrong to reduce toll fees for motorists?” she asked.