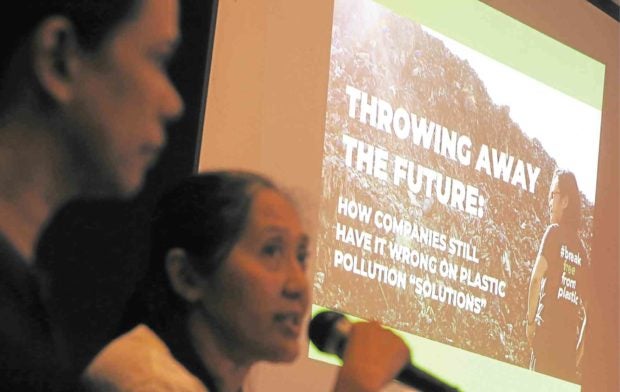 REUSE AND REFILL Environmentalists call on companies to shift to business practices that enable consumers to adopt reuse and refill methods instead of peddling false solutions to cover up reliance on single-use plastic in Monday’s press briefing in Quezon City. —NIÑO JESUS ORBETA

Switching to paper packaging and so-called bioplastics by companies producing consumer goods has turned out to be one of many “false solutions” to the immense problem of plastic pollution, according to an international environmental group.

At the launching of its report titled “Throwing Away the Future: How Companies Still Have It Wrong on Plastic Pollution Solutions” in Quezon City on Monday, Greenpeace challenged multinational companies to go beyond business as usual, and instead shift to practices that would enable reuse and refill methods.

“All these well-meaning initiatives will hardly make a dent in the whole problem … as long as the production of plastic is not drastically reduced,” said Abigail Aguilar, campaign coordinator for Greenpeace Southeast Asia.

“[The companies’] commitments and declarations are all focused on false solutions that only continue to perpetuate a throwaway culture,” she added.

Their report showed that the shift to other forms of packaging only compounds the persisting problem of waste and environmental degradation.

The switch to paper, it said, can lead to deforestation with the growing demand for pulp, while bioplastics — which are touted as biodegradable or compostable — do not naturally decompose in nature and would require “industrial-level facilities” to actually break down.

The report also assailed the idea that recycling is the best way to keep plastics out of landfills.

“Recycling systems cannot keep up with the huge volume of plastic waste generated,” it said. “Numerous exposes have demonstrated that recycling systems have failed to deliver on the promise to both recover enough material to reduce demand for virgin plastic or to ensure proper disposal … due to inherent difficult[ies] posed by the nature of plastics, the mixtures of plastics and the enormous amount produced.”

Along with green groups Break Free From Plastic and Ecowaste Coalition, Greenpeace called for the massive reduction of plastic production and investments in innovative alternative delivery systems.

“Some cannot afford bulk packaging, so they would have to buy materials that come in [smaller] packaging,” said Beau Baconguis, Asia-Pacific coordinator for Break Free From Plastic. “If there are no alternative systems in the community, they will end up buying the sachets.”

Earlier this year, a report released by Global Alliance for Incinerator Alternatives showed that Filipinos use a staggering 164 million sachets daily, nearly double the use of plastic shopping bags and thin-film bags combined at 48 million and 42 million, respectively.

In 2018, an estimated 855 billion sachets were sold globally, with Southeast Asia accounting for nearly half of the market.

The groups said the thinking that impoverished consumers have contributed to a “sachet economy” by not disposing plastic waste properly must be challenged.

“A lot of times, we don’t have a choice in terms of packaging… especially in poor communities,” Baconguis said.

Law vs plastic use

Among the alternative delivery systems that can be reintroduced in shops and markets is the traditional “tingi” system, where refilling containers of goods was the norm, they said.

“These are the systems that we need to bring back … This is already in our culture,” Baconguis said.

While these groups say they will continue to demand accountability from multinational companies responsible for continuous plastic production, they also urged Congress to enact a law that would ban the use and production of single-use plastics nationwide.

At present, only ordinances in cities and municipalities that regulate or ban plastic use are in place.

Several bills have already been filed in Congress imposing such a ban, but these have yet to be acted on.

“There are plenty of local ordinances, but [without] a national law, you’re just like squeezing a balloon,” Baconguis said. “If there is a law in one place and none in the other, then you are just moving the problem from one place to another.”