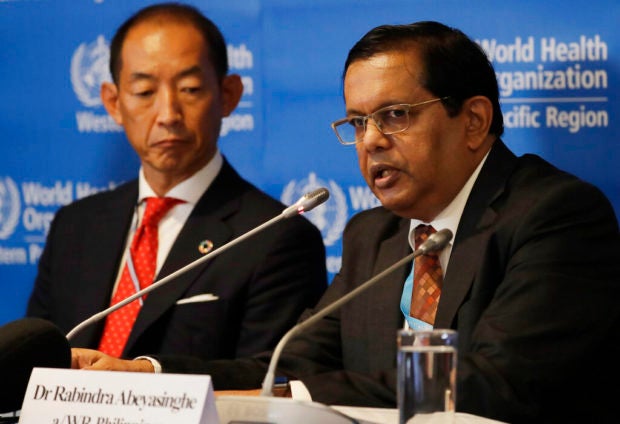 World Health Organization Regional Director for Western Pacific Dr. Takeshi Kasai, left, listens as WHO Representative in the Philippines Dr. Rabindra Abeyasinghe addresses the media at the start of the five-day annual session Monday, Oct. 7, 2019, in Manila, Philippines. The meeting comes at a time “as the region continues to fight infectious diseases like dengue and malaria, among others, and to better respond to disasters and emergencies that affect the nearly 1.9 billion people of the Western Pacific Region.” (AP Photo/Bullit Marquez)

MANILA, Philippines — The World Health Organization (WHO) said on Monday that the measles and polio outbreaks in the Philippines were triggered not only by the parents’ refusal to have their children vaccinated but also by the country’s “logistical challenges” that made it difficult for the public to gain access to vaccines.

“The situation in the Philippines is complex because it’s not only vaccine hesitancy. [There are] logistical challenges, limited stockouts [that are] happening frequently in many health facilities,” WHO country representative Rabindra Abeyasinghe told reporters on the sidelines of the five-day 70th Session of the WHO Regional Committee for the Western Pacific.

“Even when there is no vaccine hesitancy, there are challenges in accessing vaccines, [that’s why] children remain unprotected,” he added.

He said WHO had also noticed “inadequacy of staff” in some health centers.

While these problems cut across sectors, the impact is more pronounced in poor communities as relatively well-off areas “can find alternatives,” Abeyasinghe said.

By WHO estimates, there are around 750,000 children who remain unvaccinated.

Since 2014, vaccination rates across the country have been waning, according to the Department of Health (DOH).

Over the course of five years, the immunization rate for polio ranged from a high of 75 percent in 2015 to a low of 66 percent last year.

In the same period, measles coverage peaked at 79 percent in 2015 and dropped to 67 percent last year.

For a community to achieve herd immunity and prevent an outbreak of any of the vaccine-preventable diseases, the coverage rate should be 95 percent.

“You have a big country to work with, a large population of infants you need to cover and yet the technical capacity is down to two persons at the central level. At the regional office, you only have one medical officer and a nurse coordinator/cold-chain manager,” Calibo said.

In neighboring Vietnam, Cambodia and Laos, the national immunization programs have at least 40 experts in the central office alone, he said.

To close the gaps in the country’s vaccination efforts, Calibo said the DOH had requested the creation of an immunization unit.

Unfortunately, the Department of Budget and Management disapproved the proposal. Similarly, the Research Institute for Tropical Medicine (RITM) suffered a budget cut of P80 million for its laboratory surveillance.

It was RITM’s surveillance that helped detect the presence of vaccine-derived poliovirus in Manila and Davao.

Senators have said that the immunization unit proposal would be considered and RITM’s P198-million budget for 2020 would be restored, on top of possibly adding another P50 million for the center to expand its surveillance.