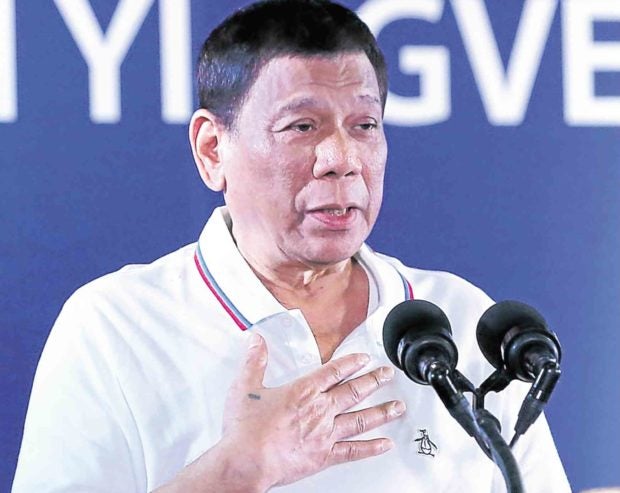 MANILA, Philippines — President Rodrigo Duterte is “OK and well,” Malacañang said on Monday, despite the 74-year-old leader’s admission that he suffers from an autoimmune disease that can potentially have serious complications.

He’s the oldest politician to be elected President of the Philippines, and questions about his health have swirled since he took office in 2016.

His occasional skipping of events and meetings, as well as him discussing his ailments, has only added to the speculation.

At a meeting with Filipino expatriates in Moscow on Saturday, his last official event on a five-day visit to Russia, the President disclosed that he had been suffering from myasthenia gravis, which causes one of his eyelids to droop.

“One of my eyes is smaller. It roams on its own,” he said, according to a transcript released by the Office of the President on Sunday.

“That’s myasthenia gravis. It’s a nerve malfunction. I got it from my grandfather,” he said.

The condition causes muscle weakness, and can result in drooping eyelids, blurred vision as well as weakness in one’s extremities, according to the US National Institute of Health.

It can generally be managed with treatment, but up to 20 percent of people who have the disease experience at least one “crisis” that requires them to use a ventilator to help breathe, the institute said.

The President gave no indication as to whether he had any serious incidents as a result of the disease.

Malacañang gives out very little information about the President’s health and consistently says he is in good shape.

At a press briefing in the Palace on Monday, presidential spokesperson Salvador Panelo said that, although he did not know anything about the new illness, the President was “probably OK.”

“What he complained about was he wasn’t able to sleep during the flight … But he was well, when he met the reporters. He was up and about,” Panelo said.

Health Secretary Francisco Duque III on Monday said that although he was not privy to the President’s latest ailment, the condition would not affect his performance in office.

Duque said a lot of who had been diagnosed with myasthenia gravis continued “to live normal lives.”

“There’s a medicine for it. It will not affect his performance as long as he is monitored by a doctor,” Duque said.

After landing in Davao City on Sunday afternoon, the President told reporters that he came down with a “very bad case of cold” due to the chilly weather in Russia.

Photos of the President in Russia showed him wearing thick coats to keep himself warm.

He admitted that he had difficulty getting sleep on the flight home.

The President also experienced muffled hearing, prompting reporters to repeat their questions to him.

The President himself has discussed his ailments in his frequent speeches. In October 2018, he told an audience how he was awaiting the results of a cancer screening.

His comments sparked immediate concern and speculation, but days later, he said the test had come back negative.

The President also said previously that he was suffering from daily migraines and ailments including Buerger’s disease, an illness that affects the veins and the arteries of the limbs, and is usually due to smoking.

He has cited his ill health as the reason for skipping events during summits abroad.

In 2016, the President disclosed that he used to take fentanyl, a powerful painkiller, because of a spinal injury from motorcycle accidents. —Reports from AFP, Jovic Yee and Julie M. Aurelio