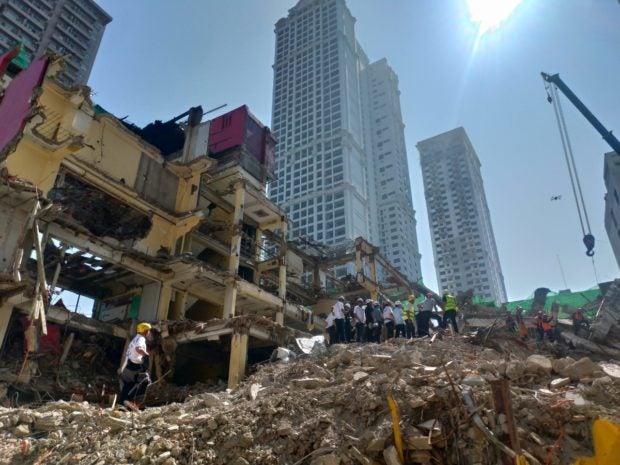 MANILA, Philippine — The local government of Manila is looking into the possible liability of Sogo hotel in Malate, which collapsed and killed two construction workers on Monday.

Manila Mayor Isko Moreno also said he would task the city engineering to probe if the demolition contractor may also be held responsible for the deadly incident.

“For the meantime, we don’t want to accuse anybody until may makita kaming pagkukulang sa part ng Sogo marahil, or contractor ng demolition marahil. But the documents are with the city engineering already and nirerebisa na kanina pang umaga,” Moreno said in an interview.

(For the meantime, we don’t want to accuse anybody until we see any failing on the part of Sogo perhaps or the demolition contractor perhaps. But the documents are with the city engineering already and are being reviewed since this morning.)

The Sogo Hotel located in Malate, Manila collapsed at 9:30 a.m. Monday. It is undergoing demolition, which is being handled by Fabellon Construction, at the time of the incident.

Killed on the spot was construction workers Melo Ison and Jeremie Fabello.

Another construction worker Edson Ison was also injured from the incident. He is now in stable condition, according to the mayor.

READ: 2 dead after collapse of budget hotel in Malate