2 dead after collapse of budget hotel in Malate 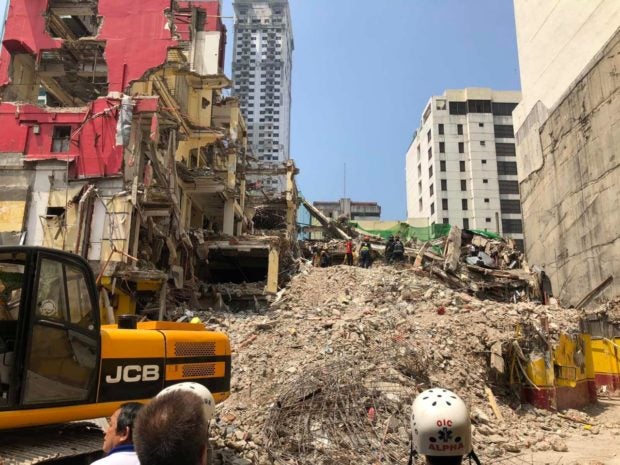 MANILA, Philippines — Two were confirmed dead after a portion of a budget hotel collapsed on Monday morning.

After nearly 6 hours since a Sogo branch in Malate, Manila collapsed, authorities finally recovered the body of Melo Ison.

According to Manila Mayor Isko Moreno, rescuers managed to find the body of Ison around 3 p.m. “without pulse” beneath the debris.

The body of Ison was immediately brought to Ospital ng Maynila following its recovery.

Meanwhile, retrieval operations for Jeremie Fabello, the other person that got trapped inside the collapsed building, is still ongoing.

“Nalulungkot tayo sa ganitong uri ng aksidente but for now I think the least thing that we can do is to address the family,” Moreno said in an interview.

“We are very sorry to the family. Nakikiramay po kami, ang Lungsod ng Maynila,” he added.

Sogo Hotel, which was under demolition, collapsed around 9:30 a.m. /je