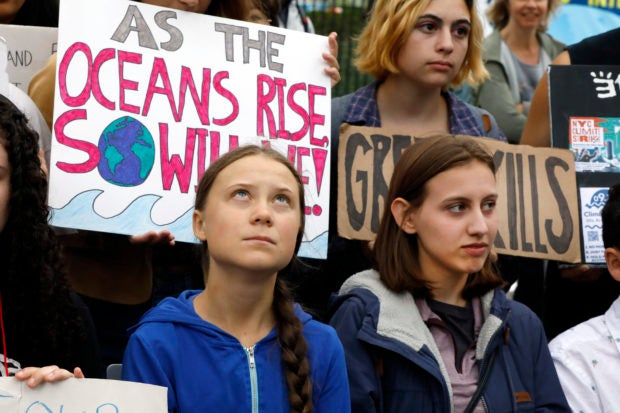 Dubbed the “Fridays for Future” movement, the campaign wants children around the world to take a more active role in persuading adults to treat climate change more seriously.

Organizers say schools from nearly every country in the world have committed to taking part in the rallies, which are timed to spotlight a UN summit on zero emissions on in New York on September 23.

Teen activist Thunberg, with her distinctive pigtail, has become a poster child for a new impetus in the climate change movement, and she took her message to the US Congress earlier this week to implore the nation’s lawmakers to “take real action” to avert environmental disaster.

The 16-year-old was joined by other campaigners who said looming uncertainty caused by inaction over climate change has led younger generations to question the intentions of today’s political leaders.

Thunberg arrived last week in Washington, where she has maintained a busy schedule: demonstrating in front of the White House, meeting indigenous leaders from South America and gathering on the US Supreme Court steps with children suing the government for climate inaction.

Earlier she sat down with former president Barack Obama, and also received an Amnesty International award.

“Fridays for Future” events will kick off in Australia, where tens of thousands of people are expected to rally in Sydney, Melbourne and dozens of cities and towns across the country.

The events carry extra weight on the mostly hot and dusty continent, which finds itself at the sharp end of climate politics.

Australia is one of the world’s largest coal exporters and continues to approve massive new mines, but it has also suffered the compounding effects of climate change.

The issue is highly politically charged and the conservative government — while stopping short of outright climate change denial — has sought to frame the debate as a choice between jobs or abstract CO2 targets.

Ruling coalition parliamentarian Craig Kelly on Thursday warned children that “everything you’re told is a lie”.

“The facts are, there is no link between climate change and drought, polar bears are increasing in number,” he said.

While some local authorities, businesses, schools and unions have encouraged people to take part in the strikes, some have warned that absences must be explained.

“I’m not going to sit back while our playgrounds turn into dust-bowls, our drinking water dries up and our homes are under threat from a wild fire storm,” said Marlie Thomas, a high school student who is expected to speak at the event in Sydney.

The global rallies will culminate in New York where authorities have given their blessings to the one million children in over 1,700 schools in the US financial capital to skip lessons for the event.

Thunberg will lead that demonstration. /gsg