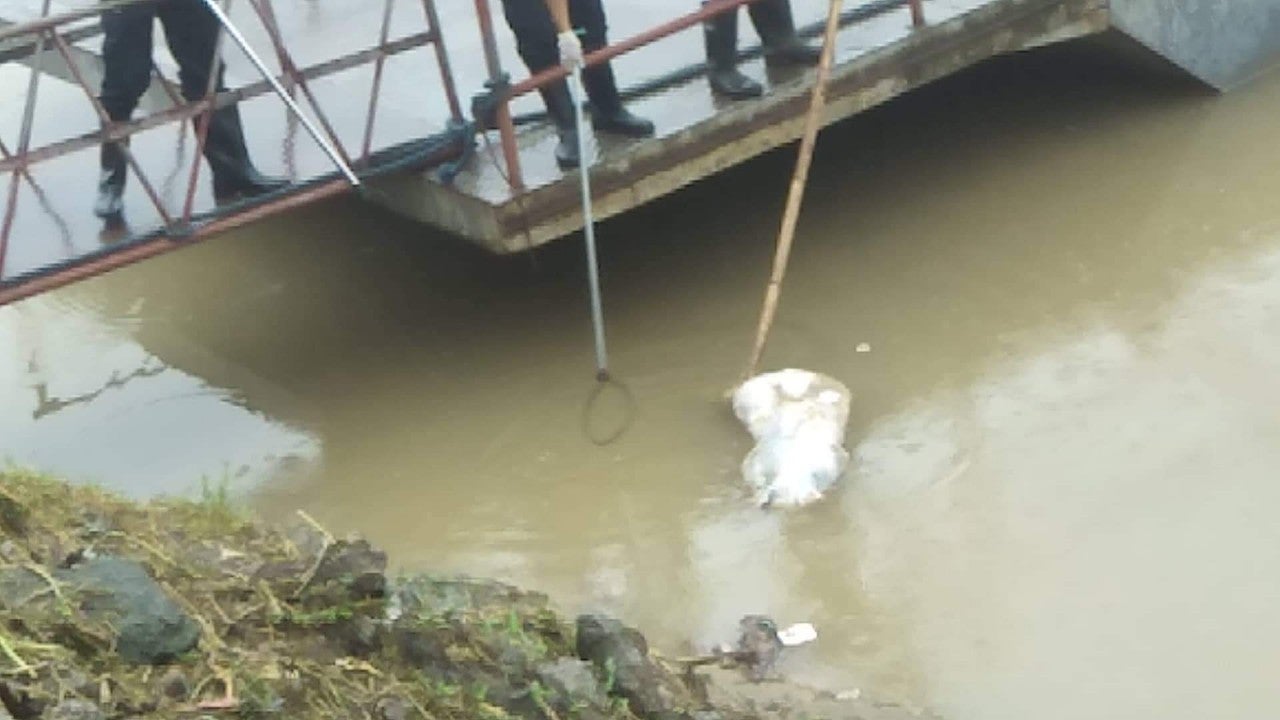 One of the 40 pig carcasses found floating in the Marikina River. Photo from Marikina City Veterinary Services Office.

MANILA, Philippines — The government of Marikina has ordered the dispatch of a “search party” to trace the source of the pig carcasses found floating in the city’s river.

Marikina City Mayor Marcelino Teodoro said he would want those responsible for dumping 40 pig carcasses in the Marikina River, to be held liable.

On Thursday, the Marikina City Veterinary Services Office (VSO) buried the dead pigs 10 feet below the ground to “ensure that possible diseases brought by the dead pigs will not spread.”

VSO chief Dr. Manuel Carlos said they are working with the Bureau of Animal Industry to get blood samples taken from the carcasses tested to determine if the pigs were killed by the African Swine Fever (ASF).

Teodoro meanwhile ordered a ban on fishing and other water-related activities in the Marikina River as authorities are still checking on the quality of water as well as determining possible contamination.

“We are checking if may river contamination. We are checking the water quality para mapangalagaan ang well-being ng Marikina residents,” Teodoro said.

Carlos said it is possible that the pig carcasses found floating in the Marikina River could transmit diseases.

The Department of Agriculture previously said that it was monitoring areas in the country where there were recorded deaths of pigs to block the spread of ASF. /muf

Read Next
WATCH: Commuter tries his luck by hanging on to jeepney, but ends up getting dragged on road
EDITORS' PICK
Military on heightened alert in Maguindanao after BIFF attacks
Smart releases Hyun Bin’s second TVC
For nation’s birthday, Trump slams the enemies within
Give anti-terror law a chance, ditch misinformation – Defense Sec. Lorenzana
Water remains our saving grace right now
EuroMillions Superdraw: A lottery draw unlike any other is coming to the Philippines
MOST READ
NAIA Terminal 3 to open for international flights starting July 8
Hyun Bin: ‘I will meet with my Filipino fans first’
BI officers sacked for ‘fictitiously’ encoding Wirecard COO’s entry to PH
Anti-Terrorism Council’s first move: Make a list
Don't miss out on the latest news and information.