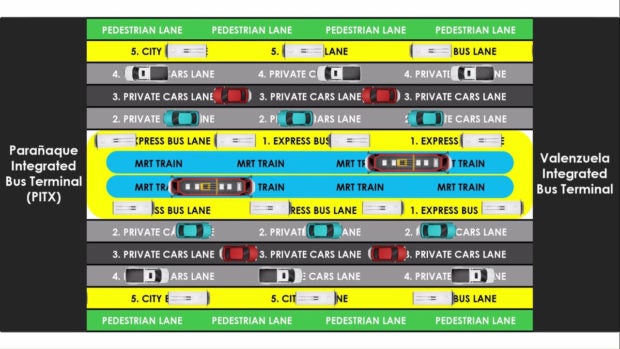 Sarmiento, a civil engineer by profession, believed that his pitch would “turn Edsa’s rowdy and chaotic city buses into a fast, efficient and predictable mass transport system.”

Under Sarmiento’s plan, the innermost lane of the metro’s main highway would become an “express bus lane” that could be accessed through Metro Rail Transit Line 3 (MRT-3) stations. The “express bus lane,” he added, would circle Edsa, duplicating the route of the MRT-3.

“The buses will only load and unload passengers in a synchronized manner at the MRT stations so they are basically an extension of the MRT. Walang magiging traffic dyan because the entire inner lane from Taft Avenue to North Avenue and vice-versa will be enclosed and exclusive to the express bus lane,” Sarmiento said in a statement.

The congressman then said the three lanes in the middle of Edsa would be available for all types of private vehicles subject to the existing vehicle reduction programs like the number coding scheme. Private cars will only be allowed to use the outer lane when turning into an intersection, he added.

Meanwhile, the outermost lane of Edsa or the “yellow lane” will be used as an exclusive city bus lane which would also follow a centralized and synchronized dispatch system, with designated bus stops that are one kilometer apart.

Sarmiento said his proposal, which was a product of his consultations with the Department of Transportation and the Metropolitan Manila Development Authority, is still open for modification.

The congressman likewise proposed that a similar carousel-type bus system be implemented in other major roads of Metro Manila.

This system, if implemented properly, would eventually encourage private vehicles to use public transportation, according to Sarmiento.

In an interview with Radyo Inquirer 990AM also on Friday, Sarmiento said that while the bills granting President Rodrigo Duterte emergency powers to solve Metro Manila’s monstrous traffic jam could be another solution, improving the mass transport system should also be prioritized.