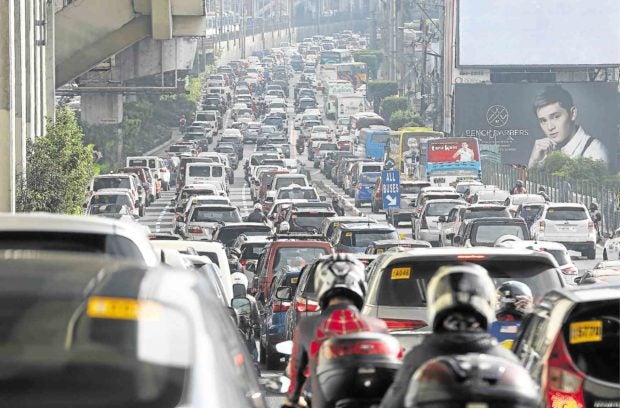 Samar Rep. Edgar Mary Sarmiento, chair of the committee, said Speaker Alan Peter Cayetano wants the traffic problem in Edsa to be solved within a year. A series of hearings would be conducted to tackle this plan, he added.

“Speaker Cayetano wants our traffic problem in Edsa to be solved within one year. Edsa’s traffic problem is causing too much economic losses for the government and for our people on a daily basis,” Sarmiento said in a statement Monday, noting that based on estimates by the National Economic Development Authority, the country is losing at least P3.5 billion a day due to the Edsa’s traffic problem.

The congressman claimed there is a need to seriously look at proposals to consolidate the franchise of all Metro Manila bus companies and apply a centralized and synchronized dispatch system in the Metro’s infamous 24-kilometer highway.

Sarmiento said that there are “way too many bus units on Edsa” and “most of the time, especially during off-peak hours, their load factor are less than 50% which makes them inefficient in the use of road space.”

“These 3,000 to 4,000 city buses are being operated by 200 different franchises or two dozen or more operators or owners. These buses compete with each other creating chaos,” Sarmiento noted.

The recommendatory panel, he said, could also set key performance indices such as headway should be as short as 30 seconds, reliability of the buses should be 99 percent, and buses should be very clean.

Cayetano has also tasked the transportation panel to look into the practice of boundary system in bus companies, according to Sarmiento.

Also part of the possible roadmap, the lawmaker said, is the modernization of the fare collection system of all city buses.

In its latest attempt to ease the traffic jam, the Metropolitan Manila Development Authority (MMDA) held last week a voluntary dry run of the controversial provincial bus ban along Edsa, a scheme which made “people suffer more,” according to opposition Sen. Francis Pangilinan.

“Commuters who make up 70% of road users use only 20% of the roads, but their space is further being limited? We ask not only for consideration, but also for the use of logic,” he said.

MMDA spokesperson Celine Pialogo had admitted that the dry run was unsuccessful.