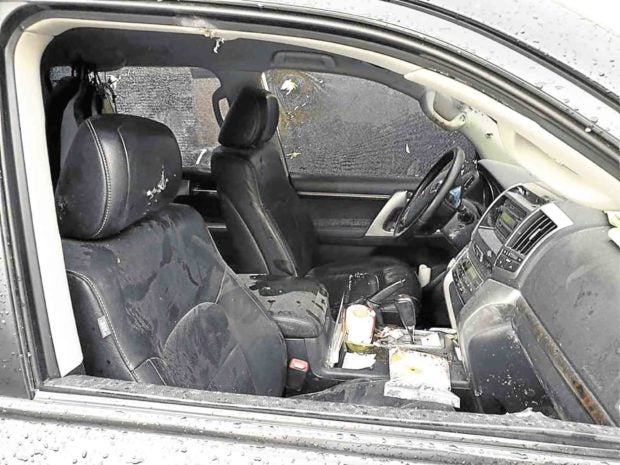 PANGASINAN HIT Former Pangasinan Gov. Amado Espino Jr. was traveling in this vehicle, a Toyota Land Cruiser, when armed men ambushed his group in San Carlos City on Wednesday. Espino was wounded while two of his five security aides died in the attack. —CONTRIBUTED PHOTO

MANILA, Philippines — Police on Friday said it has already identified the owners of two vehicles used by the assailants in the Sept. 11 ambush of former Pangasinan governor and congressman Amado Espino Jr. in San Carlos City.

Lt. Col Mary Crystal Peralta, spokesperson of the Police Regional Office 1 (Ilocos Region), said the PNP already established the identities of the owners of the Ford Everest and Hyundai Elantra used by the gunmen. The INQUIRER.net, however, is not releasing these names pending the result of the police investigation.

In a press briefing, Peralta said that the blue Ford Everest was abandoned by the assailants in Barangay Pasima, Malasiqui town in Pangasinan, while the red Hyundai Elantra was also abandoned in Barangay Cobol in San Carlos City.

A third vehicle, a black Toyota Wigo, has yet to be recovered by the police.

Peralta told INQUIRER.net in a text message that the police are still investigating if the two recovered vehicles were carnapped.

Espino’s two-car convoy was waylaid on Wednesday afternoon in Barangay Magtaking before gunmen opened fire. Espino survived the ambush, but his driver and one of his police escorts died.

She said that the police will also invite in their office the owners of the two vehicles, where high-powered firearms and ammunition were found, to possibly help in the investigation.

“Wala po silang dapat ipagtago kung alam po nila sa kanilang sarili na malinis ang kanilang konsiyensiya, at may due process naman [They do not have to hide anything if they know that their conscience is clear, and there is due process anyway],” she said.

Peralta said the assailants might have left the vehicles since they feared to be subjected to checkpoint operations and that their long firearms would easily be noticed by the police.

She said the police have already secured several witnesses and are checking footages from nearby closed-circuit television cameras to establish the case and determine the motive behind the crime. /jpv