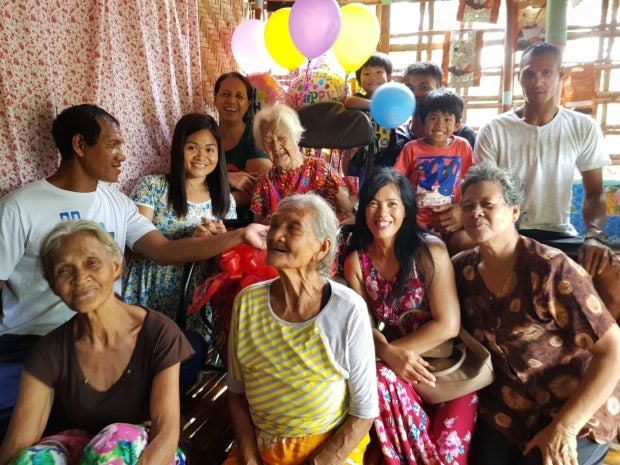 Francisca Susano (white hair back row) celebrated her birthday with her family in Barangay Oringao, Kabankalan, Wednesday, in this photo furnished by her grandaugher Helen Susano Cachero.

The family of Francisca Susano had a simple celebration in her home in Barangay Oringao, Kabankalan City, Negros Occidental.

Numerous visitors to greet her came, including the local police who brought her a gift.

According to her granddaughter, Helen Susano Cachero, Susano was born on Sept. 11, 1897, which means she is 122 years old.

She said they were already processing her official recognition as the world’s oldest person since The Guinness Book of World Records has stated that Kane Tanaka from Fukuoka, Japan, has been officially confirmed as the oldest person in the world, living at 116 years and 66 days old as of March 9, 2019.

According to her relatives, Susano, a mother of 14 children, used to be a farmer, which explained why she loved to eat fresh vegetables.

Helen said on good days, her great grandmother would sit up, smile and sing.

But when she was in a bad mood, she would not go out of bed, would not talk and would sometimes cry. /lzb